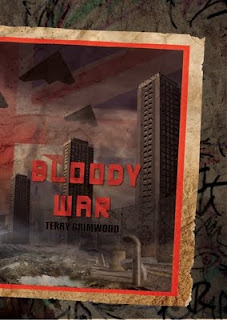 I've always thought that the central technical challenge in writing speculative fiction is how to get all that back story across to the reader in a way that feels seamless and unobtrusive. I don't think the problem has ever been really solved. Of course, you can always just whack in a large passage of straight exposition, but I think most writers would consider it cheating, and the received wisdom is that readers will get bored wondering when the characters are going to show up. Not much subtler is to include excerpts from a future history textbook, or even to have the protagonist sitting a history exam which helpfully fills in the reader on what's been happening over the last hundred years (I seem to remember Thomas M. Disch doing this is in the excellent 334). Most speculative writers nowadays seem to try and sneak in clues here and there in dialogue and passing references to the imagined future past ("Professor, you know as well as I do that before Man interbred with fruit bats we were incapable of flight"). The more confident just charge straight in with a barrage of invented slang and technical jargon and expect readers to keep up.


In his latest novel Bloody War, Terry Grimwood opts for the solution first put forward by H.G. Wells in The Sleeper Awakes: have the protagonist wake up with no memory of anything that's happened during a crucial period. He will have to spend a good portion of the first half of the book wandering round asking stupid questions and listening to the incredulous replies of those in the know.

Unlike Wells' protagonist, Pete Allman doesn't fall asleep for two hundred years. He's merely recovering from an appendix operation when he wakes one morning to find that Britain has been transformed into a modern-day version of World War Two, where bomb shelters, blacked-out windows and the Spirit of the Blitz coexist with USB sticks and reality TV shows. Baffled and assuming some memory loss, he makes several useful faux-pas before it transpires that for the last 18 months the country has been involved in a total war against a shadowy organisation called the Enemies of Democracy, whose air-raids have reduced large swathes of London to rubble. Civil liberties have been drastically curtailed, the internet switched off, and conscription enforced for every male youth on his eighteenth birthday. And as luck would have it, Pete's son is about to turn 18.

What follows is an increasingly grim, at times almost impossibly bleak, journey for the confused protagonist, as his botched attempt to save his son from the draft, and simultaneously pass secret information to a bunch of disgruntled veterans, ends with him on the run from the authorities, desperately trying to escape from a blockaded London. When he finally manages to get beyond the wall that has been erected around the capital, he's faced with an apocalyptic vision; the totalitarian State has managed to reduce the population to either prisoners, scavengers, soldiers or marauding sex traffickers. And as he trudges his weary way to the coast, it doesn't get any jollier.

What the author is good at is painting his protagonist into ever tighter corners. He's at his best imagining the details of, say, how his exhausted man might cope with rowing a tiny boat across a strong current, or how one might go about dressing a flesh-wound in the heat of battle given no practical experience of first-aid, or evade the secret police in WHSmith. These moments of desperate concentration are precisely imagined, and one has the impression that the author is keen to get the details right. There is a danger that with this unrelenting increase of pressure, the first thing to snap will be the reader's patience. Successful Hollywood thrillers ease the pressure off now and again, only to ratchet it up another notch at the next crisis. It repeatedly offers the audience the chance to hope that perhaps everything is alright now, when of course, it's not. If there's just no let up in all the dreadfulness, the viewer/reader will run out of patience and stop taking it seriously. And once they've seen the funny side of your apocalypse, you've lost them.
The plot is tightly wound, and rolls out neatly from its original premise with considerable momentum. The protagonist single-mindedly pursues his goal, and everything is tied up carefully at the end. There are no dangling tangents or flabby chunks of dialogue left lying around. It kept me interested enough to find out what on earth was going on.

Having said that, I can't say that I really enjoyed reading Bloody War. The main problem was with the protagonist's tone. There was something far too blokeish and average-Joe about the way he tells his story and explains himself. This is how he introduces us to his family:

"Amanda, the older one, is fourteen, blonde and already frighteningly beautiful. However, looks aren't everything. My sweet little Amanda has turned into a sulky, explosive and utterly selfish little princess. But there are moments when the other Amanda, the kind one, the funny one, wins through. Rachel sits opposite her, she has my dark hair but her mother's brains, thank Christ. Rachel is bright and sharp and a little too serious. Still, she's only twelve, she'll lighten up when she's good and ready.

I sit next to our son, Dominic (not my choice, I'd have called him Steve). He'll be eighteen on Sunday. He's dark too, and like his younger sister, has his mother's wit and intelligence. He's got a job as an apprentice electrician and is doing well at college and with his company. No girlfriends yet though, well, none that he's ever talked about or brought home."

It's the sort of flavourless mush you wouldn't be surprised to hear at the beginning of a BBC1 teatime family sitcom, delivered by the long-suffering dad straight to camera. Elsewhere, explaining his stint behind bars, he reads like an errant footballer's autobiography:

"Those months spent in that hell hole not only pushed me nearer to the edge than I'd ever been before, it also opened my eyes to the fact that I have a brain in my head, that it works a hell of a lot better than me or anyone else realised and using it was the only thing that was going to save me."

There are far too many easy tabloid platitudes in all of this. We're meant to get a picture of a down-to-earth ageing biker who's made a few mistakes in his youth but who Loves his Family and basically Has His Heart in the Right Place. And despite all the appalling trials he is put through, that's pretty much all we find out about how Pete Allman’s mind works.

The other, related, problem is to do with letting the reader feel things for herself. For instance when the protagonist realises that the British Army are using flame-throwers not only on the war-dead but also to get rid of their own wounded, I can already appreciate how awful this is, without having to be told so twice:

"I hear another flamethrower roar, and this time a cry, brief, lost in the oily, searing blast.

Christ, they're burning the wounded.

This sort of spelled-out emotional anguish, spread far too thick, spoils an awful lot of passages that with some judicious editing could have been actually emotionally engaging. Instead the reader is repeatedly bashed over the head with redundant emotional subtitles.

More careful editing and proofreading would have also eliminated the fairly frequent typos (at least in the PDF I received for review), some of which would have been picked up by a spellchecker (e.g. "uaccountably", "of ocurse"). Elsewhere I noticed confusion between "there" and "their" among other basic errors. It doesn't make the novel unreadable, but it's more evidence of under-editing. I think one could probably cut about 15–20% of emotionally overloaded text, and Bloody War would be significantly improved.