Received for review - June and July! 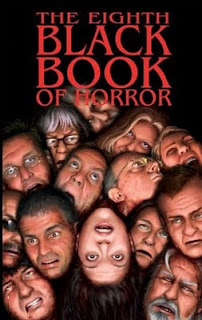 The Eighth Black Book of Horror, by Charles Black (ed.) (Mortbury Press, Paperback, 200pp). The latest in the long-running anthology series. This volume features Stephen Bacon, Gary Fry, Reggie Oliver, Paul Finch, Marion Pitman, Thana Niveau, Mark Samuels and many others, all of whom can be seen in decapitated form above: surely one of the best ever ideas for the cover of a horror anthology.

Conan the Barbarian: The Mask of Acheron, by Stuart Moore and Gabriel Guzman (Dark Horse, Comic, 64pp). A tie-in to the Jason Momoa powered film, which I'm a lot more excited about since watching him in A Game of Thrones.

Do Not Pass Go, by Joel Lane (Nine Arches Press, Chapbook, 44pp). A very handsome little book on very sturdy paper. I loved the previous book I read by Joel Lane, and I'm really looking forward to this one.

Dragon's Time, by Anne and Todd McCaffrey (Bantam Press, Hardback, 326pp). Reading this at the moment. It's not terribly good so far.

Falling Skies, by Paul Tobin and Juan Ferreyra (Dark Horse, tpb, 104pp). A review of this one is almost ready.

Ill at Ease: Three New Stories of the Macabre, by Mark West, Stephen Bacon and Neil Williams (PenMan Press, Ebook, 36pp). I've enjoyed stories by Stephen Bacon and Mark West in the past - I included Stephen's post-apocalypse story "The Other Side of Silence" in Dark Horizons 57.

Johannes Cabal: The Fear Institute, by Jonathan L. Howard (Headline, Hardback, tbc). The previous book in this series was a lot of fun, but I'm finding it hard to get excited about sequels these days. One thing that was mildly exciting: seeing a quote from my review of the previous book on the PR sheet!

Pride and Prejudice and Zombies: Dreadfully Ever After, Steve Hockensmith (Quirk, pb, 288pp)

Queen of Kings, by Maria Dahvana Headley (Bantam Press, Trade paperback, 444pp). In the thanks she calls a reviewer out on "bullshit" for criticising the length of the acknowledgment page of a previous book! Neil Gaiman's cover quote describes this as "a powerful work of the imagination".

Ready Player One, by Ernest Cline (Century, Paperback, 376pp). This looks very much like the kind of thing I would enjoy; how much I do might come down to whether the book gets gaming right. One cover quote gives it an awful lot to live up to: "this generation's Neuromancer"!

Rules for the Care and Feeding of Tiffany, by Darby Krenshaw (ebook, Untreed Reads, 177ll).

Skaldenland, by Jim Mortimore (Obverse Books, Paperback, 372pp). Jim Mortimore was responsible for getting me back into Doctor Who after a long period away - a pristine copy of a New Adventure he co-wrote, Lucifer Rising, turned up on the discards shelf at Reading Library (either a mistake, or someone thought the title inappropriate for their kids section), and before long I'd read dozens of them. Course, that was when I should have been revising for finals, so I guess Jim Mortimore was responsible for that as well...

The Crown of the Conqueror, by Gav Thorpe (Angry Robot, Ebook, 7013ll).

The Straight Razor Cure, by Daniel Polansky (Hodder and Stoughton, Hardback, 360pp). The cover design of this print ARC at first made me think it was a self-published novel. The PR info makes it sound interesting, though - "in the tradition of Dashiell Hammett and Gene Wolfe" - I'm not sure what tradition those writers share! The book's an uncorrected proof, not for sale (which is fair enough) or quotation (which may make it reviewing it tricky).

The Watchers, by Jon Steele (Bantam Press, Hardback, 556pp). A novel by a former ITN cameraman who worked in war spots all over the world.

If you have anything you'd like us to look at, there's some information here. Thanks to everyone who has sent us stuff for review, and apologies once more for the fact that we won't get through everything!
Posted by Stephen Theaker