The Bride That Time Forgot by Paul Magrs – reviewed by Michael W. Thomas 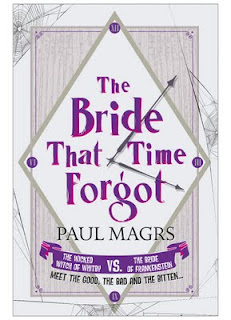 The Bride That Time Forgot belongs in a long, honourable tradition. Doom-laden goings on can be engrossing in themselves, but even more so, often, when placed right in the middle of the mundane. Both worlds can gain immeasurably by the interaction. Elm Street is a perfect harbour for nightmares precisely because of its picket-fenced babysitter schedules. Several of Wells’ scientific romances draw the reader in because the scene of the action isn’t Planet XG499 but Bromley or Lewisham, because key characters are less likely to bark anxieties about a wayward flux capacitor, more likely to gasp “Blimey” and “Strewth”.

Paul Magrs’ latest novel draws together the known and the feared in just this way. The setting is Whitby, the very name brimming with connotations of the undead, of Stoker, ghastly shipwreck, swaying coffins. But its narrator is Brenda, owner of a bijou little B&B, “open for business and filled up for fifty-two weeks of the year”. As the novel progresses, Magrs’ Whitby itself fills up, with characters from this side of the life-death line, characters from the other, and characters with one foot in the light, one in the dark. This last category includes Brenda herself, who is given to drop little teases about her various adventures into the twilight zone, in between plumping guests’ pillows and getting in extra stocks of shower gel. We meet her friend Effie, sometime co-sleuth in her perilous adventures but now besotted with the sinister (and blood-hungry) Alucard; Robert, manager of the Hotel Miramar, who is set (in his own mind, anyway) to take Effie’s place on Brenda’s dark excursions; Marjory Staynes, proprietress of the Spooky Finger bookshop – and, through her, the (to Brenda, at least) disturbingly hovering presence of novelist Beatrice Mapp – and, through her, the Warrior Queen of Qab.

The ingredients, then, are all there for what other reviewers have noted as a glorious collision between Alan Bennett and The League of Gentlemen in Magrs’ work. Sadly, they don’t quite cohere. Strands are woven, hares set running. Brenda drops her hints that she isn’t a mere inhabitant of the daily round, thank you very much: her past is filled with to-dos in the unknown. After a certain point, however, a novel has to declare its hand: particular hints have to be taken up, confidently run with. Similarly, characters come onstage at a brisk rate, but it isn’t always easy to determine their relative importance to Brenda or each other – even when she seems to make it clear (which is a rather curious consequence in a piece of fiction). Overall, though there are bravura passages and some sense of climax and denouement, the narrative somehow doesn’t seem to know, at least not consistently, how it wants to be significant.

The reader can also be wrong-footed by inadvertent time-slips. At one point, Brenda heads for the Miramar Hotel on a quest to learn more about the life and works of Beatrice Mapp. She finds what she wants through the good offices of her friend Penny and the hotel internet. We are left in no doubt that it’s evening: a Sixties Night is in full swing, the soundtrack including “’Paper Sun’ by the Small Faces” (Traffic, in our world). Brenda asks Penny if she’ll bring the Beatrice Mapp information to the B&B:

“Penny nods readily. ‘Yes, of course. And Robert and I are both free tonight.’
‘Very good. Seven o’clock. I think I’ll give Effie a ring.’”

Immediately we wonder if this conversation is taking place much earlier. Or perhaps “Sixties Night” is being used as a generic term for all-day frivolity. But no – Brenda is clear on the point: “Sunday evening I’m full of purpose and directing my feet towards the Miramar Hotel.” It’s very tempting to say Such slips wouldn’t matter if…. But they do matter, and their occurrence raises questions about degree of structure and control in a whole narrative.

There is indeed entertainment to be had found in The Bride That Time Forgot, as well as some memorable characters (Gila, the loin-clothed scourge of vampires, comes to mind). That said, more tightening and polish – another go-round with the awful but vital blue pencil – would have guaranteed its appeal from start to finish.