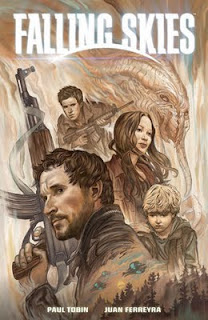 Reading a tie-in comic before seeing the programme it was based on really took me back. Everyone remembers the moment when Darth Vader told Luke that (spoiler) he was his father. Not me: I found out about it for the first time in the pages of Marvel UK's weekly Revenge of the Jedi comic. Spock's death scene, also: I read those immortal lines in the comic first. I'm not sure if this book acts as a prelude or an adaptation (the introduction was illegible in my review copy), but for me it failed in one key respect: it put me off watching the programme.

It's not a bad comic. It's well written, putting diary entries to good and effective use as captions, and illustrated well: the likenesses are good enough that I was able to guess Noah Wyle as the lead from the second page. Across the five chapters lots of exciting stuff happens, the characters are all introduced and distinguished, and the book begins to make the reader care about Tom Mason and his sons' attempts to survive an alien occupation.

But it does nothing to sell the premise. No story possibilities unfold before us. Nothing to make the reader think it would be worth committing to this story for the next five to ten years. At best it promises The Walking Dead with aliens instead of zombies, at worst Jericho on the cheap. I didn’t tell TiVo to record the programme. I meant to – it looks alright, and may well be brilliant – but the comic did nothing to stir any enthusiasm. It's a decent comic, but a poor advertisement.