Kindle in the UK, almost a year in 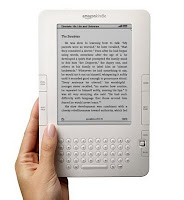 Amazing to think that it is still less than a year since Kindle launched in the UK, given the impact it's had…

The bigger Waterstone's in Birmingham already looks like a gift shop downstairs, although I suppose that's not just down to Kindle – it's Kindle on top of all the bookselling Amazon was already doing. It's always been hard for Waterstone's to compete with Amazon's wide range of books, its low prices, and (not a minor issue for me) the good condition of the books on sale. But I think Kindle's the straw that's prodding them over the edge.

It was very nice on holiday this past week to have The Guardian delivered to the Kindle first thing each morning, and that finished I had dozens of books and audiobooks on there to choose from. The free internet access came in very handy as well. On the iPad, I had a bunch of graphic novels, the British Library's brilliant 19th Century Books app, articles, stories and interviews in the McSweeney's app, and access if I needed it to hundreds more books stored in Dropbox (use this referral link to earn me bonus space!).

It was also very nice to know, given where I live and what was happening here while I was away, that a big chunk of my book collection would survive any fire.
Posted by Stephen Theaker