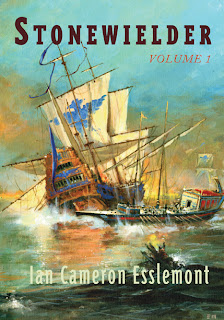 I read quite a lot of heroic fantasy as a youngster: Tolkien, Eddings, Brooks, Conan (mostly spin-offs rather than the Howard originals, I’m afraid), Donaldson, Leiber and lots and lots of Moorcock. I kind of fell away from it as the books got longer and longer, and I went through a long period of reading barely anything but comics and Doctor Who novels. But in recent years I’ve started to enjoy my fantasy a lot more, reading and getting quite excited about books by Joe Abercrombie, William King and Steven Erikson - and Game of Thrones is my favourite new television programme of the year.

This novel, of which I’m currently reviewing only volume one (the PS Publishing edition is divided into two luxurious hardbacks) seems to share the setting of the Erikson novellas I’ve read, such as Crack’d Pot Trail, and shares those novellas’ knack of seeming self-contained enough to be enjoyable in isolation, even if those who have read Esslemont’s two previous novels in the series will get more from it. The story concerns the subcontinent of Fist, isolated for twenty years from the Malazan Empire, yet still being ruled in its name. The Empire has decided to set matters straight and despatches a fleet of reconquest. Meanwhile, the Chosen of the Stormwall (and their prisoners) prepare for another assault by the frost-wielding Stormriders, who have been coming from the ocean to throw themselves against the wall for centuries.

We meet a huge cast of characters on both sides of the conflict, and those likely to get stuck in the middle. Each character is clearly and effectively defined, each has their own voice, and is surrounded by figures who help to define them in relief. Ivanr, the farmer with a bloody gladiatorial past who joins an army of peasants. Hiam, Lord Protector of the slowly crumbling Stormwall. Greymane, the Stonewielder of the title, recruited from obscurity to lead the expeditionary force. Bakune, Chief Assessor of Banith, doggedly investigating a series of murders. This rich selection of characters contrasts with, say, Dragon’s Time by Todd and Anne McCaffrey, in which, presented with a paragraph of names two hundred pages in, I had no idea who most of them were.

Stonewielder isn’t as artsy and literary as the Erikson novellas, and it’s a world away from most PS Publishing books, but it is a well-polished, confident and commercial novel that repeatedly made me stay up just a little too late to get to the end of a chapter. And among all the fighting there’s a good deal of wisdom and humanity. “It takes an unusually philosophic mind to accept that all one’s suffering might be to no end, really, in the larger scheme of things,” Ivanr thinks at one point. This volume builds up to a clever and tactical sea battle, as the Malazan fleet tries to break through the Mare war galleys to land its armies on Fist, but the reader is left in no doubt that there is an awful lot more to come. I’m glad of the break between volumes - reading the whole thing at once might have been too much of a good thing - but I won’t leave it too long before returning to see how this campaign concludes.

In the eARC under review there were a handful of typographical issues - mostly missing spaces and quote marks. All were probably fixed before the book went to press, but since we’re talking about a collector's edition that costs £99, I mention them just in case!