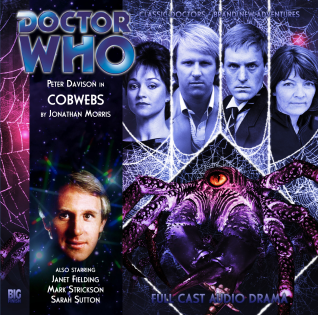 Funny how nostalgia works. As a boy, I didn’t really enjoy Tegan and Turlough bickering with the fifth Doctor in the Tardis, but now they’re back and doing it again the cockles of my heart are well and truly warmed. Throw in my favourite companion from that time, Nyssa (bumping into them fifty years after they left her skirtless on Terminus) and it’s as if someone built an extension to my childhood. Even if the story proved to be a complete dud, I would still be hugely grateful to Big Finish for bringing these actors together again. (Especially since I originally missed half their episodes, thanks to the BBC scheduling them against cubs night!)

But it’s far from a dud. Jonathan Morris’s story follows straight on from Enlightenment (1983), with Tegan still furious over Turlough’s dealings with the Black Guardian. Nyssa, accompanied by robotic personal assistant Loki, has travelled to Hellheim in search of a cure for an interstellar plague. The Doctor has been summoned there – by whom is a mystery; the first but not the worst. Investigating the station brings to light a quartet of cobwebbed skeletons, one of them wearing a school uniform that looks very much like Turlough’s, another wearing a cricket sweater like the Doctor’s, and so on. It’s a pretty bleak way to begin a new series of adventures!

Add to that a series of deadly hallucinations and a crazed computer, and quicker than you can say Hal 9000 they’re thrown back in time to face a fate the Doctor thinks they can’t avoid. Tegan and Turlough, as ever, but for once with good reason, are disinclined to take his word for it, but find few friends among the station crew, company workers and scientists whose memories have been wiped, supposedly to make more room for thinking about their work. This makes for many interesting developments and double crosses as they learn about their own true motives, goals and characters.

The tense situation gives the Tardis team some meaty stuff to row about; it feels properly dramatic, rather than the empty noise and fluster we sometimes saw on screen – it’s ironic that the mildest of Doctors had the most tumultuous Tardis! For fans of the era this really hits the spot. It feels authentically of the period, delivering the kind of ethical and moral drama that period aimed for, but hitting the mark rather better. It also benefits from the absence of that period’s less-loved features: tabloid-friendly guest stars, over-bright lighting, implausible motivations and shopping list plots.

I was especially pleased by the resolution of the story’s big mystery: the cobwebbed skeletons. Expecting a cop-out, I got something much more interesting, and even rather touching. The story of this reunited team continues in The Whispering Forest by Stephen Cole, and The Cradle of the Snake by Marc Platt.