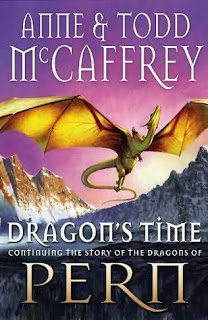 Dragon’s Time is essentially a novel of logistics, rather than adventure or discovery. Pern will soon be menaced by Threadfall, but there aren’t enough dragons and dragonriders available to incinerate the thread, so what can be done? The answer is simple: send all the young and injured dragons back in time a few years so that they’ll be ready to fight. (Which, from mentions of previous events, seems to have been the plot of at least one previous novel too.)

That may seem a rather simplistic approach to time travel, but this isn’t the kind of book where people worry about stepping on butterflies. When Lorana’s dragon needs a bite to eat, she pops back "to a time when the game she wanted would be plentiful" (p. 150). Everyone’s concerned about "breaking time", but events always seem to play out the way they always did so there’s never really any need to worry about the consequences of their actions in the past.

According to the back cover, SFX described a previous book as "a pleasant, feelgood read … the sort of thing that it’s good to sit down with on a rainy day", and that sounds about right for this one too. Unlike, say, the later Elric books, this novel isn’t challenging or innovative; it’s cosy product to feed the fans and service a market. But the cosiness goes a little too far, easing into blandness, both in prose - “The brown rider gave the wiry bronze rider a startled look and shook his head swiftly” (p. 51) - and characterisation.

The characters, especially in the first couple of hundred pages, all seem to talk in the same way, have similar outlooks, similar reactions, and are differentiated only by age and social group, making them quite difficult to tell apart. They almost seem like NPCs in a computer game, so limited is their range of reaction and facial behaviour. Eyes go wide again and again and again – twice on page 171 alone!

Everyone here is so nice and reasonable that it’s tempting to imagine them as members of a cult. Those who don’t fall in line are swiftly punished: when a trader speaks with the slightest hint of malice, he’s told (p. 156), "Speak not for another month, and trade not for thrice that." Poor Abab – he was just trying to add a refreshing new dynamic to the conversation!

And as with many cults, there’s some odd sexual stuff going on. Fiona, leader of the Weyr, takes in a ten-year-old boy, sits him on her lap, shares her bed with him, takes baths with him - and is disappointed when thirteen-year-old Terin doesn’t join them. That same Terin shares her bed each night with F’jian, but feels she’s too young as yet for sex; when he appears to be sneaking out to get laid each night she’s told by everyone to forgive him.

"So if I forgive him, then I can love him?" says Terin (p. 102). "Pain’s part of love, sweetie," says Fiona. Terin then offers to share her bed with ten-year-old Jeriz, whose "eyes went wide" and "lit with pleasure" – I bet they did! A hundred pages in I still wasn’t sure why Fiona was sleeping with Kindan every night when she was married to T’Mar, who is also married to Shaneese.

In another book, the tone might seem less odd, but these people are engaged in an awful struggle for survival, where even basic human functions are under constant attack. Women – and dragon queens – lose their babies, yet everyone talks and emotes like characters in a Disney Channel original movie. They get a bit testier when people start dying, but there’s still plenty of time for high school romance.

Little seems to happen here that hasn’t happened before: the overwhelming purpose of the book seems to be to fill in the gaps of previous entries in the series. The biggest mystery of the book – why all the dragonriders are so exhausted – is given away by the dustjacket description, and knowing that also makes the lucky recipient of K’jian’s midnight booty calls pretty obvious.

In short, Dragon’s Time reads like well-polished fan-fiction. It’s competent; a competent tie-in, you might say – the introduction makes it plain that this is principally a novel written by Todd rather than Anne – but not a particularly exciting one. It is all preparation, and very little action. Fans may simply be happy to spend more time with these characters, but although it works hard to bring new readers up to speed, it ultimately has little to offer them.