Journey into Space: The Red Planet, by Charles Chilton – reviewed by Stephen Theaker 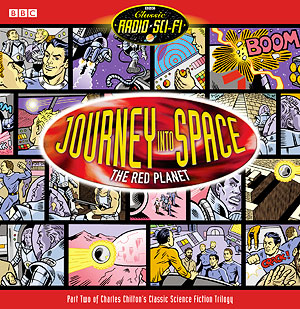 The Red Planet was the second series of Charles Chilton’s Journey into Space; twenty episodes, here spread over ten CDs with notes researched and written by Andrew Pixley, that were originally broadcast weekly from August 1954 to January 1955 on the BBC Light Programme. Though for this listener the adventure took a single week rather than twenty, its epic qualities seemed undiminished.

The first eight episodes detail the journey from Earth to Mars, a trip punctuated by much eerier incidents than expected; this is science fiction in the vein of The Quatermass Experiment rather than Flash Gordon. "Orders must be obeyed without question at all times" is the refrain of James Whitaker, who gives everyone the willies, but from where do his orders come? By the time Jet Morgan (played by Andrew Faulds) and the surviving members of the expedition reach their destination they've been well and truly frightened, even if it barely shows behind their stiff upper lips. On Mars it gets stranger yet, with hallucinations and... humans? Yes, the people we meet on this ancient, worn-out Mars in the latter half of the serial are humans, snatched from Earth whenever the two planets were at their closest. Most are in trances, believing themselves still on Earth at the time they were snatched. The mysterious flying doctor, however, seems to know just where he is. But who is behind it all? And will the surviving astronauts really have to settle down to life on Mars?

Though the mission is led by Jet Morgan, the most notable character is perhaps Lemmy (David Kossoff), the resourceful radio operator and engineer which the liner notes say was based on writer Charles Chilton (in a short interview with Chilton on the tenth CD you hear strong echoes of Lemmy’s voice). The same notes reproduce a letter to the Radio Times where K. Camm of Stevenage describes Lemmy as "an improbable space traveller, not to mention electronic engineer", but so far as I could tell the only reason for thinking that is his London accent. Lemmy shows himself time and again to be capable, intelligent and an exceptionally useful member of the expedition. It's easy to see why he was popular with listeners. It’s a shame the other characters sometimes sound a bit patronising when they talk to him - and sometimes completely ignore him! - but well done to Charles Chilton for getting a working class man on board. (Even in the mid-sixties there was resistance in the BBC to having characters with regional accents in Doctor Who.)

Listening to The Red Planet was a total delight. Tense, dramatic and detailed, it's grown no less riveting with the passage of time (at least I’m guessing it hasn’t - if I’d heard it in the fifties I suppose I might have enjoyed it even more!). Like the humans Jet Morgan finds on Mars, it doesn’t seem to have aged, though the credit should go to Ted Kendall, who has restored and remastered the episodes for CD, rather than ancient Martian science! Thanks to an accidental membership of Audible, I also have Journey into Space: Operation Luna tucked away somewhere, so I'll be on my way to the Moon just as soon as I find a spare week. Readers are recommended to join Jet and Lemmy on their trip to Mars at the earliest opportunity.