A Thread of Truth, by Nina Allan - reviewed by John Greenwood 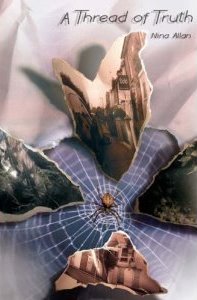 A Thread of Truth has been available since 2007, but I was keen to take a look at it after reading Nina Allan's story "Bellony", which was for me the highlight of Eibonvale's themed short story anthology, Blind Swimmer (see review).

Small towns, and attempts to escape them, do seem to preoccupy Allan, and she admits in her Afterword that she is often drawn to the "somewhat baleful Victorian spa town". In the first story of the collection, "Amethyst" I felt as though we were in similar territory to that of "Bellony": a gently decaying tourist attraction where unhappy family secrets fester. "Amethyst" are a fictional folk-rock band whose sole hit single names the main street of the town, for reasons that remain obscure to two bored teenage girls trying to unravel the mystery. Allan captures very nicely a desperate adolescent quest to find some mystery in one’s provincial existence. It's also a story of life before the internet, when information about the world had limits: the girls have to get their alien conspiracy theories from the local newsagent. One of the girls is bewitched by the possibility that their drab town might hold a mystical secret, the other is repelled by it. The deadpan humour makes much of their contrasting outlooks:


"Lorna Samway's song wasn't really about aliens, at least not that I could see. A lot of the words weren't in proper sentences and it was hard to work out what they meant. If it was about anything at all it was probably about breaking up with a boyfriend." (p.19)

The narrative flits about from folk songs to painting birds, to derelict garages, reluctant to move on with the unpleasant business of the story. The style is disjointed but unshowy, unsentimental and not a little emotionally strangulated. That Allan can reveal her protagonist's character through the style of narration is a rare achievement.

Allan writes from the perspective of a young male teacher with equal conviction. There are deliberate shifts in tone and style between each story, and in "Queen South", the most successful story in the collection, she opts for the close observation of minutiae. Her protagonist learns to see the world anew through his affair with an eccentric teenage school dropout. It has echoes of Billy Liar, updated for the 21st Century: instead of London, Japan is now the mythical land of freedom which tempts both the girl and the young teacher away from his domineering fiancée. Again it's a story about feeling trapped in provincial upbringings and unhappy family secret and characters who have Allan through the cracks in respectable society.

The story very cleverly sketches out the bones of this relationship in just a few telling and well-observed lines of dialogue. Were it not for a slightly heavy-handed metaphor about sex and precipitation, and a few awkward jumps backwards and forwards in time, I would find it difficult to fault at all.

Small town paranoia also infuse "Heroes" and "Ryman's Suitcase". Both paint very convincing portraits of communities where difficult things have been left unspoken for a long time. Again and again I was impressed by the restraint and brevity of Allan's writing, her unfussy but insightful dialogue, her protagonists who do not always think in straight lines. "Heroes", a tale concerning, among other things, pigeon racing, is rather too long and unfocused, and one gets the feeling that one is peeking into an artist's sketchbook. There are intriguing tableaux and detailed sketches there, but they don't necessarily add up to a coherent idea. "Ryman's Suitcase" on the other hand seems to finish too early. In both stories the central mysteries are never resolved. One senses that Allan is attracted to the trappings and effects of suspense writing, without wanting to deal with the mechanics of providing explanations and motives and tying up loose ends.

"The Vicar With Seven Rigs" and "Terminus" both feel like dream narratives, particularly the former, a coming of age story about teenagers breaking into a hotel. The universe painted here is recognisable but slightly off-kilter in subtle ways that are never made explicit. The characters don't seem to know much of anything that happens beyond their village, and the hotel seems to warp around them as the story progresses. In "Terminus", two parting Russian lovers become trapped on the Moscow underground at a station that shouldn't exist. Again, it's an almost plausible version of the world, but disturbing details hover at the corner of the eye.

"Bird Song at Eventide" is the only explicitly science-fictional story in the collection. Allan deals with a hackneyed subject (dragons) in her typical downbeat way, concentrating her attention on the semi-opaque relationships of the scientists whose job it is to monitor the creatures' habits.

Generally in these stories, characters refuse to put their cards on the table, unanswered questions remain so, conclusions are elided, sometimes very gracefully. The title story "A Thread of Truth" feels out of sympathy with this overall aesthetic - it's a more straight-forward "weird" tale about a young intellectual who tries to cure his arachnophobia with his own kind of aversion therapy, but finds himself in much deeper than he ever intended. Allan deals with the phobia very convincingly; there's real terror in the way she writes about an encounter with a very normal spider. But by the time one guesses the central conceit, we have descended into a familiar and more formulaic world of "shapeshifters". At least Allan has the restraint not to show any transformation of human to spider, or vice versa.

The style she adopts here is rather wordy, unlike anything else in the collection. Whether she does this deliberately to show the slight pomposity of the protagonist, or as an echo of the gothic fiction of an earlier age, I'm not sure. I did feel that here, unlike elsewhere, Allan is occasionally carried away by her own mellifluous prose:


"Sally Beamish passed me a mug, a white porcelain cylinder with a narrow golden band around the rim. The mug was warm to the touch, and brimming with milky tea." (p.184)

There's nothing in the story to suggest that the protagonist has not encountered mugs of warm tea before.

These criticisms aside, A Thread of Truth is an impressive debut collection, and I will be looking out for her name elsewhere (I have already noticed that she’s recently appeared in the anthology Crimewave 11: Ghosts). My hope is that she moves away from spider-women and dragons, and towards the more genuinely terrifying world in which she has already proved herself capable of remarkable things. It’s a world of characters struggling in the webs of small-town communities and the strange metamorphoses of loved ones into strangers and vice versa. While I didn't find every story entirely successful, there was something to admire in them all. These are all stories with a richly imagined sense of place, as well as acutely observed characters, and often the places seems to win out over the people who occupy them.