Theaker's Quarterly Fiction #72 is now out in paperback and ebook! 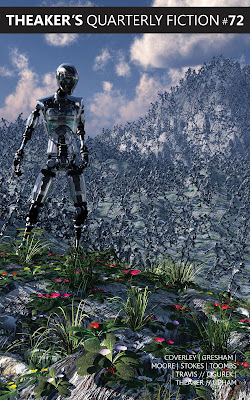 Plus reviews by Stephen Theaker and Douglas J. Ogurek of Anchor’s Heart by Cavan Scott, Monsters: a Field Guide to Blood-Thirsty Beasts by Dave Elliott et al, The Death of Captain America by Ed Brubaker et al, and She-Hulk by Dan Slott. The cover is by Steve Upham.

Our thanks to the contributors for their patience: it took Stephen far too long to finish off this issue. But we think you will find it is worth the wait. It might well be our best issue ever. We always say that, but we always mean it!

It is, as ever, available to download for free from the links above, and to buy on Kindle and in print at a remarkably low price.

Ross Gresham teaches at the Air Force Academy in Colorado Springs, CO. “Spending the Government’s 28” originally appeared in M-Brane SF Quarterly #3, while other stories in this series appeared in TQF34 (“Name the Planet”), TQF41 (“Milo Doesn't Count Coup”), TQF44 (“Milo on Fire”), TQF46 (“Wild Seed”) and TQF49 (“Ut in Fumum!”). Milo and Marmite also made an authorised guest appearance in TQF55 (“The Stone Gods of Superspace” by Howard Phillips).

Zachary Toombs is a writer and artist currently situated in Central Florida. Check out his publications in Fine Lines, Mad Swirl, Freedom Fiction and Against the Grain Magazine as well as his website, www.zacharytoombs.com.

Harris Coverley has had short fiction in Curiosities, Hypnos, The Periodical, Forlorn and Rivanna Review, amongst many others. A former Rhysling nominee, he also has had verse in Polu Texni, Star*Line, Spectral Realms, Scifaikuest, Tales from the Moonlit Path, Novel Noctule, Corvus Review, View From Atlantis, Yellow Mama and elsewhere. He lives in Manchester, England.

Ralph Robert Moore’s fiction has appeared in America, Canada, England, Ireland, France, India and Australia in a wide variety of genre and literary magazines and anthologies, including TQR, Reed Magazine, Black Static, Cemetery Dance, Shadows & Tall Trees, Nightscript, Midnight Street, ChiZine and others. He has been nominated twice for Best Story of the Year by the British Fantasy Society, once in 2013, and again in 2016. His books include the novels Father Figure, As Dead As Me, Ghosters and The Angry Red Planet, and the story collections Remove the Eyes, I Smell Blood, You Can Never Spit It All Out, Behind You, Breathing Through My Nose, Our Elaborate Plans and The Sex Act. His website is here.

Julie Travis is originally from London but now lives in the far west of Cornwall. She has had many short stories published in the British, North American and French independent press since the early 1990s, has two collections published by Wapshott Press and was nominated for a British Fantasy Award in 2020 for her novelette Tomorrow, When I Was Young (Eibonvale Press). Should you want more information, please see her blog/website: www.julietravis.wordpress.com.

Ashley Stokes is the author of Gigantic (Unsung Stories, 2021), The Syllabus of Errors (Unthank Books, 2013) and Voice (TLC Press, 2019), and editor of the Unthology series and The End: Fifteen Endings to Fifteen Paintings (Unthank Books, 2016). His recent short fiction includes “Subtemple” in Black Static; “Fields and Scatter” in Weird Horror; “The Validations” in Nightscript; “Black Slab” in The Ghastling; “Replacement Bus Service” in Out of the Darkness (edited by Dan Coxon, Unsung Stories), and “Fade to Black” in This Is Not a Horror Story (edited by J.D. Keown, Night Terror Novels). Other stories have appeared in Tales from the Shadow Booth Vol. 4, BFS Horizons, Bare Fiction, The Lonely Crowd, the Warwick Review, Storgy and more. He lives in the East of England where he’s a ghost and ghostwriter.

Steve Upham provides the cover art for this issue. He previously published some smashing books as the proprietor of Screaming Dreams, and some great stories as the editor of the Estronomicon ezine. 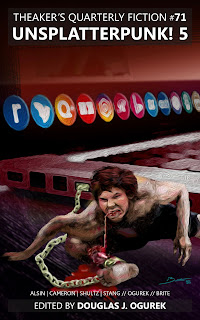 Welcome to the fifth instalment in Theaker’s Quarterly Fiction’s UNSPLATTERPUNK! series. It’s all the blood and guts of splatterpunk plus a positive message.

As you wade through the pierced skin, rotting innards, and soiled undergarments, just remember: there’s more, much more, beneath the blood and viscera. Invest in this volume and maximize your gross profits.

The cover artist is Steven Brite.

Here are the gore-spattered contributors to this issue.

J.N. Cameron has had horror and science fiction stories published in various small presses. He Door Dashes for money and writes for the love of it.

David F. Shultz writes from Toronto, Canada, where he is lead editor at Speculative North magazine. His 80+ published works are featured through publishers such as Augur and Diabolical Plots. Author webpage: www.davidfshultz.com.

Hugh Alsin’s story “Convention Hitler!” appeared in Unsplatterpunk! 2 (TQF63). “A Knock at the Fucking Door” is his second published story. It may well contain more swear words than all 70 previous issues of Theaker's Quarterly Fiction put together.

Douglas J. Ogurek is the pseudonymous and sophomoric founder of the unsplatterpunk subgenre. He edits this book and supplies all of its reviews. His short story collection I Will Change the World… One Intestine at a Time (Plumfukt Press), a juvenile stew of horror and bizarro, aims to make readers lose their lunch while learning a lesson. Publications have rejected Ogurek’s work nearly 2,000 times. However, some of the world’s leading literary journals thanked him for submitting manuscripts in (form) letters. One highly respected publication even said, “We want to thank you for your kindness in letting us see your work.” Thus, Ogurek is a kind author. More at www.douglasjogurek.weebly.com. Twitter: @unsplatter

Steven Brite, the creator of the anthology’s cover art, is a graphic artist, painter, illustrator, and writer. Inspired by a short story idea developed during the COVID lockdown, the artist explored his addiction to social media and discovered visually how extreme the dependency had become. “The internet would not go away,” he said, “so I had to lose a piece of myself to be free. Fortunately, I escaped quickly, and I don’t miss the app(endage)s.” Steven recently finished the first draft of his first novel and is discovering the pains and joys of editing.

Note that we haven't supplied a mobi version for this issue, since they can't be emailed to Kindles any more. But if you still need that format for other devices let us know and we'll put one up.