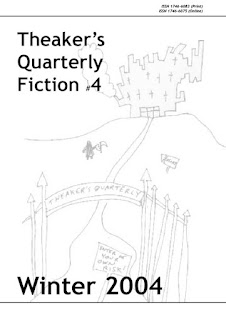 As mentioned in previous editorials, this is our first non-reprint issue, and so you may be surprised by what is on offer. Did you think our writers had stagnated during the long hibernation of the super S.A.B.? More fool you! They are back and firing on all the cylinders they have! Would that they had more, but beggars cannot be choosers, and since I prefer to remain a chooser I chose the stories within, rather than submitting to the humiliation of begging real writers to submit something worthwhile!

I joke, but it is at my own expense – it costs me nothing save dignity, and that is a reasonable price for the entertainment of my readers – since the second story to feature in this issue is my own tale of the Terrible Trio, a set of youthful adventurers whose exuberance, inventiveness and refusal to give up take them from one exciting incident to the next as if they were careering through a child’s waking dreams. Originally intended as an early instalment in a biography of the great hero Rolnikov, Mad Knight of Uttar Pradesh, these tales overspill with such innocent vim and vigour that the rest of his life may well have to wait its turn. Readers are allowed their own opinions, of course, but remember whose name stands guard at the front of the magazine, all too ready to bar entry to those looking to make trouble for my creations! All are welcome within, but doff your hats and scrape your forelocks on the floor.

Our first story is something of a bizarre experiment by Howard Phillips, a man slowly feeling his way back to the light. It is a transcript of a film he made while sleeping. Some may find its unusual style off-putting, but try to make some allowance for the poor man’s state of mind. Once a promising young poet, he has spent more than one year since in the embrace of old father booze, and the stink has not yet faded. With this publication we hope to give him a little encouragement, and if you do not feel he has earned it, remember the times when good turns were done for you, and take pity on a man who can get so much from so little.