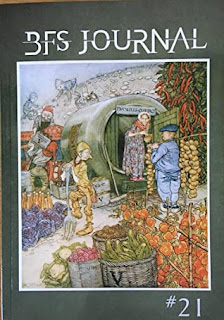 The last issue I reviewed was BFS Journal #18, edited by Allen Stroud (see TQF64). For this issue he moves on to Advisory Editor, while Sean Wilcock takes over as editor. Sarah Deeming is introduced as Reviews Editor, a review section making its welcome return to the publication after an absence of some years.

The first couple of articles are quite hard work. The first tries to persuade us by way of Jungian theory that mazes, water and eating are traditionally feminine. Taking a theory and shoe-horning a few cherry-picked moments from books into it doesn’t tell us anything very much about the books or the usefulness of the theory.

The second, about “Jung’s Concept of the Anima in Fantasy and Science Fiction Pulp”, has a similar problem, and puts forward the nonsensical idea that the UFO craze of the fifties resulted from a Buddhist symbol springing from the “collective unconscious” relating to “the totality of the self”. Hm.

The third article, “When Fantasy Meets Uchronie” by Pascal Lemaire, is genuinely interesting and knowledgeable, telling us about an area of science fiction I knew nothing about: French alternate histories. I’ll be reading some of them in future. It also introduced me to the excellent phrase used for vampire romance in France: bit lit.

The fourth article is a lengthy history of Ladbroke Grove counterculture, taking in people like Pink Floyd, Mick Farren and Michael Moorcock. It’s interesting – I hadn’t known for example how the Notting Hill carnival had begun – but not rigorously academic: many quotations are unsourced, and sometimes even the speaker is unidentified.

Three shorter articles include Allen Ashley’s visit to a witchcraft exhibition at Oxford’s Ashmolean Museum, Jessica Pascoe on a guided tour of Middle-Earth filming locations, and three academics talking about a seminar series on international fantasy at the University of Leeds, and setting out their mission statement.

There are also informative reviews of The Godserfs’ Trilogy, The Girl King and Dragon Heart, all of which make it clear how good (or otherwise) the reviewers thought the books were, which I always appreciate. The issue’s one editorial wobble comes with a review of Kingdom of the Wicked: Rules, which seems to have been published in an early draft.

Otherwise, the egregious errors that plagued #18 have gone, and once you get past the thirty pages of Jungian nonsense at the beginning, there are some good articles with useful knowledge to share. Also, the bibliographies now have the date immediately after the authors’ names, making them much easier to use.

Overall, a good deal of improvement since the last issue reviewed. *** 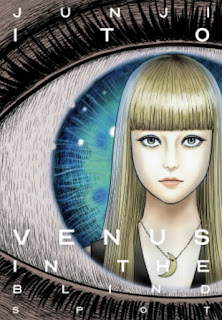 An extraordinarily creepy collection of short stories by writer and artist Junjo Ito, translated by Jocelyne Allen and Yuji Oniki. It presents the reader with one horrifying image after another, while reflecting on themes of loneliness, misogyny and obsession. “Billions Alone”, for example, gives us a world where anyone gathering in a group is mysteriously stitched together, naked, in increasingly bizarre patterns.

Two stories are adapted from the work of Edogawa Ranpo (a Japanese writer whose name is a play on Edgar Allen Poe). “The Human Chair” is the disturbing story of a writer who comes to suspect that there might be a pervert hidden inside her armchair, while “An Unearthly Love” is about a newlywed who discovers her husband has another, less human sweetheart.

The title story, about a beautiful woman who cannot be seen except from a distance, was my least favourite, and the most shocking, for exactly the same reason: the sexual violence at its conclusion is so much more real than the supernatural elements that predominate elsewhere. “The Licking Woman” is the most revolting of the stories: she licks people at night with a grotesque tongue, her spit dooming them to a painful death.

“How Love Came to Professor Kirida” is about a man plagued by the sexual attentions of an obsessive ghost, based upon a story by Robert Hichens. “The Sad Tale of the Principal Post” is about a dad who finds himself in a tight spot, a metaphor perhaps for the pressures faced by an old-fashioned “man of the house”. “Keepsake” is about a baby found in a coffin, nine months after a woman was buried by her adulterous husband.

The endings aren’t always satisfying; in fact, rather than stories, it might be more accurate to think of these as nightmares. They have the logic of dreams, and their vividness. But “Master Umezz and Me” is a change of pace, a memoir of the author’s love of Kazuo Umezz’s comics and cartoons, though even that finds room for a handful of horrific images (Junjo Ito makes his younger self as alarmingly obsessive as any of his characters).

“The Enigma of Amigara Fault” is the story that will stay with me longest: an earthquake leaves people-shaped holes exposed in the side of a mountain, and people are drawn to those holes. Every aspect of this story felt like it had been dragged from my worst fears. I wish I hadn’t looked through it again while writing this review: doing so can only increase the likelihood of having nightmares that draw upon it.

The copyright page offers an alternative title, “Ito Junji Tanpenshu Best of Best”. Although I loved the film Uzumaki, based on his book, I haven’t read his work before, so I can’t say if these truly are the best of his best, as claimed, but given how good these stories are, it would be highly impressive if his other work was even better. **** 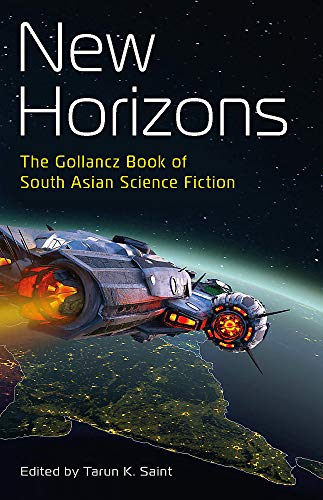 This ambitious anthology collects science fiction from the Indian subcontinent (home to about 1.7 billion people) and from the global diaspora. As well as India, Pakistan and Bangladesh, there are contributors living in Scotland, Iceland and the USA, and the editor himself was born in Kenya. Unsurprisingly, then, it offers a wide variety of stories, presented in what Manjula Padmanabhan’s foreword self-deprecatingly calls ‘a bouquet of styles that are endearingly – perhaps even irritatingly! – local’.

Tarun K. Saint’s highly detailed and informative introduction might be best saved for reading after the stories, but it provides a useful historical overview of the genre in the region, and is likely to send the reader after other books mentioned, such as (for this reviewer) the utterly charming Professor Shonku stories of Satyajit Ray. Saint explains that the genesis of the anthology, as set out in a concept note to potential contributors, was to explore ‘a sense of disturbance with the situation in contemporary South Asia’, and to explore the power of science fiction to ‘generate alternative visions of the future’.

If, as the editor suggests, this aspect of sf has yet to be fully appreciated on the subcontinent, this anthology makes an admirable attempt to redress matters.

There are twenty-three stories, four poems and a prescient series of extracts from a longer work, The Twenty-Second Century by Rahul Sankrityayan, dating from 1923. Six items are translations, twenty-two were written in English. The copyright acknowledgements list only nine, so most would seem to be original to this anthology.

They explore issues such as post-colonialism, religion, colourism, partition (a trauma explored in the editor’s own ‘A Visit to Partition World’), bureaucracy, class, American and British cultural imperialism, sewage management and police corruption (amusingly satirised in Harishankar Parsai’s ‘Inspector Matadeen on the Moon’). They don’t on the whole go very far into the future, and rarely visit space, tending to explore a recognisable world.

The mistreatment of women is a frequent theme. ‘A Night with the Joking Clown’ explores the effects of Male Hypertoxic Syndrome and extrapolates the exploitation of women to its ultimate end. Giti Chandra’s ‘The Goddess Project’ imagines android goddesses created (or perhaps summoned) to fight back against such oppression. In ‘We Were Never Here’ by Nur Nasreen Ibrahim the women just up and leave (although the only sf element of that one seems to be that it posits ninth and tenth waves of future feminism, without explaining what they are).

Despite the serious intent, it’s far from a humourless book. ‘The Man Who Turned into Gandhi’ by Shovon Chowdhury is the quirky story of a chap who loses his hair and teeth, becomes ambidextrous and can no longer eat chicken or wear clothes. Transformed into Gandhi, he finds out how the hero of the independence movement might be treated if he reappeared now, and delivers lengthy lectures to his wife. ‘You used to talk very little,’ she says. ‘It was one of your few good points.’

‘Dreaming of the Cool Green River’ by Priya Sarukkai Chabria is another satire, and a highlight of the book, introducing us to the Chief Sanitizing Archivist, who in theory collects Objectionable Art and Ideas so as not to offend HurtMobs, but in fact is creating copies so that she can sell the originals.

The New Horizons bit of the title has been added for UK publication, perhaps to stress that these are mostly new stories. For me it was almost all new horizons: the only name I recognised was Vandana Singh, who contributes the flowery final story, ‘Reunion’. I must have missed Anil Menon back in Interzone #216, but his story here is a good one: ‘Shit Flower’ concerns a ‘computational immunologist’ who taught sewage control computers to understand jokes as a security precaution. Surprisingly moving, given its faecal subject matter.

That the anthology was originally produced for an Indian audience is perhaps reflected in the absence of a glossary for untranslated words and phrases. This can be a bit frustrating when they are crucial to understanding the story, but Google was usually able to help.

New Horizons is an entertaining book that offers a generous selection of locations, viewpoints, issues and styles. Don’t expect the censorship of Bollywood films: these address adult themes in an adult world. It does a lot of different things and it tends to do them very well; this review could only fail to encompass them all. This anthology feels like a labour of love, and with respect to Manjula Padmanabhan, readers should find it stimulating rather than at all irritating.

Note that this review was written in January 2020, based on an advance review copy, and originally appeared in Interzone #286. The book's UK publication was then postponed to 2021. Any changes made to the book during the intervening time won't be reflected in the review.

Tomorrow, When I Was Young, by Julie Travis (Eibonvale Press) | review by Stephen Theaker 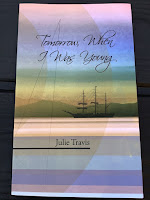 I’m often a bit nervous to read books by writers I know, because no matter much I like them, I’m still going to rate their books honestly. I needn’t have worried: this chapbook was terrific. Zanders, a woman who in the present was suffering from the physical injuries left by domestic abuse, has now awoken in the past, on a ship called The Giantess, with the mysterious and rather romantic figure of The Golden Sea Captain, and gains a kind of peace through adventure. Highly recommended. Stephen Theaker ****
Posted by Stephen Theaker No comments: