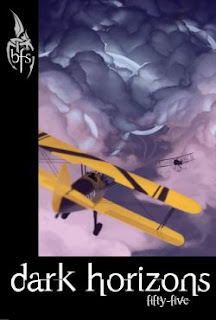 Twelve short stories, from blood-soaked battlefields to drowning futures! Three articles, on the most beloved of writers and the utterly unknown! Twelve poems! Seven contributing artists! One hundred and sixty exciting pages! Seventy thousand thrilling words! Yes, the editor got a bit carried away when putting together Dark Horizons 55… but it looks like it’s turned out all right in the end. His wife is still speaking to him (just) and the issue has gone to the printers, wrapped in its marvellous cover by Arthur Wang, to be despatched with the British Fantasy Society's September mailing.