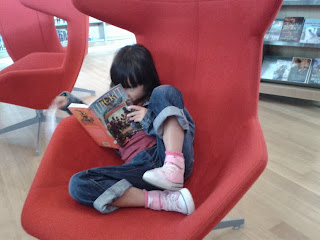 Thought 1. I took our children to see the new Library of Birmingham at the weekend. I’ve got mixed feelings about it. It’s a good-looking building, inside and out, though one can’t help imagining what it might start to look like once the cost of keeping it looking so nice kicks in. It feels rather like a London building that has teleported to Birmingham. It’s odd to walk into a library and not know where to find the books. The open plan means it’s quite noisy, more like visiting a popular museum than a library. One fluff is a row of spinning red reading chairs lined up along a long desk, even though the desk is impossible to reach when sitting in those seats. I hated those chairs at first, but sitting in them later completely converted me, and now I want one for my office. I got the children to crawl underneath looking for a manufacturer’s name, but they let me down. So if anyone can point me in the right direction, please do!
The library does have plenty of nice places to just sit and read, and I could quite easily see myself popping down there to get some reading done. It doesn’t feel like there are any more books than in the old library: see my photo below of the woefully understocked (or perhaps just extremely popular) horror section. The new children’s section is nice, but out of the way, and the circular desk surrounding the staff discourages queuing, which encourages squabbling and irritation. The series of huge steps at the back will be brilliant for storytimes, though I overheard the staff saying they were too busy to actually have any, and its large rectangular plastic cushions were being thrown around and used to construct forts and rafts rather than sat on. It’s exciting to see the range of cultural activities planned for the library overall, and I hope that doesn’t stop once the launch period is over. 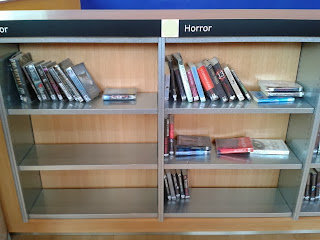 Thought 2. My post offering authors a few points to consider before getting stuck in over a review has been pushing up our page views like no one’s business, and a writer turned up in the comments who had done just that, with us, a couple of years ago. I took the opportunity to interview him about his reasons for doing so, and I think the answers give a useful insight into the way some authors persuade themselves that this really is the right thing to do. The conversation left me with the feeling that there’s little point advising anyone not to attack a review. If they want to, they will, they’ll draw a line wherever it needs to be to put the review on the wrong side of it. And people who aren’t inclined to get huffy about reviews will nod at the advice and just do what they would have done anyway. Can I really claim my self-control is any better on this issue when I’ve never been confronted by a review with which I really wanted to disagree? (Well, apart from this, arguably, but I’d suggest that doesn’t count as a review.) I’ve had pretty bad reviews, for example a two-star one in SFX of my second self-published novel (here it is), but I can hardly say, look, I didn’t start an argument with the reviewer, because I didn’t want to argue with him. In fact, I thought the review was spot on, and if anything much kinder than the book deserved!

Thought 3. Goodreads have tightened up their rules on certain matters, in particular prohibiting the battle-shelving of books, making quite a few people really unhappy. For example, if an author has done something to earn the opprobrium of militant readers, they might till now have found their books added to shelves like “not-in-this-lifetime” or “author-to-avoid”. You might expect me to be against Goodreads on this change, but I do get it. For one thing, leaving stuff like that up could get them into legal trouble. For another, the people using those battle-shelves were almost always people who hadn’t read the books and who had no intention of reading them. So visiting a book written by a dodgy author you’d see little about the book itself, but dozens of comments about the author, and that was unfair to the books. Even complete gits can write good books.
I have more sympathy for people told by email that loads of their reviews had been deleted as part of the site’s purge of this kind of thing, but anyone who has been on Goodreads for more than five minutes should know that such things are a fact of life there. Rogue librarians wrongly deleting or merging books, questions over whether single issues of comics and magazines should be included in the database (you could easily write a review of something only for the item to then be deleted), the sudden withdrawal of Amazon’s metadata at one point: this stuff happens all the time, and if that’s the only place you’re putting your reviews (no for me) or tracking your reading (yes for me) you’ve got to regularly download a spreadsheet of your booklist or risk losing it. Click on Export to a CSV file on this page.

Thought 4. “And f— you again, Aaron Sorkin, for hiring Constance Zimmer, Olivia Munn, Kelen Coleman, Natalie Morales, Alison Pill, Chasty Ballesteros, Hope Davis and Margaret Judson and leaving their fucking clothes on.” Ugh. It is 2013, right? Between that and this, I’m done with AICN. Looking forward to watching The Newsroom, though, which just arrived from Lovefilm.
Posted by Stephen Theaker