Pilgrims at the White Horizon: launching on Friday at 7.00 pm, Wolverhampton 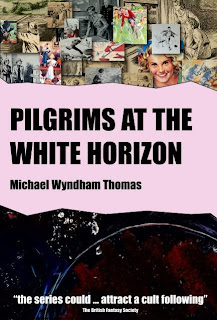 In 2009 we published a novel by Michael Wyndham Thomas, The Mercury Annual. That was a mistake. I love the book and I’m glad it’s been published, but it deserved a better publisher than me, one dedicated to publishing books and bringing them to readers’ attention rather than squeezing them in around a quarterly magazine! I haven’t made time to do any of the books I’ve published by other people any justice.

However, undeterred by my rubbishness Michael Thomas came back to us with the follow-up, and after a dilatory gestation period Pilgrims at the White Horizon will finally be launched this Friday, at 7.00 pm, at the Light House in Wolverhampton.

In this volume Keith is dragged off to Valiant Razalia, a far-off world hardly anyone remembers – because it only ever appeared in one panel of one comic strip in one British annual! – by bizarre alien beings who think he’s their creator and want him to finish the job. Along for the ride is Keith’s daughter, for whom it’s at least a break from her studies.

This will probably be the last book I publish for a while by anyone but me and John (unless I decide to give book publishing something more than a half-hearted go). I’ve taken an absolute age to get it ready for publication and I feel terrible about that. But it’s worth the wait. If you can’t make it to the Light House, watch out for it on Amazon this weekend.

For more information about the author see: http://www.michaelwthomas.co.uk/
Posted by Stephen Theaker