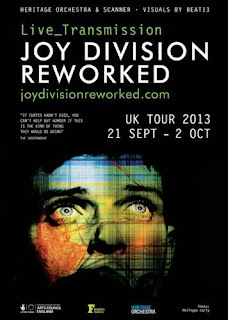 The publicity material for Live_Transmission: Joy Division Reworked (The Symphony Hall, Birmingham, 28 September 2013), performed by Scanner and The Heritage Orchestra, made it clear that one should not expect a Joy Division covers band, a niche well served already by Peter Hook and the Light. However, what it did not make clear was that these were not, on the whole, Joy Division songs at all, but rather entirely new pieces vaguely inspired by Joy Division songs. From time to time the slightly repetitive short films by Matt Watkins that illustrated the performance (for example by moving through cross-sections of the human body or showing space invaders fighting over the pattern from the Unknown Pleasures cover) would display snatches of lyrics, which was fortunate because otherwise listeners would rarely have had any idea which songs were theoretically being reworked.

But it began quite promisingly, with a building swell of white noise and light that burst at last into a thudding, percussive take on “Transmission”, the bassline and drums used to drive a Krautrockish instrumental version. But it went on a bit too long, and there was (as the case for most of the concert) no sign of anyone singing the song. A few snatched samples were pretty much all we got in that line, aside from a closing performance of “Love Will Tear Us Apart” (over apparently random orchestral playing) that left you wishing for Paul Young. Unfortunately that take on “Transmission” was the concert’s high point for me, as from then on the Joy Division elements of the performance became ever harder to discern.

Other songs performed included (I think), “She’s Lost Control”, “Isolation” and “Dead Souls”, but billing the concert as Kraftwerk, Bowie or Hans Zimmer Reworked would have been almost equally plausible, given the scarcity of obvious links to the originals. Since watching the concert I’ve read interviews with those involved, who stressed their desire to avoid being a “crass tribute act”, and that’s a reasonable goal, and I’m sure there are subtle connections to the original songs that were difficult to spot on a first listen, but it’s being sold as Joy Division Reworked, not as original avant garde pieces. I did try to take it on its own terms, but as avant garde music it felt uninspired and unchallenging, putting me in mind of nothing so much as the ambient remixes of Moby’s cover versions played loudly.

More positively, the players were well-rehearsed, the performance going without any apparent hitches, and it was all appropriately moody and atmospheric (so dark in fact that we could rarely see the performers from our position). There have been tweets from other attendees who thought it was wonderful, though in some cases even they note the high numbers of people dashing off to the bar. If these compositions are released as an album, I’ll probably grow to like it. Perhaps if I’d had a chance to get to know the music first, or if I’d been able to see what the musicians were doing, I might have enjoyed the performance more. Even now, though I remember being unimpressed and rather bored during the concert, there’s a part of me thinking, Joy Division songs, ripped up, remixed and played by an orchestra in the Symphony Hall: that sounds great. So why was it so dull?

The show is on tour for a few more days and you may like it much more than I did. Further dates here.
Posted by Stephen Theaker