Finches of Mars by Brian Aldiss, reviewed by Stephen Theaker 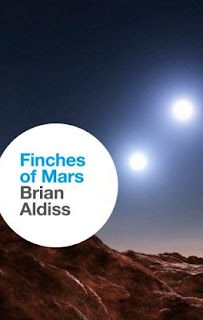 Finches of Mars by Brian Aldiss (The Friday Project, epub, 2782ll; reviewed from Netgalley epub) is a dry report, in thirty-four short chapters with footnotes and an appendix, on the colonisation of our neighbour following the discovery of water in a great underground lake. Inspired by Herbert Amin Saud Mangalian’s argument that “humanity on Earth was doomed, and that the only solution was to send our best away, where they could strive – on Mars and beyond – to achieve true civilization”, the universities of the world collaborate first in sending two hydrologists, and then in building, maintaining and populating six towers, close enough to each other to avoid isolation, but distant enough to maintain independence. Each tower gathers speakers of one language family, to promote harmony. For similar reasons a decision is taken to allow no religious people on Mars. While problems back on Earth multiply and worsen, the colonists face their own troubles, most particularly the difficulty of bearing children on Mars. We learn most about the West tower, and its friendly relationship with the Chinese tower, friendly at least until door guardian Phipp shakes a member of the Chinese delegation by the throat. Phipp is Sheea’s partner but not the father of her baby, the first to survive childbirth, and takes offence at being congratulated.

The main theme, I think (as indicated by its title), is an examination of how living on another world – “a steady environmental change” – would affect humans, both in terms of the physical changes caused by a different gravity, and in how it might “act like a switch on our consciousness and our extended consciousness”. Colonising other worlds, it suggests, is not just a matter of building domes and oxygen pumps, but also of accepting the influence of new evolutionary pressures. As far as Earth goes, this book presents a worst case scenario, and through Mangalian (who has the last word, the appendix a summary of his influential book) argues that the worst case is inevitable. The recommendation is to spread our bets and keep our expectations low. As long as we rely on this one planet to keep the human race alive, and as long as we keep doing our best to muck it up, we’re on a knife edge, a few bad decisions (like that of Phipps, say) away from becoming a footnote in geological history.

The book is rather angry and pitiless in its dissection of humanity. Noel, the colony’s leader, may ultimately declare that “We are the great resource”, but the book doesn’t seem to particularly care whether we survive, wondering through Mangalian whether “this creature who has unsparingly overrun the planet deserves its self-inflicted misery”. Leaving the zealots behind on Earth seems like a good idea, especially when colonists returning to Earth face threats from suicide bombers, angry at their attempts to escape from God’s sight. But when hope seems to fade on Mars, with devastating consequences for the hope of all humankind, there’s a sense that perhaps some irrational faith in the future, for all its foolishness, might have been helpful: “Hope was such a hateful weakness. It sang out, sprang out, when least expected.”

The meticulous examination of such themes makes for a talky, thinky and theatrical novel, with figures moving on and off stage to say their significant words and think their significant thoughts – and I liked that about it. A Hollywood blockbuster version of exactly the same story can be imagined (and of course it would give away all the twists in the trailer), but this isn’t it. Finches of Mars will apparently be the last science fiction novel from Brian Aldiss, which is a great shame since this fascinating, provocative book, so dense with thoughts and speculations that a review can only draw out a handful of threads, is certainly not the work of an author in decline. If this had been his first book, one would eagerly anticipate the second.
Posted by Stephen Theaker