Lone Wolf 30: Dead in the Deep | review by Rafe McGregor 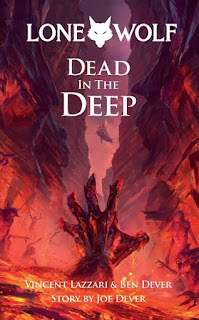 Given the many trials and tribulations experienced by Joe Dever in securing a reliable publisher for the New Order series (21 onwards) of his Lone Wolf gamebooks from the mid-nineties, my main concerns whenever a new book is released are whether I will receive it and what kind of production values it will have. The details of the first two decades of Joe’s struggle can be found in my review of Lone Wolf 21: TheVoyage of the Moonstone and the last two years in my review of Lone Wolf 29: The Storms of Chai. While I was writing the latter in November 2016, the series and its considerable fan base suffered the ultimate setback in Joe’s untimely death and it seemed like his Holmgard Press would close after less than a year in operation. The press has, however, been relaunched at www.magnamund.com and appears to be run by his son, Ben, who is jointly responsible for the completion of the series (books 30 to 32) with Vincent Lazzari. The ordering process from the website is simple with safe if not speedy delivery following. Dead in the Deep is a hefty tome (there are no page numbers in consequence of the sections used for gameplay, but it is over two inches thick) and although the paper used is of lower quality than the Collector’s Editions published by Mongoose and Mantikore, the finished product makes for a neat fit with the rest. In keeping with almost all of the series to date, Dead in the Keep consists of three hundred and fifty sections and you can perhaps imagine my disappointment when I discovered sections 319 to 330 were absent from my copy, a repeat of sections 233 to 251 appearing in their place. I contacted Holmgard about the problem and received a very quick response to the effect that a replacement would be sent to me without any extra charge or a requirement to return the defective copy (I always resent either of these inconveniences if the fault lies with the publisher or the supplier). I received the replacement in due course and I only relate the complication as evidence of why I am confident in recommending Holmgard Press to any and all potential readers. At present, they also offer the Collector’s Edition of Lone Wolf 23: Mydnight’s Hero (£16.99) and twenty-five very attractive art prints that look like alternative book covers. The Collector’s Edition of Lone Wolf 24: Rune War (also £16.99) is the next book due for release (no date given).

I mentioned my intense emotional (and, once or twice, extravagant financial) investment in the franchise in previous reviews and this investment is at its greatest now when it looks like the cycle, which Joe originally envisaged as consisting of thirty-two books, might actually be completed. I reproduce the first two paragraphs of Ben’s short foreword here:


Two weeks before my dad passed away he asked Vincent and myself to complete the Lone Wolf series. It’s a huge honour to finally be able to share with you the first part of the epic conclusion to his unique saga.


A life’s work underpins this book, and the details of the story were dictated in the palliative care ward at Whipps Cross Hospital. And so, although the first draft was produced by Vincent, and the final draft by myself, we both feel that this book is as much a creation of my dad’s imagination as any other Lone Wolf story. This is his book.

Bearing in mind the outstanding calibre of The Storms of Chai (which really was worth the seventeen year wait), the stakes for someone who has followed the series for as long as I have, and such a touching and tasteful tribute from Ben, it is very difficult to approach this gamebook with any kind of critical objectivity. So, let me cut to the chase… in summary, Dead in the Deep does not live up to the promise of its prequel. I saw my options as to either explain my evaluation in a mixed review or to stop reviewing the cycle. I decided on the latter for the Autumn Snow series following my for the most part negative review of Autumn Snow 2: TheWildlands Hunt last year. Obviously, I decided on the former for the Lone Wolf series – on the basis that, with only two books left to go, I shall buy and play them no matter what and because while Lone Wolf is partly for lifelong enthusiasts like me, it is also for a younger generation of players who deserve an honest review.

The Storms of Chai began in the early spring of MS 5102, seventeen years after the conclusion of Lone Wolf 28: The Hunger of Sejanoz, with Lone Wolf holding a council in which he revealed that Magnamund was under a coordinated attack by an unknown force. There were six armies attacking six different locations and the six Kai Grand Masters were despatched accordingly. Mine, True Friend (whose deadly Kai powers are only exceeded by the silliness of his randomly-generated Kai name), proceeded to the remote Bhanarian city of Bakhasa with the intention of recovering the new Claw of Naar before the Nadziranim sorcerer Zashnor could use it to create a weapon of mass destruction. There was a real sense of urgency in The Storms of Chai, the feeling that the Kai were fighting to save the whole of Magnamund rather than just Sommerlund (as was the case in the consecutive Kai and Magnakai series, books 1 to 12). This urgency and import created the expectation of a rapidly-paced push to the conclusion of the whole cycle in the last four books and the expectation was exceeded to the extent that my only criticism of The Storms of Chai was that it took several attempts before True Friend survived to the very end.

The first indication that Dead in the Deep will not continue to meet these expectations is in “The Story So Far...” section, which is quite simply not as well-written as in previous books. This is not a major flaw in a gamebook aimed at a young adult audience, but it makes for a disappointing beginning.  Lone Wolf’s Grand Masters have been reduced in number from six to three (including True Friend) and the survivors are all sent on missions whose goals are deliberately withheld from one another. True Friend is despatched on a rescue mission, to find missing Grand Master Steel Hand. Unfortunately, this plot has already been used thrice in the cycle (in Lone Wolf 14: The Captives of Kaag, the graphic novel The Skull of Agarash, and Lone Wolf 25: Trail of the Wolf) and takes him to the Maakengorge, a location that has already been used twice (in Lone Wolf 4: The Chasm of Doom and Lone Wolf 16: The Legacy of Vashna). The combination of these factors put me in a pessimistic mood for play, pre-primed for sensitivity to a lowering of quality and lack of originality. My pessimism was exacerbated by the fact that the adventure has a slow start, with very little action and a largely linear narrative.

Dead in the Deep nonetheless grows on one as the game becomes progressively more exciting and challenging. As such, it is very much a narrative of three parts. The first, which is slow in comparison to The Storms of Chai, involves the journey to Emolryia. The second involves the exploration of Emolryia, the Hidden Citadel, the Maakengorge, the Lake of Blood, the Underworld, and the Chaos Prison. As soon as True Friend descended beneath the lake to the Underworld, I felt I was back in the midst of the an original, complex, tense, and exciting game that might reach at least some of the promise of The Storms of Chai. The third and final part involves the escape from Emolryia, which returns to the frenetic pace of its predecessor and has obviously been crafted with great style and skill. In this part the pace literally never lets up, continuing right to the final section of the adventure. Dead in the Deep cannot compare to The Storms of Chai, but in retrospect it is entertaining, satisfying, and well worth the cost in both money and time when judged on its own merits.

Regarding gameplay as opposed to the literary or narrative elements of the volume, Dead in the Deep is much easier to survive than The Storms of Chai, with combat less frequent and for the most part less challenging. There are nonetheless several other ways to fail the mission – too many, in my opinion. Where a tedious opening can be forgiven and forgotten in the heat of a climactic dénouement and resolution, gameplay problems are of greater concern. With the gaming pleasure of future players in mind, I thus offer the following advice:


1.      You cannot gain access to the Hidden Citadel without an Amulet of Fealty, but by the time you arrive in Emolryia it is too late to secure one.


3.      You must give Steel Hand your Nyaxator armour when presented with the opportunity to do so.


4.      The New Order Kai Grand Master Disciplines of Assimilation and Kai-Alchemy are very important for successful completion of the mission.

I noted my reservations about writing this review above and I hope that neither Ben nor Vincent will feel that my criticisms have been unfair should they read it. No, Dead in the Deep is not nearly as good as The Storms of Chai, but when one considers the tragic circumstances of its conception and publication, it is a truly remarkable achievement by the two authors.

As with all the other Collector’s Editions, there is a bonus adventure, “Kaum Before the Storm”, written by Vincent and long-time Lone Wolf collaborator August Hahn. I was hoping that the supplement would pick up where the previous bonus adventure left off, with Lord Elkamo Doko, a Vakeros warrior-mage, but the player adopts a new persona here, that of Kai Grand Master Blazer. I cannot comment on the game as the publication of Dead in the Deep found me in the middle of my first house move in nearly fifteen years and I only had time to play the main game before bubble-wrapping the book. The penultimate adventure in the cycle is Lone Wolf 31: The Dusk of the Eternal Night, which will be published by Holmgard, but for which no publication date has yet been announced. With Ben and Vincent at the helm, I’m cautiously optimistic that True Friend’s next mission won’t be too long in coming. In the meantime, my next mission is to work out which box I put Dead in the Deep in…
Posted by Rafe McGregor