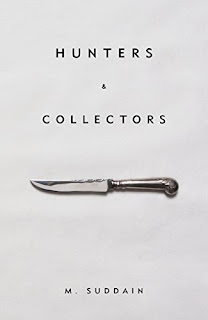 The mother of Jonathan Tamberlain threatened to kill him if he ever squandered his gifts on criticism, and she wasn't just speaking metaphorically, he tells us, she told him exactly how she would do it. She was an art collector, his father a poet; the two of them met at a boxing match. Sparring with his father left Tamberlain in a coma, and he woke up with an amazing nose, one that can catch the scent of a wine from half a mile away.

So he did exactly what his mother didn't want: he became a food critic, though that's not what he calls himself. He follows the example of his hero, Eliö Lebaubátain, in claiming the title of "forensic gastronomer". It's not entirely clear why, since there's no legal aspect to his work – or at least there wouldn't be, if he didn't always get himself into so much trouble.

The book (Jonathan Cape pb, 506pp, £14.99) begins with snatches of writing from and about his early career, showing his rise to fame, but by the time the narrative settles down to its main adventure, he's had the time to develop a long and intense relationship with his bodyguard, the marvellously formidable Gladys. To her he's "like a grandpa you spend time with out of guilt", and for him she's like the annoying cousin your family takes on day trips, but they share an utter dedication to their respective jobs that is one of the novel's most interesting features.

Unfortunately, Gladys wasn't there the day he went to the Fair.

While Tamberlain grew up in the Western Hemisphere with a pair of liberal parents, the Eastern Hemisphere lived under the absolute control of Vlada Yinknokov, the Great Butcher. She had a billion people murdered during her revolution, including thousands of architects and doctors. She outlawed hospitals, declaring that from then on diseases would be cured by the will of the people. And she came to the Fair too.

Tamberlain only attended to make amends to an old friend. In that he failed miserably, and after a contretemps involving a bomb threat he didn't mean to make he was taken away to the Great Butcher's yacht, waking up to find a gas mask on his face and everyone including the dictator dead, following a nerve gas attack. Arrested and taken to the Eastern Hemisphere for interrogation, he fell into another coma, and it's when he wakes up that the story proper begins.

Dr Rubin Difflaydermaus is a batty psychiatrist with a habit of showing up in Tamberlain's head. He also has his book (Infinity Remastered: Engineering the Post-Human Species (and Why Our Great-Grandchildren Might Not Even Need Bodies)) delivered wherever Tamberlain is sleeping. The copy waiting after the critic's latest coma contains a clue: a laundry ticket from the legendary Hotel Grand Skies.

Tamberlain has long dreamt of eating at its famous restaurant, the Undersea. Nothing will stop him getting to the hotel, and once he gets there, nothing will stop him eating that meal. He'll literally wade through blood to get it, and he'll need to, because the staff have completely lost their minds and every interaction brings with it the threat of ultraviolence. Ace literary agent Daniel Woodbine and bodyguard Gladys will do their best to keep him alive as the severed heads pile up, but he won't make it easy for them.

Hunters & Collectors is quite reminiscent of Transmetropolitan, by Warren Ellis and Darick Robertson, and may appeal to the same people. Instead of political writer Spider Jerusalem and his filthy assistants we have here a food critic, but he adopts a similarly misanthropic worldview ("To me the greatest possible horror is not that humanity might end, but that our Empire of Stupidity might last forever") to protect a heart similarly sensitive to the horrors of his world. Like that comic, this is not an entirely serious book, but it does have moments that are truly shocking, and others that feel surprisingly sincere.

The sf ideas at its heart, on the other hand, may not come as great surprises, at least not to people who have a holodeck episode of Star Trek: The Next Generation, but the book is after all being sold as modern contemporary fiction rather than sf, and it uses its rusty tools to tell quite a sharp story. Equally, what seems at first to be quite an experimental novel, beginning with a hundred-page flutter of notes, letters, fragments and diagrams, settles down after that to provide quite a conventional first-person narrative that nevertheless does the job.

That's the book in a nutshell: a bit less ambitious than it looks, but still quite good, and rather well executed. Just like the guests at the Hotel Grand Skies. ***