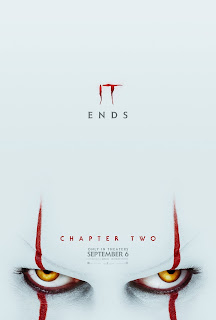 Blockbuster horror soars when it clowns around, stumbles when it gets serious

Any horror aficionado worth his salt will scoff at a horror film that shows adults holding hands and chanting or, even worse, partaking in a group hug… unless, of course, those things are meant to be humorous. Unfortunately, both handholding and a group hug appear in It Chapter Two (directed by Andy Muschietti), and it’s this reviewer’s opinion that neither of them is meant to be funny. These two more glaring horror faux pas encapsulate the key shortcoming of the film: sacrificing silliness, the film’s strength, for touchy-feely posturing.

Twenty-seven years have passed since Pennywise the Dancing Clown (aka It) wreaked havoc on a group of friends in Stephen King’s fictitious town of Derry, Maine. Now they’ve gone their separate ways and become successful adults. Mike Hanlon (Isaiah Mustafa), the only one who has remained in Derry, convinces the others to return and defeat Pennywise – they did, after all, make a blood pact when they were kids.

On the positive side, It Chapter Two retains and intensifies one of the first film’s greatest assets: creepy, yet funny manifestations of Pennywise. This time around, the viewer gets treated to a large statue that comes to life, a crazed fiend that makes fun of one character’s sappy poem, a bodiless pair of legs, and much more.

Alas, the film takes a nosedive when the friends revisit a setting from the first film in a climactic scene that goes on for far too long. There is a shift from playfulness to melodrama. A voice-over offers a message about friendship. First, these “friends” haven’t seen each other in 27 years, so how close can they be? Second, this is a film about a supernatural clown. Let’s not get too deep.

The film’s saving grace is Pennywise (Bill Skarsgård). The monster has a complete lack of compassion for characters who are discriminated against or bullied. As in the first film, the best scene involves Pennywise manipulating an unsuspecting child. This time, it’s underneath the bleachers at a baseball game. However, It Chapter Two eventually squanders Skarsgård’s acting talents by heaping special effects upon the clown.

I didn’t go to see It Chapter Two to get some grand gesture about friendship among a group of “losers”; I went to see Pennywise’s antics. I got a healthy dose of the latter, but the former got shoved down my throat.—Douglas J. Ogurek ***

Read Douglas’s review of It.
Posted by Douglas J. Ogurek