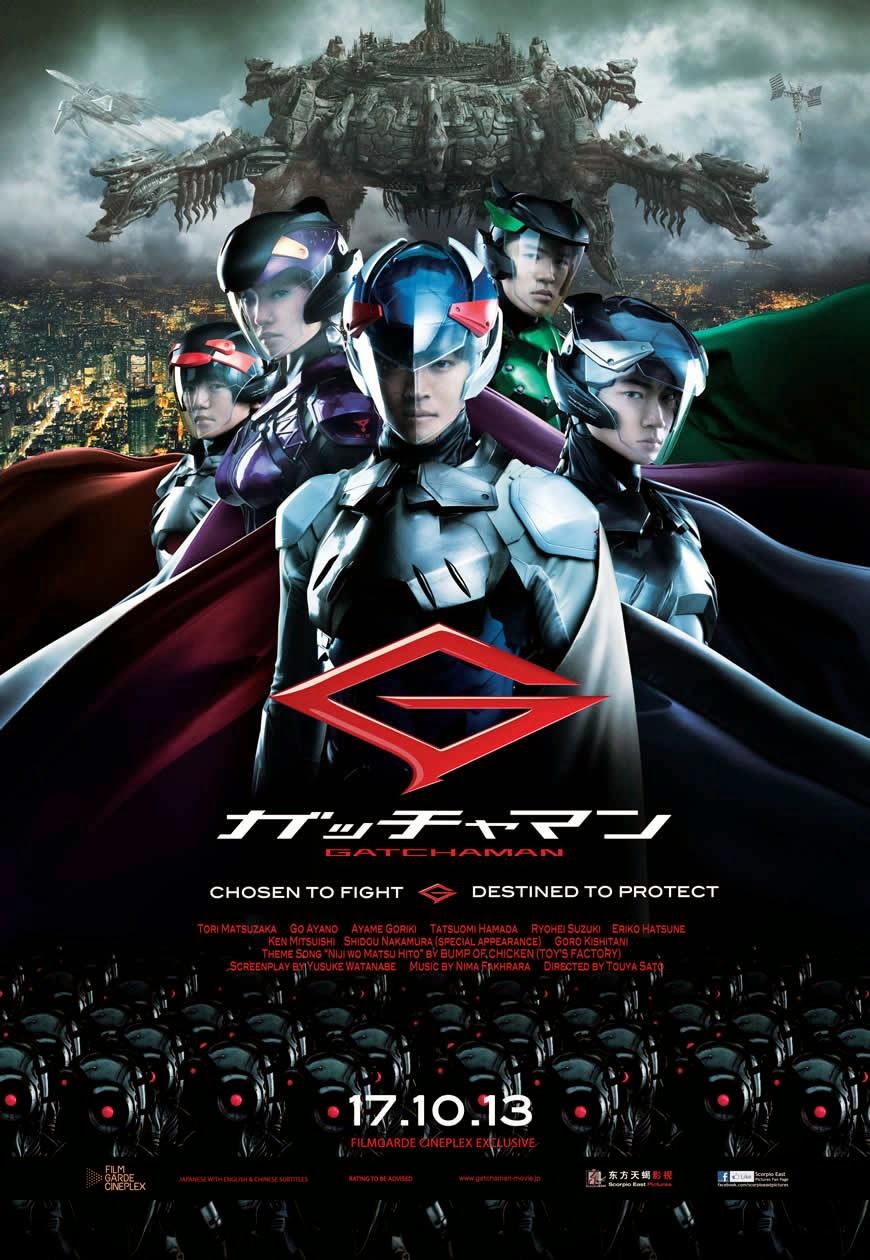 The tokenism of casting a bat (and batted eyelids) amongst the pigeons.

Anime pioneer Tatsuo Yoshida’s Science Ninja Team Gatchaman has gone through several permutations since the seminal television series of 1972, perhaps foremost of which is the fondly remembered English-language adaptation Battle of the Planets (1978). Gatchaman / Battle of the Planets centres around five orphans – Ken (Mark), Jun (Princess), Ryū (Tiny), Jinpei (Keyop) and Jō (Jason) – whose bird-themed ninja superpowers and techno-wizardry enable them to stand against the evil forces of Galactor (Spectra). Imagi Animation Studios (which released Astro Boy in 2009) began work on a Gatchaman feature film in 2004, but the project stalled, languished and eventually was cancelled in 2011. Gatchaman then rose again as a live action movie directed by Toya Sato and released by Nikkatsu Studios in 2013.

Back in 1978, cuts and voiceovers were used to make the American-tailored Battle of the Planets more children-orientated than the original serial, the main differences being less violence, fewer human casualties, no references to transgenderism, and the rather upbeat replacement of environmentally conscienceless corporate villains with a more SF-generic alien foe. Thirty-five years on, the live action incarnation of Gatchaman serves as something of a prequel, not only restoring much of what was lost to English translation (Berg Katse’s hermaphroditic shifts, for instance) but also fleshing out the backstory of Ken and Jō’s strained relationship. Oddly enough, given that Battle of the Planets twisted its reworking partly so as to cash in on the Star Wars phenomenon of the late 1970s, Gatchaman also now genuflects to George Lucas, postulating a yin-yang relationship between Galactor’s and Ninja Team Gatchaman’s powers, and even culminating in a fluorescent pastiche of the lightsaber duel from The Empire Strikes Back. Notwithstanding such concessions, much of Yoshida’s founding premise remains, albeit somewhat revamped and elevated to the brash absurdities of the big screen.

The Japanese film industry has a special term – tokusatsu – for works that make extensive use of special effects. Cultural nuance renders the word closer to Hollywood’s blockbuster than to the more British utter codswallop, but anyone who’s seen Man of Steel (2013) will doubtless have suffered through the gist. Clocking in at 110 minutes, Gatchaman has more than enough bouncing-off-buildings and faster-than-the-eye-can-follow fight sequences to tick off those viewers who weigh their lives by number of hours invested and pointlessly lost; yet, such is the speed disparity between the movie’s live action and animated sequences, that the blur becomes at times quaintly cartoonish, as if the feature film format were being used not to break but rather to recreate the constraints of its forerunner. Harking back to and elevating the action components of 1972’s Science Ninja Team Gatchaman may seem at once questionable yet strangely in keeping with the cinematic zeitgeist of the 21st century, but then again there can be little doubt that 2013’s Gatchaman has been realised at least in part as a new-age kitsch homage.

Certainly, this is the case when we see the prototype Phoenix (G-Force’s distinctive supersonic plane) launch belatedly upon its maiden flight, and then again when it turns fiery, the dramatic pre-eminence of these events clearly playing more to notions of audience nostalgia than to their function within the film. As per the television series, music is employed to rousing effect in underscoring such iconic themes, but Toya Sato and writer Yusuke Watanabe also use it to cheat their way out of attention to scripting, manipulating the audience so as to cover up (or indeed barefacedly create drama from) some conspicuously nude plot points. One brazen example of this is when Ken and Jun must infiltrate a high-security masquerade, Jinpei scrambling desperately to hack the computers and establish forged identities before they reach the checkpoint. It’s undeniably a tense moment, but of course the timing is arbitrary and there was no reason for them to line up before Jinpei had finished his work. The sense of peril is entirely manufactured.

Although its plot is loose, its action cartoon-chaotic and its themes as vague as they are epic, Gatchaman 2013 does in one respect meaningfully elevate itself above the franchise’s small-screen origins of forty years previous. Live action affords, if nothing else, the potential for stronger characterisation, and in the persons of Ken (Tori Matsuzaka) and Jō (Gō Ayano) – and to a lesser extent Ryū (Ryohei Suzuki) and Naomi/Berg Katse (Eriko Hatsune) – that opportunity has been capably seized. Matsuzaka has a real presence. Ayano positively smoulders. Whenever there is (inter)acting to do, rather than racing all about the place, fatuously martial-fartsing, we are given at last a fully rounded sense of what those teeth-grinding, angst-ridden expressions were all about back in the days of hand-drawn emotions. Watanabe’s script, in truth, gives the actors precious little to work with, but Matsuzaka and Ayano nevertheless put in performances well worthy of both 1970s Gatchaman and the dark superhero genre’s broader swathe. It’s just unfortunate that Toya Sato’s modernisation – to give a western comparison – proves rather closer to Michael Bay’s oeuvre of filmmaking than to Christopher Nolan’s.

Possibly the most damning evidence of Gatchaman’s failure to better itself for the big screen and the new millennium, is the mind-blowingly vapid characterisation of Jun (Ayame Gouriki). Granted, the animated Jun/Princess was never much more than a wet handkerchief with which to dab the perspiring foreheads of the male leads, but the Jun of 2013, far from correcting this imbalance, has fallen into a condescension machine and emerged, wide-eyed and pouting, as a perverse archetype of bland, tittering, puerile, hormonal brainlessness. Jinpei (Tatsuomi Hamada) may be the least developed of Ninja Team Gatchaman’s quintet, but whereas he is merely neglected by Sato and Watanabe, Jun has been actively depicted (objectified? fantasised?) as recycled plastic. She is to female dignity and empowerment what Elmo has been to the Muppets, which is more than just a shame; it’s out-and-out shameful.

One advance trailer for the curtailed Imagi Animation production of Gatchaman shows Ken, Jun, Ryū, Jinpei and Jō leaping from a skyscraper and swooping down towards an insectoid death mecha, Jun’s inane little giggle jarring badly with the urgent musical score and the more determined exertions of her fellow ninjas. In another piece of test footage she winches (wenches?) up through a scene of explosions and mayhem, waving coquettishly. Could it be that some quirk of Japanese culture has doomed her character to play the flighty swan and to candy all those action scenes, no matter what form Gatchaman takes? If such is true then it hints at a damning shallowness of artistic vision, and we can only lament that the courageous orphans of Science Ninja Team Gatchaman – and those who shape their adventures – have matured little across forty years. Some fans may rejoice that a feature film treatment of Gatchaman even made it off the ground, but if the 2013 movie soars at all then, sadly, it is to heights not much greater than adolescent wish fulfilment.

“Bird, go!” has always been the command phrase for transforming the Gatchaman team into ninja mode, but in this instance somebody should most definitely have stood up to director Toya Sato and screamed instead, “Bird, no!”
Posted by Stephen Theaker