The X-Files: Season 10, Vol. 1 by Joe Harris and friends | review by Stephen Theaker 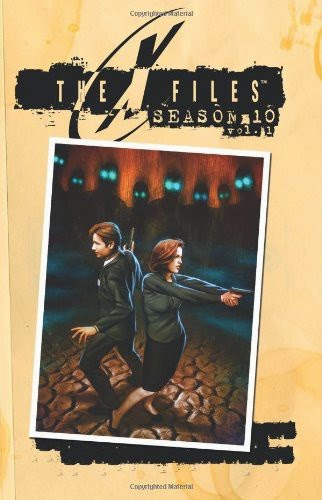 The X-Files: Season 10, Vol. 1 by Joe Harris, Carlos Valenzuela and Michael Walsh (IDW, tpb, 138pp) tries to follow the example of Buffy the Vampire Slayer: Season 8 in providing the comics continuation of a beloved and much-missed television series. Unlike Buffy, Mulder (as played by David Duchovny, until recently shedding his trousers twelve weeks a year on Californication) and Scully (Gillian Anderson, last seen on Hannibal and the BBC) had pretty much given up the fight by the time their series ended, their replacements Doggett (Robert Patrick) and Reyes (Annabeth Gish) taking the limelight up until the originals returned for the disappointingly low-key second feature film.

All four feature in this series, as do other favourites like Skinner, the [redacted] and the [redacted], but Mulder and Scully are the stars. They’re still a couple, still retired from the FBI, but living under assumed names, Scully working as a doctor. The plot follows on from the final episodes of the TV series, which tried to link the cyborg assassin storyline of the later seasons with the alien invasion story that drove its glory days. A group of mysterious types with glowing eyes want to prepare the way for the alien colonisation of Earth to finally go ahead, and for that they need Mulder and Scully’s magical baby William.

I wish I could say it’s fantastic. I really wanted it to be, because I do miss these characters and at its best The X-Files could be magnificent. But this book’s just okay, about on the level of the old Topps series. The sketchy artwork tells the story clearly and does a fair job of capturing likenesses without conveying the eerie atmosphere of the programme – Mulder and Scully fill the frame like superheroes. The story covers all the right territory, but not enough of it is new. If Mulder and Scully ever return to television, you’d be surprised if this story was considered canonical. Readable – for fans, anyway – without being essential. ***
Posted by Stephen Theaker