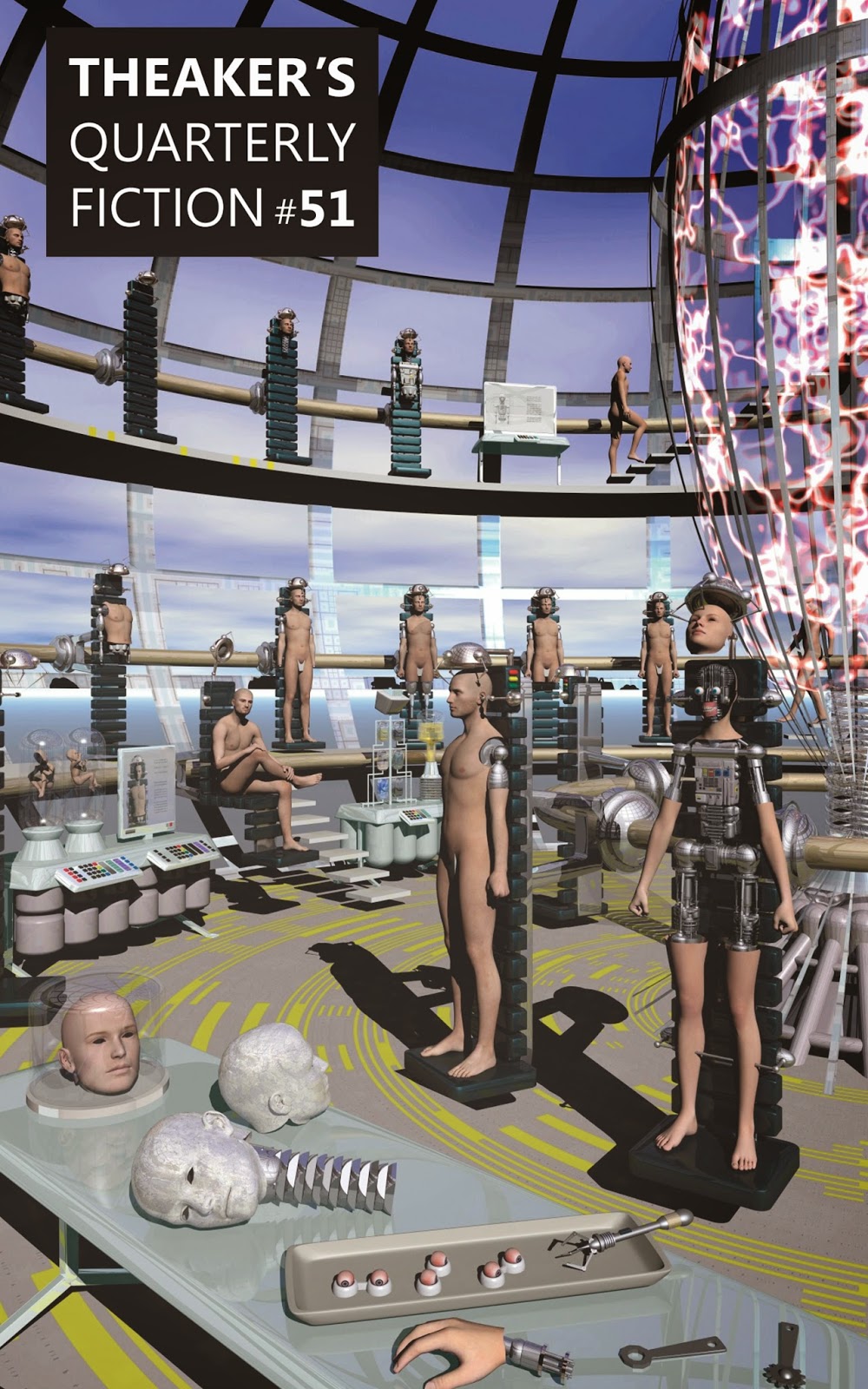 Welcome to Theaker’s Quarterly Fiction #51! We have six stories for you this time: “Too Much Light Makes the Day Go Blind” by Marshall Moore, “One Slough and Crust of Sin” by Walt Brunston, “Water Imperial” by Charles Wilkinson, “The Assassin’s Lair” by Howard Phillips, “Whale on a Tilt” by Andrea M. Pawley and “Cybertronica” by Antonella Coriander. There are also fifteen reviews, by Stephen Theaker, Douglas J. Ogurek and Jacob Edwards.

We review books by Lavie Tidhar, Grant Morrison and Steve Yeowell, Henry Kuttner, David Ramirez and Joe Abercrombie, plus a Brenda & Effie audio play by Paul Magrs. We also consider Space Battleship Yamato, Jupiter Ascending, The Hobbit: The Battle of the Five Armies (twice), the Kindle Voyage, the Amazon Fire TV, season 9 of Supernatural, season 1 of The Leftovers, and season 1 of Constantine.


Here are the contributors to this post-celebration hangover issue:

Antonella Coriander has a plan, but she isn’t saying what it is yet. Her story in this issue, “Cybertronica”, is the fifth episode of her ongoing Oulippean serial, Les aventures fantastiques de Beatrice et Veronique.

Charles Wilkinson’s story in this issue is “Water Imperial”, about the peculiar goings-on at the Imperial Spa Hotel and Conference Centre. His publications include The Pain Tree and Other Stories and Ag & Au. His stories have appeared in Best Short Stories 1990, Best English Short Stories 2, Midwinter Mysteries, Unthology, London Magazine, Able Muse Review, and in genre publications such as Supernatural Tales, Phantom Drift, Horror Without Victims, The Sea in Birmingham, Sacrum Regnum, Rustblind and Silverbright and Shadows & Tall Trees. New short stories are forthcoming in Ninth Letter and Bourbon Penn.

Douglas J. Ogurek’s work has appeared in the BFS Journal, The Literary Review, Morpheus Tales, Gone Lawn, and several anthologies. He lives in a Chicago suburb with the woman whose husband he is and their five pets. This time he reviews The Hobbit: The Battle of the Five Armies. His website can be found at: http://www.douglasjogurek.weebly.com.

Howard Phillips is a dissolute poet whose contributions to this zine have ranged from the mediocre to the abysmal. In this issue he continues his latest autobiographical tale, A Dim Star Is Born, in “The Assassin’s Lair”. The previous instalment received such bad reviews that he wept for three days, burned seventeen unpublished novels, and wrote a series of angry blog posts accusing various parties of disparaging his genius. We asked him why he had taken it so badly, and he replied, “If you need to ask, you’ll never know.”

Jacob Edwards flies with Australia’s speculative fiction flagship Andromeda Spaceways Inflight Magazine, but meets us in the pub between runs. This writer, poet and recovering lexiphanicist’s website is at http://www.jacobedwards.id.au. He also has a Facebook page at http://www.facebook.com/JacobEdwardsWriter, where he posts poems and the occasional oddity. Like him and follow him! In this issue he reviews The Forever Watch by David Ramirez, Space Battleship Yamato and The Hobbit: The Battle of the Five Armies.

Marshall Moore makes his TQF debut in this issue with “Too Much Light Makes the Day Go Blind”. He is the author of four novels (Bitter Orange, An Ideal for Living, The Concrete Sky and Murder in the Cabaret Sauvignon) and three short-fiction collections (The Infernal Republic, Black Shapes in a Darkened Room, and the forthcoming A Garden Fed by Lightning). With Xu Xi, he is the co-editor of the anthology The Queen of Statue Square: New Short Fiction from Hong Kong. In addition to his work as an author, he is the principal at Typhoon Media Ltd, an independent publishing company based in Hong Kong, and he is a PhD candidate in Creative Writing at Aberystwyth University in Wales. For more information, see http://www.marshallmoore.com.

Walt Brunston’s story in this issue is “One Slough and Crust of Sin”, his adaptation of issue two of The Two Husbands. We don’t know where he got those comics – apparently he’s got the full run. We’ve never been able to find them in the UK. He’s said that if we ever cross the pond he’ll let us stay over and read them, but they have guns in the USA, and no NHS, which seems to us a remarkably dangerous combination.