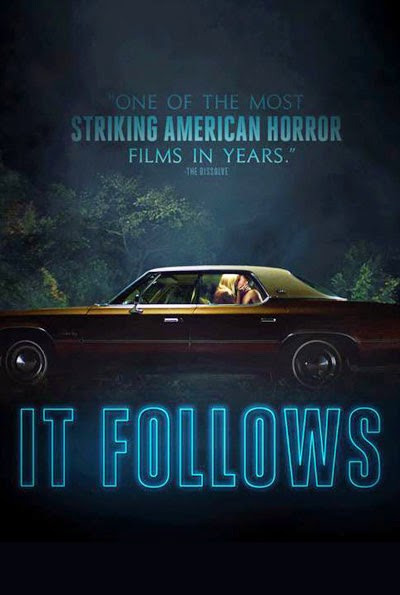 The image of Halloween’s (1978) Michael Myers, with his impenetrable motives and his patient pursuit of his single-minded purpose (to kill), has embedded itself in the horror aficionado’s consciousness. There is something quite unsettling about an impending threat that can’t be reasoned with. Clearly John Carpenter’s iconic film has influenced writer/director David Robert Mitchell’s It Follows, which exploits this strategy of approaching doom, coupled with creepy audio and smart filming techniques, to deliver an atmospheric masterpiece in which everything, from the proliferation of soda cans to the pronounced lapping of waves, is rich in implication.

Jay Height (Maika Monroe) is a somewhat woolly-headed teen who likes to lounge in her pool and gaze up at the sky. After she consummates a budding relationship with Hugh, her life takes a turn for the much worse: Hugh passes on a sexually transmitted ghost – can we call that an STG? – that assumes a human form. The ghost pursues the latest person to contract the curse with a Michael Myersesque determination. “It could look like someone you know,” says Hugh, “or it could be a stranger in a crowd. Whatever helps it get close to you.”

The infected person can divert “It” by sleeping with someone else. However, once it kills the newly infected person, the force moves to the previous person in the chain. Thus Jay is fraught with challenges regarding not only how to evade the pursuer, but also whether and to whom she should pass on the curse. Neighbourhood heartthrob Greg Hannigan? Awkward long-time family friend Paul? Total strangers?

The Fears of Height
It Follows evades the gore, pop-out scares, and petty squabbles of the typical horror film that has a teenage cast. Its believably lethargic teens engage in mundane activities (e.g. sitting on a swing, watching an old sci-fi film, lounging on a beach, playing old maid), yet through all of these ostensibly benign scenes lurks the threat.

In one early scene, Jay’s professor reads an extended passage from T.S. Eliot’s “The Love Song of J. Alfred Prufrock” – the film uses several direct literary quotes – while the camera does a 360 degree pan. It starts with a view outside showing a distant figure (who doesn’t quite fit with the other students) walking unsteadily toward the classroom. The camera then slowly pans around the classroom, giving the viewer time to question what he or she saw outside, before the view returns to the courtyard to reveal the figure has come closer.

This isn’t the only time Mitchell uses the 360 degree pan. The technique sucks Jay Height and the filmgoer down the drain of this nightmare, and creates a boxed-in feeling: no matter which way you turn, you can’t escape this ghost.

The use of sound also distinguishes It Follows. This includes the eighties-style synthesizer-heavy tunes of Disasterpeace’s soundtrack and the unnerving repetition of sounds (e.g. swing set creaking, waves lapping) amongst otherwise quiet settings.

Additionally, though filmed in Detroit, It Follows really takes place in an unknown place, at a time that’s hard to pin down. What are we to make of the odd clothing, the dated automobile, and the old television sets despite the present day feel of the film? Why does Jay’s friend Yara, with her seventies-style glasses, read Dostoyevsky’s The Idiot on a shell-shaped e-reader?

Surfaces and Layers
Mitchell seems obsessed with liquids in this film. Jay and company are often near water sources and/or drinking from aluminum cans. Perhaps this is Mitchell’s way of challenging us to look below the surface. Yes, It Follows is about a supernatural predator, but it also explores sexual-related repercussions, whether they be STDs or emotional turmoil. In other words, it follows.

Adult figures are conspicuously absent in this film, which challenges the viewer to consider how parents’ presence (or lack thereof) in their teens’ lives impacts teenage sexual decisions.

The film evokes other questions, the answers to which are beyond the scope of this review. For instance, why is the human form that the ghost adopts often fully or partially exposed? Also, why does the ghost sometimes choose a guise that resembles characters’ parents?

What Mitchell has achieved with It Follows is a sense of dread that lingers from the strange opening sequence that reveals what “It” is capable of, to the equally disturbing conclusion. See this film, but expect it to follow you long after you’ve left the theatre. – Douglas J. Ogurek *****