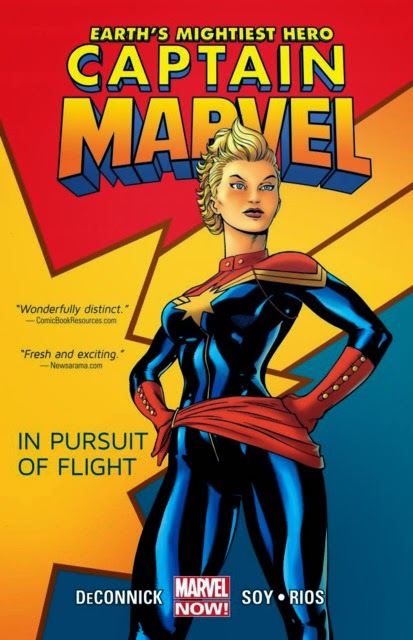 Captain Marvel, Vol. 1: In Pursuit of Flight (Marvel) by Kelly Sue DeConnick. Ms. Marvel aka Warbird aka Carol Danvers drops her swimsuit costume for a more practical outfit, adopts the name Captain Marvel, starts wearing her hair in an odd combover, and takes a flight in her idol’s aeroplane to try and beat a record. She gets thrown back in time and teams up with a band of grounded female pilots. The cover art led me astray: I expected art in the line of Frank Quitely, but it’s more like Dan Brereton. Good in itself, but not what I’d been looking forward to. Sending the character into the past at the beginning of a new series gives the impression of not knowing what to do with her in the present, but the feminism is welcome. The elephant in the room is that while Ms. Marvel is reluctant to take on the name of her predecessor, he nicked that name himself from the real Captain Marvel, the Big Red Cheese, Billy Batson. ***

Captain Ultimate (Monkeybrain) by Benjamin Bailey, Joey Esposito, Boy Akkerman and Ed Ryzowski. Amiable all-ages comic about an old-time superhero who returns to action at the behest of a little boy. I liked the way the Captain was depicted in old-fashioned four-colour dots, but apart from that it didn’t quite hit the spot for me. Likeable, but not quite funny enough. ***

Child of a Hidden Sea (Tor Books), by A.M. Dellamonica. Liked the book, loved the protagonist. A young woman is whisked off to a fantasy world that has the same moon as Earth, where magic works and her birth mother was part of a family of elite couriers. What I liked best was the way she’s keen to get photographs of the wildlife and things like that, and is careful to keep her camera charged. The idea of taking a solar powered charger to a fantasy world tickles me. Reviewed for Interzone #253. ***

Cloud Permutations (PS Publishing), by Lavie Tidhar. Terrific novella about a boy who wants to fly on a world where it isn’t allowed. ****

Criminal Macabre Omnibus, Vol. 1 (Dark Horse Books), by Steve Niles, Ben Templesmith and Kelley Jones. From the writer of 30 Days of Night. Cal McDonald is the American equivalent of John Constantine. He is drunker, druggier, more screwed-up, and prefers his friends dead to begin with so that they can’t get killed. Weird creatures seek him out and his job is usually to kill them. Stories involve ghouls, vampires, werewolves, a haunted car and a succubus. First half has impressionistic artwork by Ben Templesmith, and the second half has cartoonier art by Kelley Jones, which I think suits the OTT stories a bit better. ***

Deadpool Classic, Vol. 1 (Marvel) by Fabian Nicieza, Rob Liefeld, Mark Waid, Joe Kelly, Joe Madureira, Ian Churchill, Lee Weeks, Ken Lashley and Ed McGuinness. The early adventures of the mouthy mercenary, illustrated for the most part in ghastly Liefeldesque style. Marvel at its pre-Quesada worst. The book collects a pair of woeful four-issue miniseries which feature lots of shouting, contorted posing and bursting through walls, plus a couple of other issues. The final story, from the first issue of his monthly series, is an improvement. *

Doctor Who: Hunters of the Burning Stone (Panini UK Ltd), by Scott Gray, Martin Geraghty, Mike Collins. Eleventh Doctor adventures from the pages of Doctor Who Magazine. Sees the return of Ian and Barbara. ***

Doctor Who: Into the Nowhere (BBC Digital), by Jenny Colgan. Novella by Jenny Colgan about the eleventh Doctor and Clara, who end up on a rather nasty planet where skeletons have a tendency to rise up from the ground. An enjoyable little book, perfect for a rainy afternoon. Colgan captures the relationship of Clara and the Doctor rather well. Steven Moffat deliberately built lots of tie-in friendly gaps into their television adventures, so there’s plenty of scope for the two of them to travel together again. ***
Posted by Stephen Theaker