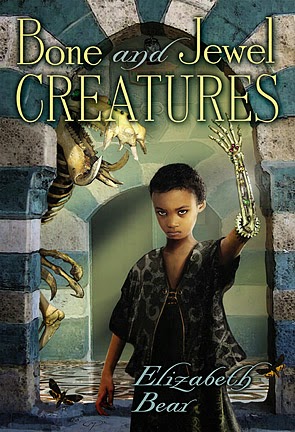 Bone and Jewel Creatures (Subterranean Press), by Elizabeth Bear. A superb novella about an elderly woman who takes in a feral child and fits it with a new arm made from jewels and the remains of its own original arm, while facing the challenge of an evil necromancer. It’s a Subterranean Press book, but the ebook was available at a very reasonable price via Weightless Books. ****

BPRD, Vol. 1: Hollow Earth and Other Stories (Dark Horse Comics), by Mike Mignola and friends. Collects one-shots and other stories about Abe Sapien and the other members of the BPRD, the organisation Hellboy works for. ***

BPRD: Hell on Earth, Vol. 1: New World (Dark Horse Comics), by Mike Mignola, John Arcudi, Guy Davis and Dave Stewart. Some time after the events that began in Plague of Frogs reached their conclusion, the BPRD are working for the UN and investigating the matters the UN wants investigating. Abe Sapien heads off to the woods and encounters an old friend and a demon baby and its giant-sized twin. I enjoyed this a lot. I really like Abe, more even than Hellboy. ****

BPRD: Vampire (Dark Horse Comics), by Mike Mignola and Scott Allie. A member of BPRD has had a pair of vampire souls trapped within him (I think) and he wants to find out more about the creatures. I wasn’t entirely sure what was going on, but it looked terrific. I’ll probably need to re-read all these Hellboy books and spin-offs in order once I have them all. ***

Bravest Warriors, Vol. 1 (KaBOOM!), by Joey Comeau, Mike Holmes, Pendleton Ward and Ryan Pequin. Based on the new science fiction cartoon from the creator of Adventure Time, and just as much fun. ****

Buffy the Vampire Slayer, Season 8, Vol. 6: Retreat (Dark Horse Books), by Jane Espenson, Georges Jeanty and Joss Whedon. I can’t hate any Buffy comic, but didn’t enjoy this as much as hoped. ***

Buffy the Vampire Slayer, Season 8, Vol. 8: Last Gleaming (Dark Horse Books), by Joss Whedon, Georges Jeanty and Scott Allie. A disappointing end to a series that had begun so promisingly. ***

Buffy the Vampire Slayer, Season 9, Vol. 1: Freefall (Dark Horse Books), by Joss Whedon, Andrew Chambliss, Georges Jeanty and Karl Moline. An improvement on Season 8, which by the end I’d gone off so much that I would never have bought this if the Kindle edition hadn’t been on sale. ***

Buffy the Vampire Slayer, Season 9, Vol. 2: On Your Own (Dark Horse Books), by Andrew Chambliss, Scott Allie, Georges Jeanty and Cliff Richards. Feels more like a continuation of the TV series. ****

Buffy the Vampire Slayer, Season 9, Vol. 3: Guarded (Dark Horse Books), by Andrew Chambliss, Jane Espenson, Drew Z. Greenberg, Georges Jeanty, Karl Moline and Joss Whedon. Buffy has a go at being a bodyguard, but can she put work before her true calling? Enjoyable but the emphasis on how easy the zompires (zombie vampires, created after Buffy’s world was sealed off from magic) are to kill is making them feel like a negligible threat. ***

Captain America, Vol. 1: Castaway in Dimension Z (Marvel) by Rick Remender, John Romita Jr, Klaus Janson, Tom Palmer, Scott Hanna, Dean White, Lee Loughridge and Dan Brown. A thrilling book where Captain America is taken to another dimension for a lengthy stay, a dimension of monsters ruled by Arnim Zola and his horrible experiments. The spirit of Kirby is strong in this one. ****
Posted by Stephen Theaker