Lone Wolf 25: Trail of the Wolf | review by Rafe McGregor 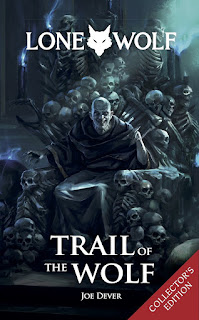 With the release of Trail of the Wolf to schedule, I must confess that my cautious optimism about Holmgard Press has matured into quiet confidence… to the extent that I’d be very surprised if the late Joe Dever’s whole Lone Wolf cycle (books 1 to 32) hasn’t been published by this time the year after next.  As I mentioned in my review of Lone Wolf 24: Rune War, I have never played books 25 and 26 so I was particularly pleased when this arrived very promptly in the post (from Holmgard Press’s website, at: www.magnamund.com).  Trail of the Wolf is the sequel to Rune War and although I provided a brief summary of the New Order series (books 20 to 32) in my review of Lone Wolf 22: The Buccaneers of Shadaki, it is worth drawing attention to the way in which the cycle has been constructed.  The Kai (books 1 to 5) and Magnakai (books 6 to 12) constitute a single quest (or “campaign”, in role-playing game terminology) with a single protagonist (“player character”), Lone Wolf. The Grand Master series (books 11 to 20) consists of ten standalone adventures, in which Lone Wolf plays the part of troubleshooter for the good gods Ishir and Kai, foiling the evil god Naar’s plots to extend his influence in Magnamund (the fantasy world in which all the gamebooks are set). The New Order series focuses on a new protagonist (whose name is randomly-generated, leaving me with “True Friend” for mine) and combines campaign and standalone adventures.  The standalone adventures are Lone Wolf 23: Mydnight’s Hero (reviewed here) and Lone Wolf 26: The Fall of Blood Mountain.  There are four separate campaigns: books 21 (reviewed here) and 22; books 24 and 25; books 27 and 28; and the final four books, beginning with Lone Wolf 29: The Storms of Chai (29 and 30 are reviewed here and here; 31 and 32 have yet to be published).

In consequence, I don’t recommend playing Trail of the Wolf without playing Rune War first, although, such is the skill with which Dever created the series, that they can actually all be played as standalone adventures. Rune War saw the New Order of the Kai (the warrior elite of Sommerlund) pitted against Lord Vandyan of Eldenora.  Driven by his hubris, guided by Naar, fuelled by the power of the Runes of Agarash, and with an innumerable horde of Vorka (spawn of Agarash the Damned) at his disposal, Vandyan was in the process of conquering central Magnamund.  While Lone Wolf led the conventional crusade against Vandyan’s army, True Friend slipped inside Skull-Tor special forces style and destroyed the Runes, guaranteeing victory.  Naar managed to snatch his own victory from the jaws of defeat, however, sending Zorkaan the Soultaker, a powerful entity from the Plane of Darkness, to live up to his name and snatch Lone Wolf.  The destruction of the Runes appears to have trapped Zorkaan on Magnamund and Naar took advantage of the situation to place him under the control of the necromancer Xaol (a recurring villain in the New Order series).  Xaol is holding Lone Wolf prisoner in Gazad Helkona, a former Darklord fortress city (the Darklords were defeated by Lone Wolf in the initial campaign of the cycle, books 1 to 12), and True Friend’s mission is to rescue him. The plan is to deploy to the Shezar Hills in Guildmaster Banedon’s flying ship, yomp fifty miles across-country, infiltrate the city, locate Lone Wolf, and await a hot extraction atop one of the citadel’s towers… what could possibly go wrong?  As such, the game can be divided into four parts: a wilderness adventure in the Shezar Hills and the Dead Forest of Helkona; an urban infiltration into the fortress; and then two dungeon crawls, the first to find Lone Wolf and in the citadel and the second to escape to Darklord Chlanzor’s observatory dome and survive until Banedon arrives.

Regarding the mechanics of gameplay, the narrative is quite short, very deadly, and heavily reliant on luck (at the Random Number Table, the game’s equivalent of a decahedral die).  I found the adventure by far the toughest of the New Order series so far (i.e. books 21 to 24) with True Friend being killed three times, once by fall and then by Xaol and an Urgaroh (a reptilian humanoid I could do without) in two combats.  It doesn’t help that when you do find Lone Wolf, he is in no fit state to lend a sword-arm.  The following can all make the game a little less deadly and a less reliant on luck:

In keeping with all of the other Collector’s Editions (with the exception of Lone Wolf 1: Flight from the Dark), there is a bonus adventure, “Dire in the Dark”, which is written by August Hahn.  I usually play these and include brief comments in my review, but I'm writing this under the COVID-19 lockdown and probably won’t get the opportunity for some time. The player character is a Dire, a dead soldier who is now one of the Lifeless, denied death and doomed to walk Magnamund.  This is the fourth instalment of the character’s adventures, which are all authored by Hahn, began in the bonus adventure of Lone Wolf 14: The Captives of Kaag, and continued in Lone Wolf 16: The Legacy of Vashna and Lone Wolf 19: Wolf’s Bane.  My Lone Wolf library is eclectic with regard to editions and of these three I only have Wolf’s Bane in the Collector’s Edition, but I think I’ll play “Dire Straights” before I return to “Dire in the Dark”.  In summary, Trail of the Wolf is a great gamebook, well-worth the price, excellent on its own, but even better if played as part of the cycle.
Posted by Rafe McGregor