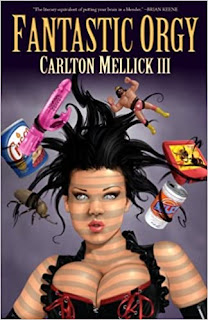 One of the most common drawbacks of the contemporary short story, especially in genre fiction, is sameness. Carlton Mellick III’s Fantastic Orgy, like many of this bizarro author’s works, stands out as a refreshing exception. With his utterly original content and tight writing style, Mellick introduces a smorgasbord of characters, situations and ideas that the reader has likely never encountered. Whether Mellick is writing about a lollipop-headed musclebound stud sampling cheese, an inadvertent transvestite using her hair to combat berserk enemies, or a “fat lazy half-assed drummer” who’s constantly drunk, he keeps the reader engaged with stories that are humorous, fast-moving and at times poignant.

In some stories, Mellick’s protagonists have a clear goal (e.g. to obtain an STD, to score a “laydaaay”). In others, the characters don’t really know what they want, but they do achieve some realisation. In either case, the reader will be transfixed by the story’s contents.

The collection opens with “Candy Coated”, in which a muscular young man who has a Tropical Sensation-flavored lollipop for a head goes to a cheesery, where he hopes to hook up with a woman. He just has to watch out for the many bearded truckers who are intent on licking his head. The story comments on the shallowness of one-dimensional males looking to “score”.

In “Ear Cat”, more than ninety percent of the population suffers from agoraphobia. Anxiety-ridden protagonist Irene finds comfort in her collections of lamps, “curly horns” (as in the instrument), and expired Gen-cats. Then the Kitty of the Month club delivers ear cat, who has a human-like face and yes, a body covered in ears. After spending time with ear cat, along with a couple other intriguing Kitty of the Month deliveries, Irene starts to discover some things are not as important as she thought.

A punk band with a hit song called “Glass Sandwiches” is the focus of “City Hobgoblins”, where dangerous creatures lurk outside. Things reach a crescendo when a strange object crashes through a window and the bass player narrator falls in love with a shark woman. The band’s discussions and fuck it all attitude are what make this selection particularly funny. Favourite characters include Ass Fort, a constantly inebriated drummer, and Lenny, an artist who insists on preserving all life.