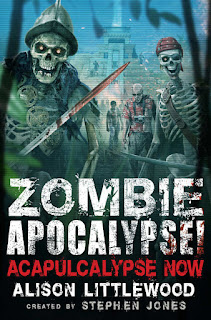 Despite the painfully punning title, Zombie Apocalypse: Acapulcalypse Now (Robinson) is not a spoof, in fact it’s quite the gorefest, almost a paperback nasty. It takes place in the shared world created by editor Stephen Jones and his collaborators in the typographically inventive anthology or mosaic novel Zombie Apocalypse. Happily this one doesn’t have any difficult-to-read handwritten passages, though it does have lots of italics, for emphasising words, for thoughts, for Spanish phrases. The Monumento que Canta, an ancient ruin, has been plucked from its original location and placed on the top of an ersatz pyramid near Acapulco: a theme resort, the Hotel Baktun. As new staff and the first guests arrive, it’s not long before reports come in of serious problems back in London, of plague pits discovered under cemetaries and “members of the public reportedly biting and scratching each other”.

This isn’t a novel that messes about: by chapter nine of sixty-four the apocalypse is in full swing and by chapter fourteen death has reached the hotel, by way of the sea. First a swimmer disappears from the ocean and then a wonderfully-described man appears at the pool: “Ethan thought at once of fish, delicately nibbling, and he shifted his gaze to the man’s eyes. Undercooked eggs, he thought. The jelly of them.” This first zombie to arrive gets hold of a girl, and when he falls to the floor, “a shred of fabric came away with him. Then Ethan realised it wasn’t fabric but flesh, pale on one side, bloody on the other.” The poor lad then goes through the agony of being unable to persuade his mother to run from his infected father: a scenario typical of what this ruthless book puts its poor characters through.

It feels very much like the tie-in that it is, reminding me of the tight, fast-moving Doctor Who novels people like Mark Morris, Paul Cornell and Kate Orman would write. There’s nothing wrong with that – many authors made a name for themselves with those books, and a series like this could perform a similar role for new horror writers, as well as providing a playground for more experienced hands, a chance (as here) to step out of their usual territory. The difference in this tie-in is that no time traveller is coming to save anyone. They must rely on each other, and the book pushes them gleefully into ever more dangerous situations. As with other tie-ins, fans of the series will get the most out of it, but other horror readers should find it entertaining and efficient, whipping through the story like it has somewhere important to be and delivering plenty of shocks along the way.***