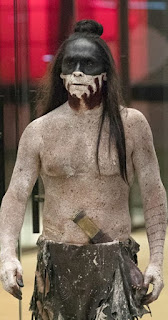 Here are my answers to the questions that the world has been asking this week. Feel free to add your own answers in the comments!

We all have odd quirks what's some of yours? – GingerNuts of Horror

I can't go to sleep in between books. If I've finished my book I have to choose a new one and I've stayed up two hours doing that before now.

Anyone else have family who doesn't read your books? – Deborah Maroulis

My wife read my first novel but none since then. I don't blame her.

I couldn't choose between between three of them. During Django Unchained, a chap at the front of the cinema stood up when Jay-Z's rap came on and performed it for us in time with the film. He was escorted out shortly afterwards. Fast and Furious 6: The build-up to Jason Statham's appearance. Those who had seen Tokyo Drift were slack-jawed because we knew what was coming, while for the other half it all came as a complete shock. And Doctor Who: The Day of the Doctor. The twelfth Doctor's eyebrows! I have never heard an audience react like that. It was like white noise. The sound of three hundred geeks exploding with happiness.

Your Twitter handle is now your job. What do you get paid to do? – Carlos

First time I needed an internet handle I used the name of a character from a script I entered in a BBC screenwriting contest: Rolnikov. So I guess now my job is to travel from planet to planet having adventures that aren't quite funny enough to win comedy screenwriting competitions.

If band names were literal, what would be the scariest band to fight? – Ian Karmel

Have you ever been in a darkened room? Nothing could be scarier than The Shadows. They wouldn't even kill you. They would just keep scaring you, over and over. You wouldn't be able to sleep. They'd always be at the corner of your eye. They'd follow you everywhere. Brrr.

If you could get ONE movie made, what would it be? – @Dene71

Tom Hanks in an adaptation of Clifford Simak's novel Way Station. I've always thought that would be brilliant.

I want to know what you think is the best single episode of any television show ever and why. – Ian Browne

As far as science fiction goes, I would lean towards "Kiksuya" in season two of Westworld. It's a wonderful example of conceptual breakthrough, as Akecheta slowly realises what he is, and discovers what his world is, and it's heartbreaking.
Posted by Stephen Theaker