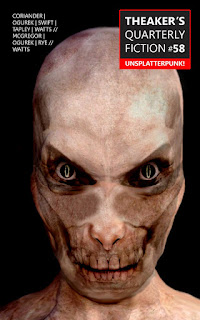 Theaker’s Quarterly Fiction #58: Unsplatterpunk! is now out! Guest-edited by Douglas J. Ogurek, this is a special issue, an anthology featuring five founding tales of unsplatterpunk, a brand new genre! Douglas describes it as “extreme horror stories [that] offer a positive message, whether blatant or subtle, within their otherwise vile contents”. So don’t expect any slap-up dinners in this issue!

As Douglas says in his editorial, this isn’t a volume you’d want to pull out on family reading night, and you might want to avoid discussing it in detail with your coworkers. But it is interesting! Here’s what Douglas had to say about the stories in this issue:

In M.S. Swift’s deliberately disjointed “A Desert of Shadow and Bone”, brutality meets philosophy in an extravaganza of limb hacking, gentry slaughtering, and drug use that makes a statement about corporate greed and the repression of women. What starts as an extreme, albeit intimate ritual beside a tree-lined natural pool builds to a climax that is both apocalyptic and indicative of personal growth.

There’s something awry about an impending birth in “Quand les queues s’allongèrent”. When you discover what it is, you’ll get a jolt of humour and revulsion. Antonella Coriander offers a slashing take on misogyny and women’s empowerment.

Drew Tapley’s “The Fisherman’s Ring” delves into the absurd as he unveils what really happens in the secretive ceremony to select the next Pope. You get ringside seats for a series of trials full of pain-tertainment. You also get hope and solidarity.

In “The Armageddon Coat”, the collection’s longest work, Howard Watts (who also supplies the terrifying cover) takes us on a more serious journey of two pre-teens as they try to make sense of their world following an alien attack. The theme of innocence vs experience swirls amid political maneuvering, mass destruction, and vicious fighting to survive.

We also have a handful of reviews this issue, from Douglas himself, Rafe McGregor and Rose M. Rye (yes – after two long years we have once again published a female writer!), and they look at the work of Martin Charbonneau, Joe Dever, Gary Chalk, Neil Gaiman and Daniel Egnéus, as well as the films Arrival and Doctor Strange, and season eleven of the television show Supernatural. The issue concludes with twenty-four pages of notes and ratings for almost everything Stephen Theaker read during 2016 but didn’t review for us.


Here are the munificent contributors to this issue:

Douglas J. Ogurek’s fiction, though banned on Mars, appears in over 40 Earth publications. He is the guest editor of this special issue. Ogurek founded the literary subgenre known as unsplatterpunk, which uses splatterpunk conventions (e.g. extreme violence, gore, taboo subject matter) to deliver a positive message. More at http://www.douglasjogurek.weebly.com.

Drew Tapley is a copywriter and journalist, and has been publishing in Canada, Australia, and his native England for the last decade, both in print magazines and journals, as well as online. He is now based in Toronto, and has been making short films for the last five years. Some of his films have screened at film festivals throughout the world. He was recently published in the UK’s Popshot Magazine, and has two published books: one fiction, and one nonfiction.

Howard Watts is a writer, artist and composer living in Seaford. He provides the wraparound cover art for this issue, as well as a brilliant story. His artwork can be seen in its native resolution on his DeviantArt page: http://hswatts.deviantart.com. His novel The Master of Clouds is available on Kindle.

M.S. Swift writes horror and dark fantasy inspired by the ancient landscapes of the U.K. His contemporary horror tales have been published by Ghostwoods Books, the First United Church of Cthulhu, Schlock! Webzine and Schlock! Bi-monthly. He is currently working on a dark fantasy series inspired by the late medieval witch hunts, the first story of which has been published through Horrified Press. His long-term goal is to write a series of weird tales inspired by the early work of Wordsworth and Coleridge. He is paying off the accumulation of negative karma by working in the English education system.

Rafe McGregor Rafe McGregor is the author of The Value of Literature, The Architect of Murder, six collections of short fiction, and one hundred and fifty magazine articles, journal papers, and review essays. He lectures at the University of York and can be found online at @rafemcgregor.

Rose M. Rye is an actual woman, honestly, but she’s writing for us under a pseudonym because she doesn’t really want to be hassled at work by people who disagree with her opinions about television.

Stephen Theaker’s reviews, interviews and articles have appeared in Interzone, Black Static, Prism and the BFS Journal, as well as clogging up our pages. He shares his home with three slightly smaller Theakers and works in legal and medical publishing.