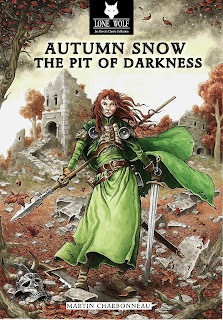 Stephen Theaker has been kind enough to allow me to indulge my nostalgia for 1980s fantasy gamebooks in his magazine and over the course of three reviews – The Voyage of the Moonstone (TQF55), The Buccaneers of Shadaki, and The Storms of Chai (both TQF57) – I’ve charted the remarkable story of Joe Dever’s Lone Wolf series. The latest of my reports contains a couple of surprises of the kind I’ve come to expect by now, given the series’ incredibly complicated publishing history, characterised by first falling victim to and then being perpetuated by the domination of internet technology at the turn of the century. To begin at the beginning, I first found out about The Pit of Darkness courtesy of Project Aon (www.projectaon.org), the voluntary organisation that has done so much to keep the series alive during its many years in the publishing wilderness, in a bulletin listing the current availability of Lone Wolf products dated 8 July 2016. Megara Entertainment founder Mikaël Louys began crowdfunding for the volume in September 2014, the main purpose of which was to secure the services of the original Lone Wolf illustrator, Gary Chalk, who had an apparently acrimonious split with Dever between the release of Castle Death (#7, 1986) and The Jungle of Horrors (#8, 1987). The gamebook is only available from the Megara website direct (www.megara-entertainment.com) and has been released in both French and English versions. The two are presented distinctly on the website and although the price is quite steep (about £30 at the time of my purchase, no doubt more now), it includes postage and packaging and my copy arrived promptly and in perfect condition. I nonetheless have two small complaints about Megara. First, they don’t seem to advertise very well – I ordered immediately after following the link from Project Aon and the copy I received is already a “THIRD PRINTING, REVISED” – what happened to the first two printings? Second, and this may well be the reason for being in a third printing already (assuming all three were released in 2016), there are quite a few typos and formatting errors in the book (albeit all minor).

The volume itself is entirely pleasing, if printed in a slightly unusual format (a hardback that is either medium octavo in size or extremely close to it) with a wonderful colour cover by Chalk, around double the ten full-page black-and-white illustrations originally intended, and large easy-to-read print. Chalk’s artwork is highly stylised and his clear lines, imaginative use of negative space, and slightly disproportionate figures will be instantly recognisable to his fans from the eighties. His style is especially well-suited to children’s illustrations, in which market he has worked extensively, although I noted that the innocence and simplicity of his original Lone Wolf work has been eclipsed by a vision of Magnamund (the world of Lone Wolf) that is both more sinister and more intricately detailed. Chalk’s Vassagonian pirates are a perfect example, depicted in all their bloodthirsty savagery on the pages adjacent to sections 7 and 256 – not a Pirates-of-the-Caribbean-style comedy character in sight. The Pit of Darkness thus has two major selling points: it is the first Lone Wolf gamebook to unite Dever and Chalk in thirty years (Dever is credited as having “Edited and Augmented” the volume) and it is the first Lone Wolf gamebook to feature a female protagonist. The latter is particularly welcome, although in fairness to Dever the eighties wasn’t exactly a decade known for its equality of opportunity. Nor has the Kai Order eschewed gender discrimination entirely as male and female candidates are required to pursue different paths, the former to become New Order Kai Lords and the latter to become New Order Kai Konor. Autumn Snow is one of the latter, having joined the Konor when she was seven, mastered five of the ten Kai disciplines over the next seven years, and reached the rank of Initiate. The Lords and Konor study the same disciplines and this level of expertise puts Autumn Snow at precisely the same level as Lone Wolf at the beginning of the series, in Flight from the Dark (#1, 1984).

There is no explicit dating, but the story is set a year after Dawn of the Dragons (#18, 1992), presumably in MS 5081, while Lone Wolf is away, presumably on his last mission as a player character, The Curse of Naar (#20, 1993). This is a post-Darklords Magnamund, but is – just like our own post-Cold War world in the nineties – going through more than a few teething troubles. Autumn Snow is invited to join her principal instructor, Kai Lord Silver Flame, on what appears to be a routine investigation of sightings of former Darklands creatures on the Isle of Kirlu, which is part of the Kirlundian archipelago off the coast of Sommerlund. The first part of the gamebook takes place at sea, before Kirlu is reached, as the merchant ship on which Autumn Snow and Silver Flame are travelling is attacked by the aforementioned bloodthirsty savages. The battle involves a series of tough and exciting combats and leaves Autumn Snow the sole survivor of the crew, with Silver Flame missing in action presumed dead. Despite the fatal encounter with the pirates there is still a chance that the main mission is routine, but of course it proves not to be and when Autumn Snow arrives in Misty Bay after a dangerous journey on foot, she learns that Giaks (Magnamund’s orcs) have been sighted in the ruins of Wytch Aieta Nematah’s citadel. Autumn Snow infiltrates the ruins, finds a lot more than Giaks to fight, and the final part of the gamebook switches from a wilderness to a dungeon adventure (to use the old Dungeons & Dragons terminology). The Pit of the title lies beneath the ruins and it quickly becomes evident that the appearance of the Vassagonian pirates was no accident as the Vassagonians and Drakkarim, two of Magnamund’s most evil human races, are in league together.

From a gaming point of view, I thought the level of difficulty was particularly well-pitched, the mission challenging rather than suicidal. The toughest combat is probably with the Pit itself and players will need one of the disciplines of Mindblast, Mindshield, or a high initial Combat Skill to survive. With regard to disciplines, I found Tracking useful and – as always – Weaponskill and Healing, although Martin Charbonneau has introduced his own take on the latter. With regard to the actual mechanics of play (which follows the Lone Wolf gamebooks exactly and also has the traditional 350 sections), I was very interested to see that a third option is being tried for the Healing discipline. Back when I first came to the series in the mid-eighties Healing allowed one point of Endurance to be restored for each section where one was not involved in combat. When I chose my five disciplines, Healing was my first choice, followed by Weaponskill (the former to restore my character’s Endurance, the latter to boost his Combat Skill) and I can’t imagine how anyone could have managed without both. Dever must have decided that Healing was too powerful – and, in retrospect, with the Sommerswerd, Healing, and a bit of commonsense I don’t think there was too much to challenge Lone Wolf post-Darklords – because in The Voyage of the Moonstone (#21, 1994), which launched the New Order series, a limit was placed on the amount of Endurance the discipline could be used to restore. In The Pit of Darkness, the limit is gone and Endurance is restored at the rate of two points rather than one, but only at selected sections (indicated by a grey rather than black section number). There are naturally never any grey sections around when you need them, but allowing for the fact that I’ve only used this system in a single gameplay I think it is the best so far and part of the reason for the balance I noted – not too easy, like the Kai Grand Master series (books 13 to 20), or too hard, like the tail end of the New Order series (books 21 to 32). Having discovered the secret of the Pit, the adventure ends with Autumn Snow en route to the Maakenmire, a swamp south of the Wildlands. The second Autumn Snow adventure is Slaves of the Mire, but there are no publication details available in The Pit of Darkness or on the Megara website. My worry as I write this is that it will have to be crowdfunded too, in which case we’re unlikely to see it in print for two years (given the rate at which The Pit of Darkness was printed). Hopefully, that’s not the case, especially if the series is reaching new fans with Dever completing the long-awaited final four New Order adventures. I think the Autumn Snow series could be an outstanding addition to Magnamund – the best since the Magnakai series ended with The Masters of Darkness (#12, 1988) – but word will need to spread beyond the Megara website if it is to reach its potential.
Posted by Stephen Theaker