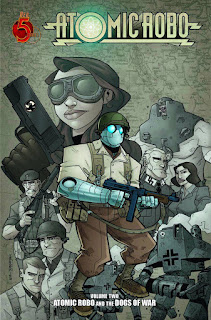 Created by Nikola Tesla, Atomic Robo is a stout robot with big, expressive eyes who seems to have spent the twentieth century fighting evil and having adventures. There are similarities with Hellboy – his dry sass, the art style, his strength and toughness – and in some ways the comic does for science and adventure stories what the Hellboy comic does for supernatural tales and the weird. Unlike Hellboy, Atomic Robo wears trousers and shirts, which may seem a silly thing to note, but there’s no doubt that it’s part of the character’s appeal: it is visually intriguing to see a robot wearing clothes.

In volume one Atomic Robo fought mad Nazi scientists, giant ants and a pyramid advancing on Luxor, and accompanied the Viking probe to Mars (at Carl Sagan's request). Volume two, again written by Brian Klevinger (as are all volumes to date; the book feels very much like the work of contented creators), continues in a similar vein, with much light-hearted Nazi-smashing, though this time the action all takes place in World War II.

With the assistance of Atomic Robo's arch-enemy, Lord Heinrich von Helsingard, Nazi scientists have built Laufpanzers, walking tanks, and it's the hero robot's job to destroy them before they stymie the allied invasion of Sicily. If he can manage that, it's on to Guernsey where the Germans have built a second superweapon, a weather cannon that will “destroy England with a hurricane the size of England”. All it lacks is a power source…

The predominant mode is three or four stacked panels per page, the widescreen ratio thus gently created lending itself very well to Scott Wegener’s cinematic action. The reader drops through the panels at pace, but dawdlers are repaid in detail and character. The book looks fantastic on an iPad, Ronda Pattison's colours being particularly attractive when backlit, although the close-up approach taken by Guided View, presumably to make the book readable on smaller devices, soon annoys; iPad readers will revert to the full-page view.

The first five volumes of the comic are all currently available on Comixology for three pounds or so, but the two I've read so far would still be recommended at double the price. I like Captain America comics, but if you’ve ever thought they’d be better if Cap was pals with the Challengers of the Unknown and rather more of an atomic robot, this is the series for you. A quick but charming read with wide appeal.