The Ballad of Black Tom, by Victor LaValle | review by Rafe McGregor 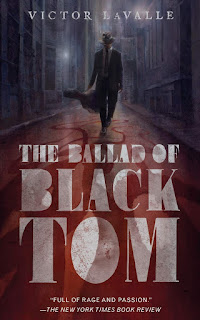 Read on its own, Victor LaValle’s The Ballad of Black Tom is a fine example of a novella in the hybrid genre of the weird tale – or perhaps, more accurately, the new weird.  In The Weird Tale (1990) and The Modern Weird Tale (2001), S.T. Joshi defines the weird tale as a retrospective category of speculative fiction, published from 1880 to 1940, that is essentially philosophical in virtue of representing a fully-fledged and fleshed-out world view. The new weird was initially associated with China Miéville in the UK and subsequently Jeff VanderMeer in the US (although both Miéville and Joshi reject the term). In their introduction to the short story collection, The New Weird (2008), VanderMeer and his wife, Ann, distinguish the new weird from the weird tale in terms of the former combining real-world complexity with transgressive fantasy and contemporary political relevance. Read in conjunction with H.P. Lovecraft’s “The Horror at Red Hook”, which was first published in Weird Tales in January 1927, The Ballad of Black Tom is a deliberate and definitive deconstruction of the original short story. LaValle takes one of Lovecraft’s most overtly and viciously racist narratives and reimagines the character, action, and setting represented by Lovecraft from a twenty-first century that is conscious of racial prejudice, social injustice, and police impunity. LaValle dates his story to 1924, when Lovecraft and his wife, Sonia Greene, were living in Flatbush and the real horror of Red Hook for Lovecraft was the extent of its multiculturalism, which stimulated his racism and xenophobia and fears of miscegenation and evolutionary reversal. In contemporary terms, Lovecraft believed he saw first-hand at Red Hook evidence of the white genocide conspiracy theory, which is one of the reasons he returned to his sanctuary in Providence, Rhode Island, after less than two years. LaValle is an African American novelist and short story writer from Queens, who lives in Washington Heights, and his complex relationship with Lovecraft is revealed in the dedication of the novella, ‘For H.P. Lovecraft, with all my conflicted feelings’.

“The Horror at Red Hook” is a traditional occult detective story and Lovecraft’s occult detective – Thomas F. Malone of the New York Police Department – is a sensitive, cerebral hero who pursues his supernatural inquiries while serving the public in his role as a police detective: ‘He had the Celt’s far vision of weird and hidden things, but the logician’s quick eye for the outwardly unconvincing; an amalgam which had led him far afield in the forty-two years of his life, and set him in strange places for a Dublin University man born in a Georgian villa near Phoenix Park.’  The ‘Dublin dreamer’ was a poet in his youth, is a regular contributor to the Dublin Review, and employs his ‘experiment in police work’ to investigate the macabre, the rotten, and the terrifying that lurks beneath the veneer of the everyday.  Lovecraft employs a third-person narration that adheres very closely to Malone’s perspective, with which the reader is intended to empathise. The story is divided into seven sections, the first of which introduces Malone with pathos, a tall, well-built, ‘wholesome looking’, ‘normal-featured, and capable-looking’ man who is convalescing in Pascoag, Rhode Island, and suffering from some kind of post-traumatic psychological disorder brought on by a particularly harrowing incident during his police service. LaValle’s novella consists of eighteen short chapters, divided into two equal parts, “Tommy Tester” and “Malone”.  The novella is also narrated in the third person, from Charles Thomas Tester’s (known first as Tommy and then Black Tom) point of view in the first part and Malone’s in the second.  The chapters written from the point of view of Tom, a twenty-year-old African American hustler with a limited command of both music and magic, adhere closely to his perspective, inviting the reader’s empathy. In contrast, LaValle maintains a narrative distance from Malone in those chapters written from his perspective and Tom replaces Malone as the protagonist of the story. LaValle’s Malone is described as follows: ‘Tall and thin and lantern-jawed, his eyes dispassionate and surveying.’ Malone is dispassionate, insensitive, and pitiless. He has been assigned to the Butler Street station in Brooklyn for the last six years and is content to be complicit in the structural, institutional, and interpersonal racial violence perpetrated by the police in order to pursue his supernatural inquiries. This departure from Lovecraft’s characterisation is indicative of departures from the original sequence of events to come, with LaValle employing the conceit that Lovecraft based his story on unreliable newspaper reports of the events.

In both the short story and the novella, the sequence of events that underpin the plot are initiated by Robert Suydam, the wealthy scion of an old Dutch family who lives in a mansion in Martense Street in Flatbush. Suydam is a student of the occult who has acquired some magical ability and whose researches have brought him into company frowned upon by his family, most notably that of the Southern European, Middle Eastern, and East Asian immigrant communities in Red Hook and Five Points. Suydam’s relatives are attempting to have him pronounced mentally incompetent, ostensibly out of concern for his wellbeing, but actually out of concern for their inheritances. In The Ballad of Black Tom, they have hired a pathologically racist private investigator, Ervin Howard (a thinly disguised Robert E. Howard), and used their social influence to secure police assistance in making the case against Suydam. Malone has been assigned to assist Howard in consequence of his well-known interest in the occult. Suydam is, however, completely compos mentis and preparing to initiate a two-stage plan: to first found a cult dedicated to the worship of the Sleeping King and to then enact a ritual to wake the Sleeping King. The Sleeping King is a reference to Cthulhu, the most famous of Lovecraft’s pantheon of Great Old Ones, who was introduced in the short story “The Call of Cthulhu”, which was first published in Weird Tales in February 1928. The Great Old Ones are initially represented as gods who have been imprisoned, but are subsequently revealed to be powerful aliens at rest in either the remote regions of the Earth, other dimensions, or both. Cthulhu lies at the bottom of the Pacific Ocean, in the ruins of the sunken city of R’lyeh, a circumstance to which his devotees allude in their chant: ‘“In his house at R’lyeh dead Cthulhu waits dreaming.”’

Suydam decides that his recruitment drive will take the form of a party in his mansion and target society’s marginalised, oppressed, and victimised on the basis that they will be more receptive to what amounts to a religious revolution followed by an apocalypse. Suydam recognises Tom’s ability as a conjurer and hires him to assist at the party to which he has invited members of the immigrant communities with which he is already familiar as well as African Americans from Harlem. With Tom’s assistance, Suydam is successful in inaugurating his cult, although he is of course yet another rich white man assuming a leadership role over men and women of various shades of brown. Suydam then sets about the second part of his plan, the waking of the Sleeping King, once again with Tom’s assistance.  Malone meets Tom during his surveillance of Suydam, attends Suydam’s hearing, is pleased by his successful defence of his mental competence, and returns to his work on illegal immigration. In the weeks following Suydam’s hearing, his name is mentioned with increasing regularity in Red Hook and Malone suspects that he is involved in either criminal or occult activity, or both. Malone discovers that Suydam has bought three tenement buildings on the seafront and moved in with a gang of fifty hardened criminals, led by an African American known as Black Tom. He does not make the connection with Tommy until later and the racial prejudice he shares with Suydam results in both men underestimating Tom’s mastery of the situation. In pitting Malone (and Howard) against Tom, LaValle provides an explicit commentary on the racial, social, and political problems that have given rise to the Movement for Black Lives (M4BL) and its various component organisations, including Black Lives Matter. He also addresses the related but distinct phenomenon of police militarisation in the US directly in spite of his historical setting. LaValle’s great achievement is that he succeeds in both telling a weird tale and providing overt political commentary without ever straying into the realm of the didactic. This is a difficult bit of authorial magic to pull off because the enjoyment of a tale well told and reflections on contemporary violence typically pull the reader in opposite directions, each distracting from the other.  Not so with The Ballad of Black Tom. I shall nonetheless conclude on a note of regret, that the circumstances to which LaValle draws attention seem to have deteriorated rather than improved since the novella was published.