November novel-writing: a few thoughts about what worked well this year

I didn't officially take part in Nanowrimo this year -- I deleted my account earlier in the year in dismay at their tweets about J.K. Rowling -- but in November I always write novels, and that didn't change. This year, I finished two novels off, Rolnikov the God, which I began writing in November 2019, and We Slept Through the Apocalypse, which I began back in November 2008. Finishing a book on which I'd been stuck for so long made me very happy, and that means I've now finished writing eleven of these daft novels. I think I'm going to keep going, and see if I can finish a few more, after catching up on my book reviews.

Anyway, for my own future reference as much as anyone else's interest, here are a few of the things that worked for me this month, roughly in order of where they came in the writing process:

Leaving Twitter and Facebook. I left Twitter and Facebook at the beginning of November and stayed off completely until I had finished a novel. To be honest, I wish I had stayed off until I had finished both novels. It's not just reading the posts on social media that is a drag on concentration -- though Twitter especially does offer a never-ending succession of interesting people with interesting thoughts -- it's writing my own posts, and then thinking about the responses to my posts, and then thinking about how to respond to those responses. I spent an entire week earlier this year arguing about the canonical sexuality of Velma from Scooby-Doo, for example. All thinking time better invested in the novels. I've become a big fan of just reading Twitter on the television, via the Fire TV stick, not logged in. It becomes like reading a newspaper then, much more enjoyable, with no sense of an obligation to respond to anything.

Moleskine squared cahiers. I love these. I've been using them for a few years now. I have one for each novel. I draw a front cover and write a blurb for the back cover, both of which help keep me focused on what the book is supposed to be about. The first few double-page spreads are for brainstorms, character lists, maps, mysteries that need to be resolved, and other things I need to remember. Then each chapter gets a double-page spread. On the left-hand pages go the things that are supposed to happen in that chapter, and on the right go the things that did actually happen, if different. It's so useful having my notes in these self-contained little booklets. I can take them anywhere, and they make it immensely easier to resume writing an unfinished book. I've just ordered another set of three, to help me finish off The Mysteries of Mygret Zend, The Triumphs of the Two Husbands and I Couldn't See Past the Spider. 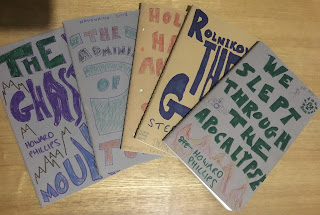 Routine. I got into a very nice routine this year, helped, I have to admit, by one of our children having to quarantine in her room after being in close contact with a Covid-19 carrier. (Don't worry, both children seem to be fine.) That meant I didn't have to get up early with her, and also that the other daughter was sleeping on the sofa, so I couldn't play on the Xbox after half nine or so. Every night I would go in my office between nine and ten, start writing, and carry on till that chapter was done. I like writing in the mornings too, but that's a bit harder without a pub to go to, and if I don't get a chapter done in the morning it can be a drag on the whole day. 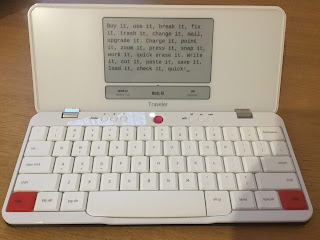 Alexa. I set up a routine on Alexa called Novel writing, with music. It tells me to write a hundred words, then plays a long, wordless song for seven and a half minutes, which is usually more than enough for me to write a hundred words. Then it tells me to aim for two hundred words and plays another long, wordless song, and so on until I reach my target of 1666 words for the day and the chapter. It's like putting myself on a train track. Once I'm on, I can't get off, I just have to keep going till I reach the station. 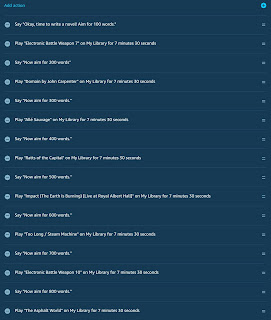 Hundred-word chunks. It's hard to write 1666 words, but it's easy to write 100. I marked each 100 words off with a cross on that chapter's page of the cahier.

Treats. Each 100 words earned me a treat. I'm getting a bit sick of Haribos at this point, but I finished two novels so they seem to have done the trick!

Playing cards. After each 100 words I also get to turn over a playing card. (I do the same thing with proofreading, where I turn over a playing card for each page read.) This acts as a surprise and a treat, but I think it also provides a physical manifestation of progress through a project that you don't get when writing or reading digitally. I have various sets of playing cards that I use (Doctor Who, James Bond, Star Wars, Judge Dredd, etc), but this year I mainly used a (possibly unlicensed) set that featured paintings of Tarzan, John Carter, Game of Thrones and Vampirella.

The Kindle. I have things set up so that when I finish the chapter, and press the SEND button on my Freewrite, it gets automatically forwarded to my Kindle. It was such a pleasure to go to bed each night knowing that I would have a new chapter of my own novels to read! I wouldn't recommend them to anyone else, but I find them hilarious. I would annotate the chapter while reading, then in the morning take in those corrections to the text file. It was good preparation for writing the next chapter, but also meant the novels were in pretty good shape by the time I finished writing them. Expect to see them in future issues of TQF!

Not reading anything else. I didn't read other books this month. I got that out of my system in October! I read the new chapters of my books, and the old chapters of those books, and chapters of other books I've written about the same characters. That meant I was constantly refreshing my memory of their lives, and noticing details I could work back into the story. It also meant that I didn't get drawn into thinking about other people's plots instead of mine, or get distracted by writing book reviews instead of fiction.