Vampires vs. the Bronx | review by Douglas J. Ogurek 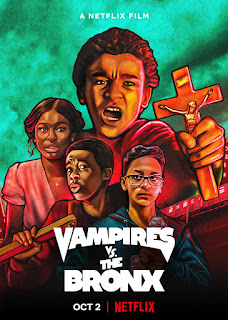 Kids find out vampires are trying to take over their neighbourhood. Adults don’t believe it. And so a familiar scenario plays out in Vampires vs. the Bronx, directed by Oz Rodriguez. Lots of clichés in this one: hissing, baring teeth, gathering weapons, taking notes from movies. However, one thing does set this film apart from other vamp flicks: the predators use the guise of a real estate firm to pursue their malicious goal. They even go so far as to enlist some of the neighbourhood thugs to help them.

All kinds of “coming soon” signs hang on vacant buildings in Miguel/Lil Mayor’s (Jaden Michael) Bronx neighbourhood. The signs advertise upscale restaurants and high-end retailers – The Butter Shop, for instance – that don’t exactly fit the vibe of this minority community. Another thing the signs have in common is Marnau Properties’ wicked gothic font logo.

Meanwhile, Miguel is on a quest to “Save the Bodega,” a convenience store that doubles as a hangout where kids can do homework or play video games. Miguel and friends soon discover the true identities of Marnau Properties’ employees. Here’s a hint: they dress in black and they only come out at night.

These all-white vampires are stand-ins for the greedy developers that enter urban neighbourhoods and snatch up as many properties as possible. Out go the low-income minorities. In come the high-earning whites. Bloodsuckers, indeed.

At a couple points in the film, characters allude to the Bronx being essentially cut off from the rest of the world. Both locals and invaders suggest that if any residents went missing, nobody would really care.

Miguel, a good boy whose mother repeatedly embarrasses him, is the unspoken leader of the trio. Luis (Gregory Diaz IV) is a Puerto Rican (and less crude) version of Richie (Finn Wolfhard) from It. Luis even reads Stephen King (i.e. Salem’s Lot, of course) and, interestingly, wears a Slayer T-shirt at one point. The other member of the trio is Bobby (Gerald Jones III), a black boy who is on the brink of getting seduced into violence by older gangbangers.

One irksome element of Vampires vs. the Bronx is a young lady who periodically enters the scene to comment on neighbourhood developments via live stream on a social media channel. This was also an annoyance in Adam Sandler’s recent Hubie Halloween.

Vampires vs. the Bronx is cute and funny at times, although highly derivative.—Douglas J. Ogurek ***