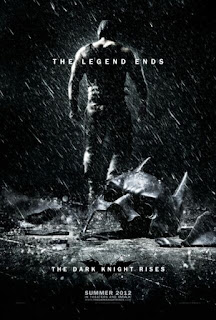 Christopher Nolan’s The Dark Knight Rises (2012) is the third instalment of his Dark Knight Trilogy, which began with the unimaginatively-named Batman Begins in 2005.  The latter title was selected to indicate that Nolan’s trilogy is a reboot, starting the story afresh after Warner Brothers’ initial film series ended with its fourth instalment, Joel Schumacher’s Batman & Robin (1997), which was very poorly received by critics.  As the title of the Trilogy suggests, Nolan wanted to return to the hardboiled realism of Frank Miller, Klaus Jackson, and Lynn Varley’s The Dark Knight Returns (1986) rather than continue the comedy that Schumacher brought to Batman Forever (1995) and Batman & Robin, which was reminiscent of the camp humour that popularised ABC’s Batman (1966–1968) television series.  Batman Begins finds millionaire Bruce Wayne (played by Christian Bale) setting out to train himself as an outlaw in order to return to Gotham (a fictionalised New York) and perform the role of a law enforcer – against the threat of organised crime – a role that the corrupt police department cannot fulfil.  In Bhutan, he is trained by the League of Shadows, which initially appears to be a monastic order but is subsequently revealed as a kind of Hegel-inspired insurgency that has existed for centuries and shapes world history by destroying civilizations when they become too decadent.  Wayne escapes when he learns that Gotham has been selected as the League’s next target and returns to save the city from organised crime as Batman, with the benefit of his physical and mental training at the hands of the League and the technology produced by Wayne Enterprises.

As Batman combats both organised crime and the corrupt police department, the public demonstrates an ambivalent attitude towards him, somewhere in between friend and foe.  When he delivers Gotham from a biological attack by the League, he is acknowledged as a saviour and the film finishes with the newly-promoted and incorruptible Lieutenant Jim Gordon (played by Gary Oldman) establishing Batman as Gotham’s guardian angel by means of the Bat-Signal.  The Dark Knight (2008) sees Batman pitted against the Joker (played by Heath Ledger), who terrorises Gotham using a trademark combination of hyper-violence, complex planning, and lack of regard for the safety of either himself or his henchmen.  The Joker succeeds in turning the citizens of Gotham against Batman and when Batman decides to accept responsibility for murders committed by District Attorney Harvey Dent (played by Aaron Eckhart) in his guise of Two-Face, he makes the transition from hero to villain.  The Dark Knight Rises begins eight years later, with Gordon as police commissioner, organised crime in Gotham all but eliminated courtesy of the extra enforcement powers bestowed by the Dent Act, Batman as an outlaw, and Wayne living as a recluse, disabled by his exertions against the League, the Joker, and Two-Face.  Meanwhile, Bane (played by Tom Hardy), a mercenary captain who was expelled from the League of Shadows for his extremism, kidnaps a nuclear physicist and establishes a base in Gotham’s sewers.

The plot of The Dark Knight Rises draws on Miller, Jackson, and Varley’s The Dark Knight Returns as well as two other Batman storylines: Jim Starlin, Bernie Wrightson, and Bill Wray’s Batman: The Cult (1991) and Chuck Dixon, Jo Duffy, Alan Grant, Dennis O'Neil, and Doug Moench’s Batman: Knightfall (1993–1995).  Although organised crime has been destroyed and at least some of Gotham’s financial elite persuaded to invest in the city’s welfare, large numbers of homeless people live in the sewers, turning Bane’s mercenary band into a small army of the discontented.  When this army is discovered and Gordon injured, Officer John Blake (played by Joseph Gordon-Levitt) goes to Wayne for help and Wayne employs new technology to overcome his disability and return to the role of Batman, albeit still as an outlaw.  His return is for the specific purpose of saving Gotham from Bane, who is determined to complete the League’s final mission, the destruction of Gotham.  Bane defeats Batman in single combat and sends him to the prison where Bane was born, an anonymous pit in an undisclosed country.  He then lures most of the police department into the sewers and traps them there.  As befits his name, Bane has planned a twofold destruction for Gotham.  He empties Gotham’s prisons and takes over the city with his army of mercenaries, the homeless, and convicts, creating a Reign of Terror by the formerly disenfranchised.  At the same time, he activates a nuclear bomb that will destroy Gotham in five months, telling the citizenry that it is simply the instrument of their liberation, i.e. a nuclear deterrent is required to save the city from outside interference by the US military.  Bane’s real motivation is to prolong the destruction of Gotham, but the interim period provides some kind of communist experiment in which the capitalist order is inverted, a city run by the poor for the poor with the rich pushed to the margins, forced into hiding to escape victimhood.  The final act of the narrative – and indeed the Trilogy taken as a whole – begins with Batman’s escape from prison to take on Bane for a second time.

Bane’s Gotham is framed by Nolan as a worse option than either the laissez-faire metropolis of Batman Begins or the security state of The Dark Knight.  The Dark Knight Rises presents a mirror image of the situation in Batman Begins.  In the latter, Gotham is administered by a wealthy elite and a corrupt police department, both of whom are in league with organised crime.  In order to become a (true) law enforcer, Batman must oppose the (official) law enforcers.  In The Dark Knight Rises, Bane’s communist experiment has turned the former law enforcers into outlaws and the former outlaws into law enforcers so that Batman recovers his status as law enforcer by opposing the (new) law enforcers once again.  What is particularly interesting about Batman’s repeated role changes in the Trilogy – from friend or foe to friend to foe and then finally back to friend – is the perspective they offer on Gotham’s employment of mass incarceration.  The full scope of incarceration (and homelessness) is only revealed when Bane arrives in Gotham, transforming his mercenary band into an army by emptying the prisons (and feeding the homeless).  In reality, the US has over two million of its three hundred and twenty-seven million population behind bars and double that under community supervision – by far the highest proportion in the world.  Nolan provides a comprehensive perspective on mass incarceration through Batman, who begins the Trilogy by filling up Gotham’s prisons and is then incarcerated in Bane’s prison himself.  Batman’s reversal of fortune does not cause him to reflect on the effectiveness or efficiency of custodial sentencing, however, but simply creates an urgency for escape, the pressing need to return to Gotham and put the criminals back in prison (and the homeless back in the sewers).  This is a missed opportunity by Nolan – a deliberate omission that reinforces the directorial perspective from which mass incarceration and other hyper-punitive measures are represented in the narrative.

In Batman Begins, Batman is sensitive to the poverty and inequality in Gotham as well as to the pernicious influence of organised crime, but The Dark Knight replaces concern with welfare with concerns about security and the need to increase police powers to combat the threat of the Joker.  The question of social security and economic inequality is not raised again in The Dark Knight Rises and Nolan frames Bane as an unproblematic supervillain, secretly undertaking Gotham’s destruction (with the nuclear bomb) while inflicting the chaos of self-rule on the populace in the remaining months.  The destruction that Bane brings to Gotham provides an unambiguous endorsement of the measures used to prevent that destruction – the mass incarceration of the population and ubiquitous poverty – and Batman’s goal is the restoration of pre-revolutionary Gotham.  This callous and callow conclusion to the Trilogy seems to confirm the view that Batman is just a rich white bloke beating up the poor and mentally ill, captured concisely by Dare Obasanjo in a tweet last year: ‘It’s like Bill Gates focusing his money on beating up junkies in Seattle.’  The problem with Nolan’s reboot is that one doesn’t have to have ‘snowflake’ sensitivity to realise this.  The moral of the story, the message thinly-veiled in the cinematic medium, is completely clear, conveyed with very little subtlety.  Nolan's Gotham needs extrajudicial methods to prevent it collapsing into chaos and mass incarceration and ubiquitous poverty are simply necessary evils required to prevent the destruction of life as we know it.  It is not difficult to see Batman’s shadow behind Trump, his very own guardian angel, or perhaps even a younger, trimmer Trump in the Bat-Suit himself. ***