The Devil, by Ken Bruen | review by Rafe McGregor 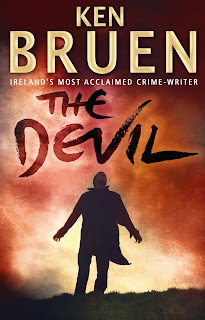 I first came to Ken Bruen in 2002.  I was researching for a military police procedural series that I hoped would launch a writing career and was reading or watching every mystery with a military setting I could find.  I read a review of The Guards (2001), the first Jack Taylor novel, and because either the review or my concentration were lacking came away with the impression that it was about a murder in a London barracks.  Not even close – it’s actually about an alcoholic ex-guard (Irish police officer) who works as a private investigator in Galway, a small city on the west coast of Ireland.  I devoured it anyway and immediately sought out the second in the series, The Killing of the Tinkers (2002), which had just been published and which I read in a single sitting.  Like his protagonist, Bruen has suffered from addiction and his no-holds-barred noir fiction is nothing short of addictive itself – extremely difficult to stop once one starts, even if one later wonders if it was the wisest use of one’s time.  While I was waiting for the third Jack Taylor, The Magdalen Martyrs (2003), to be released, I got stuck into Bruen’s Detective Sergeant Brant series, police procedurals set in south-east London: A White Arrest (1998), Taming the Alien (1999), The McDead (2000), and Blitz (2002).  I also read two excellent standalones, The Hackman Blues (1997) and London Boulevard (2001).  The fourth Jack Taylor, The Dramatist (2004), won the Shamus Award, but it was at this stage that my appetite for Bruen started to wane.  First, there was simply too much personal tragedy in The Dramatist and too little mystery for my taste.  Second, it was at about this time that I realised The Magdalen Martyrs, which I had also loved, was essentially an inferior retelling of London Boulevard (which is an adaptation of Billy Wilder’s 1950 film, Sunset Boulevard).  I read the next three Jack Taylors and Brants with a strong sense of diminishing returns and gave up in 2008 with Sanctuary (the seventh Jack Taylor; the Brant series ended with Ammunition, published the previous year) and Once Were Cops, a disappointing standalone.

One of my problems with both the Jack Taylor and Brant series is that all of Bruen’s characters are not only deeply flawed, but seriously self-destructive.  In consequence, their lifestyles soon take tolls on their physical and mental health, which is not conducive to a lengthy series without some authorial innovation.  Taylor, for example, has most of his teeth knocked out and is left with a permanent limp by the end of The Killing of the Tinkers, adds Class A drug addiction to his alcoholism in The Magdalen Martyrs, and is deaf in one ear by the time I left him in Sanctuary.  Which is not to say that he can’t still be a detective – Cormoran Strike is missing half of one leg before J.K. Rowling’s wonderful Strike and Ellacott series even starts – but that Bruen adjusts neither the style nor the substance of the stories as the series progresses.  Taylor is still trying to be an Irish Philip Marlowe, but is increasingly unable to imitate him with conviction as his physical capacities deteriorate.  On reflection, I think Bruen is best suited to the standalone and that his best work is a set of three noir thrillers themed around different poets: Rilke on Black (1996), Her Last Call to Louis MacNeice (1998), and Dispatching Baudelaire (2004).  There is something about the way in which he combines poetry and noir in both his form and content that makes these novellas exceptional and it’s such a shame that they are all out of print.

In spite of my unfaithfulness, I was delighted when Bruen hit the big time two years after I stopped reading him.  In 2010 (the year in which The Devil was published in hardback) the Jack Taylor series was released as a television series of the same name by TV3 Ireland, with Iain Glen in the title role, and London Boulevard was released by Entertainment Film Distributors as a feature film directed by William Monahan and starring Colin Farrell, Keira Knightley, Ray Winstone, and Ben Chaplin.  The following year the fourth and best Brant – Blitz – was released as a feature film by Lionsgate, directed by Elliot Lester and starring Jason Statham and Paddy Considine.  A second season of Jack Taylor was screened in 2013, a third in 2016, and a fourth is currently in production.  Blitz is pretty much what one would expect from a Statham vehicle, which is not necessarily a criticism, but London Boulevard is one of the most underrated crime films of the twenty-first century, perhaps of all time, with outstanding performances from both Farrell and Knightley.  As such, Bruen’s critical success has finally been matched by commercial success and the Jack Taylor series is currently on its fifteenth instalment, Galway Girl, which was published in 2019.  I decided to return to Bruen because of my interest in occult detective fiction, reading in reviews that I attended to more carefully than in 2002 that the supernatural elements of The Devil made it Bruen’s ‘marmite’ novel, meaning that it polarised fans of the series (though apparently didn’t do his sales any harm.)

The novel opens with Taylor at Shannon Airport, attempting to fulfil one of his long-term ambitions by emigrating to the US.  He has exchanged some but not all of his previous addictions for Xanax and is managing to keep a lid on his alcoholism.  When he is refused entry to the US, he nonetheless heads straight for the airport bar, where he is joined by a mysterious ‘Kurt’.  One of the airline staff tells Taylor that Kurt has been following him ever since he arrived at the airport and she subsequently dies in suspicious circumstances.  Several reviewers have made much of this prologue and three chapters in which Bruen uses third person omniscient narration instead of his usual first person from Taylor’s point of view.  If one applies Occam’s razor to one’s literary criticism – the principle that the simplest solution is usually the right one – there is nothing to suggest that Kurt, who also calls himself Mr K and Carl, is anything other than a very dangerous psychopath.  Taylor is Galway’s most famous (if not most successful) private investigator so it is little wonder that a serial killer seeking attention would stalk him.  When Taylor returns to Galway he is hired to find a missing student, who becomes Kurt’s second victim.  The shape the story takes as a work of crime fiction is not the whodunnit – we know Kurt dunnit from the prologue – but the howdunnit, with the suspense created by the question of if and how Taylor will catch or kill him.

In chapters nineteen to twenty-one (of twenty-three), the howdunnit suspense is intensified by Taylor’s self-confessed unreliable narration (regarding what actually happened to Sawyer, the meeting with Father Ralph, and the purchase of the Zippo).  By the time the narrative reaches its climax – the confrontation between Kurt and Taylor – Kurt has killed six people and Bruen has suggested three possibilities as to his identity.  The first and most likely is that Kurt is a serial killer pretending to be the Devil who has, in consequence of his personal magnetism, acquired a small cult following.  In order for this solution to be plausible he would also have to have some command of magic (the art of illusion rather than genuine occult power) and to research his victims carefully, neither of which would be out of character.  The second and third possibilities are that Kurt is either a man who has been possessed by the Devil or is the actual Devil incarnate on Earth.  Whipping out Occam’s razor again, there is no compelling evidence for the existence of the supernatural until the final chapter, which is deliberately – deliciously, perhaps – ambiguous.  The eleventh-hour twist (often, but not always, including a reversal of fortune for the protagonist) is a trademark of Bruen’s narratives and in this instance the last chapter is discontinuous with the rest of the novel.  Keeping one’s razor stropped, I think the answer is to read that chapter and that chapter alone as a case of unreported unreliable narration, too much Xanax, a post-traumatic breakdown, or some combination of the three.  Others might prefer to take the conclusion as retrospectively infusing the occult into the rest of the narrative and, in truth, there is little to choose between the two interpretations.

Bruen provides a metafictional clue as to his intent, but it is just as ambiguous as the conclusion.  In chapter twenty-one, Taylor recalls a conversation with a man from years before, who told him: ‘It’s known as horror.  Occult fiction, I call it the Further-Out genre, like in David Lynch movies.  You’re in the middle of a crime story.  But then the camera finds, say, a painting.  Pushes into it.  Turns a corner into the realm of the metaphysical.  Which, in the sense of the real origins of suspense, might actually take us closer than men with guns ever could.’  Is The Devil noir fiction with occult misdirection or Bruen’s first stab at further-out fiction?  Either interpretation is valid, but I think I’ll give the last word to another Irish crime fiction writer, Declan Burke.  In his review of The Devil, he writes that everything ‘that happens in (all the) Taylor narratives are subordinate to the needs of Taylor himself.’  Taylor, according to Burke, combines both self-loathing and narcissism in equal measures and that is why, while I thoroughly enjoyed my return to Taylor’s world, I also remembered why immersing oneself in that world becomes tedious if indulged too long or too often.