The Testaments, by Margaret Atwood (Nan A. Talese) | Review by Douglas J. Ogurek 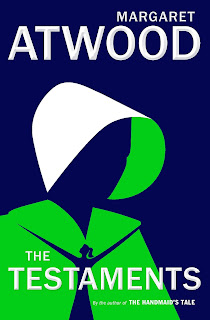 The sequel to the Handmaid’s Tale. Incendiaries, intrigue, and insurrection: finding the female voice in a world “where women might as well be house cats”.

What kind of place relegates women to groups with names like Econowives, Marthas, Handmaids, Pearl Girls, and Unwomen? Where might one see a Particicution in which normally meek and submissive women grow enraged and literally tear apart men convicted of crimes? Gilead, of course… the fictional setting of Margaret Atwood’s The Testaments.

The novel’s action takes place 15 years after that in Atwood’s groundbreaking near-future sci-fi opus The Handmaid’s Tale, written 35 years ago. When the sequel opens, the Republic of Gilead, located within the northeastern US, appears to be thriving with its strict rules and severely hierarchical structure. However, “beneath its outer shell of virtue and purity,” points out Agnes Jemima, “Gilead was rotting.”

The story unfolds from the perspectives of three characters. Agnes is a girl coming of age in Gilead. She is selfless and grateful if naïve. Like many of her peers, she does not want to be married off to an older man, yet that is priority number one for her new stepmother.

Daisy, a girl living in Canada, understands the unfairness within Gilead, where “women might as well be house cats and everyone [is] a religious maniac”. She undergoes a family tragedy and later discovers a connection to Gilead. The contrast between the girls’ viewpoints, one influenced by lifelong membership in a cult and the other shaped by a world similar to our own, offers plenty of fodder for how one’s environment guides one’s world view.

Aunt Lydia, the third and most compelling character, has used her wiles to ascend to the top female position within Gilead, of which she is a founding member. Her status as Aunt means that she does not have children, is not married, and lives in Ardua Hall – no men allowed here – with the other Aunts, all of them intent on helping keep Gilead’s women in line.

Agnes and Daisy’s narrations are presented as “transcripts of witness testimony”, whereas Aunt Lydia’s narration is referred to as a “holograph” that has been hidden within Ardua Hall’s library. In the audiobook version, Atwood herself participates, fortunately only to read the chapter titles – each time she speaks, she sounds as if she’s about to fall asleep.

For years, Gilead has been trying to locate Baby Nicole, whose mother escaped with her. This child, “practically a saint in Gilead”, is a symbol of hope for the republic. To complicate matters, someone within Gilead wants to bring down the entire regime. This person is in cahoots with a secret group called Mayday, which helps people, particularly females, escape the shackles of Gilead and start life anew.

The tension grows as both Agnes and Daisy discover things about themselves and confront increasingly dangerous circumstances. All the while, Aunt Lydia manipulates people into getting her way.

The Testaments showcases Atwood’s versatility. As the story shifts between the three narrators, the reader gets immersed in what could be three different novels. Daisy’s story, full of intrigue and the discovery of a greater purpose, has the feel of a young adult novel. Conversely, Agnes, as she comes to understand the shortcomings of a society in which women are scapegoats, typifies the likeable protagonist in a cult story. Aunt Lydia’s machinations summon a Shakespearean drama. Then there is the unorthodox conclusion, which takes place as a lecture in the late 22nd century.

The central theme in The Testaments is, not surprisingly, the oppression and emergence of women. This staggeringly hierarchical society forbids girls to read and breeds them to be submissive wives. The female’s greatest use, according to Gilead, is her ability to have children.

In this culture of arranged marriages, it is not uncommon for older men to wed girls in their early teens, then dispose of them if they get tired of them. Commander Judd, a top dog in the Gilead pyramid, has had a series of young wives, all of whom have come to untimely ends. Women in Gilead live in fear that at any moment, they could be snatched away or have their lives completely upended. It’s all based on the whims of men.

And who’s at fault? The women, of course. Agnes talks about being unable to go on a swing because it might entice the males to look up her skirt. It’s as if the men are wild animals and the women are encouraged not to carry open foods.

If women do not have children, they have little value in Gilead. How much does this mindset translate to contemporary America, where girls who say they don’t want children are told, “You’ll change your mind” and women who elect not to have children are labeled “selfish”.

Agnes Jemima can only wear pink, white, or plum dresses. How apparent will those same colors be if one takes a stroll down the girls’ toy aisle in the local store?

A favorite passage in this novel involves Aunt Lydia directly addressing the (presumed female) reader. She implies that women can be so much more than just a receptacle and a caretaker. – Douglas J. Ogurek *****