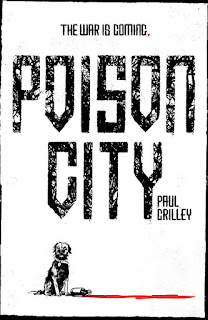 I’ll begin this review with a confession: for idiosyncratic reasons in which the readers of Theaker’s Quarterly Fiction will have no interest, I have a soft spot for police procedurals set in Durban, South Africa’s ‘third city’ (after Johannesburg and Cape Town).  As far as I know, Poison City is the only police procedural set there aside from my own novella, The Secret Policeman (2008).  In consequence, I may have approached this novel in a less critical frame of mind than usual.  Having said that, this is not Durban as I or anyone else who has ever lived there knows it.  Scottish author Paul Crilley invites his readers to imagine a world similar to that of Neil Gaiman’s American Gods (2001), in which every legend, myth, cult, and religion ever invented by humanity is true and in which the orisha – these supernatural beings – all exist.  The difference between Crilley’s and Gaiman’s fictional worlds is twofold: first, Crilley is not afraid to confront the monotheistic religions and his God is simply another orisha, albeit one of the most powerful; second, the orisha are free to migrate where and when they wish rather than being reliant on humanity for their transportation and have accordingly dispersed across the globe.  A world where human and orisha live side-by-side requires a special police force and an international organisation of police officers along the lines of the International Criminal Police Organization (Interpol) exists precisely for this purpose.  These Supernatural Divisions are part of the regular police forces of each country, clandestine units with obscure names run from secret headquarters whose primary purpose is to serve as peacekeepers, enforcing the Covenant, an ancient truce between humanity and orisha.  In South Africa, the Supernatural Division is called Delphic Division (DD), is part of the official Occult Related Crimes Unit of the South African Police Services (SAPS), and is based in Durban.  DD is nominally under the command of Divisional Commissioner Ranson, a political appointment, but actually run by Major Olivia Armitage, an Englishwoman in her fifties, and her senior investigator is Lieutenant Gideon Tau.

Tau is the protagonist of a novel that merges the genres of occult detective, police procedural, and urban fantasy.  He is a Londoner who served in the Metropolitan Police Service, resigned for undisclosed reasons, and worked as a private investigator in Los Angeles before moving to South Africa and joining the SAPS.  Tau is no stranger to personal tragedy, with his father committing suicide when Tau was twelve and his daughter murdered three years before the narrative opens.  His wife left him after the loss of their child and he lives with his spirit guide, an alcoholic dog who has neither a name nor a breed, in a one bedroomed-flat just off the Golden Mile, the four-mile stretch of beach that constitutes Durban’s main tourist attraction.  He has a fondness for designer suits, mobile phones, and whisky, a fear of heights, and drives a beaten-up old Land Rover.  Tau is known as “London” or “London Town” to his colleagues and was recruited to DD by Armitage, who has become something of a mother figure to him.  Tau has ‘second sight’, the ability to see orisha in their true form and is a conjurer, i.e. able to use Shinecraft, like all of his colleagues at DD (some of whom are human, others orisha).  New recruits to DD are given a bone wand to assist their conjuring and a spirit guide as a mentor for the duration of their probationary period, by the end of which they are expected to have specialised in and mastered a particular branch of Shinecraft.  Tau has been in DD for five years, but failed to specialise – a literal jack of all trades and master of none – which is why he retains both the wand and the dog.  In addition, he has two Chinese dragons tattooed on his back and limited mastery of Sak yat, Chinese tattoo magic.  In the finest tradition of the occult detective, Tau must battle both human and orisha enemies, and like his more conventional police colleagues in South Africa, is heavily-armed for a typical tour of duty, with the wand, a magical silver dagger, a Glock 17 semiautomatic pistol, and a shotgun.

Crilley employs first-person narration by his protagonist, a convention popular in hardboiled detective stories, but writes in the present tense instead of the more common past tense.  I am not sure why he employs this device as it serves no obvious purpose, but it is used skilfully and he avoids the main pitfall of present tense narration, distracting the reader.  The novel is divided into twenty-four chapters and the first twenty-three take place over a single week, Sunday to Sunday in late November in a year that is presumably contemporary with the year of publication (or perhaps the previous year).  The first two chapters serve the dual purpose of introducing Tau and his world and immersing the reader in an exciting action set piece.  The plot begins in the next, but it is supervenient upon a particular complex sequence of events.  Lilith – Adam’s first wife, ‘First Mother of the Illium’, ‘Mother of the Watchers’, ‘The First Ruler of Eden’, and apparently Empress of the Vampires – has come to the decision that the Covenant is not in the interests of the orisha.  The Covenant prevents an apocalyptic war between the orisha and humanity, but over the last three hundred millennia it has facilitated the overpopulation of the earth by humanity and the reversal of Lilith’s preferred status quo, in which the orisha were the dominant species.  She plans to destroy humanity – or at least the majority of humanity – by means of sin, exploiting the for the most part secret practice of sin-eating.  Sin-eaters can be both orisha and human and can eat the sins of either species.  The way the process works is that a being who feels guilty about a sin they have committed consults a sin-eater, who eats their sin for a price, removing all memory of it.  The sin-eater does more than this, however: ‘“See, the sins are not just sins.  They hold memories and feelings.  Everything associated with where and when the sin took place.  The sin-eater takes all that into his very soul when he takes on a sin.”’  As such, sin-eaters have become a valuable resource and created a global corporation.  No sin ever disappears so before a sin-eater dies he or she must pass on their sins to their apprentice, otherwise the sins will return to those who committed them.  This has made sin-eaters not only a valuable resource, but sources of vast amounts of information.  Many human beings in the upper echelons of the financial, social, and political elite have taken advantage of the corporation’s services, contracting their own sin-eaters and attending the annual sin party, an orgy of violent and sexual harm, all physical and mental evidence of which is erased by the hosts by the following morning.  Crilley’s conceit presumes, of course, that the dominant emotion felt by members of the elite who perpetrate harm is guilt rather than, for example, satisfaction or pride, which is open to question, but the internal logic of his fictional world is entirely consistent.

The third chapter of Poison City ends with Armitage and Tau being called to the scene of a murder.  The victim, Jengo Dhlamini, is a ramanga (a low-level vampire) who is subsequently revealed to be a sin-eater and whose soul contains knowledge of the Sinwalker, the first sin-eater, who ate God’s sins and can only continue to contain them by sleeping.  Dhlamini was killed by a sin-eater working for Lilith, but his death proved useless as he had taken the precaution of hiding his soul.  When Lilith’s sin-eater fails to acquire the soul by committing a second murder, she captures Tau, who manages to escape.  Lilith’s sin-eater commits a third murder, but once again fails to acquire either the soul or the knowledge it contains.  The pace of the investigation – and the personal and public stakes – pick up when Tau discovers the existence of the corporation and the crescendo and climax of the narrative are planned and executed to perfection by Crilley.  Poison City is the first in the Delphic Division series, which follows Tau’s investigations and adventures in the occult.  Unfortunately the second, Clockwork City (published by Hodder & Stoughton in 2017), is a disappointment, replacing the murder mystery plot with a caper story that just doesn’t work.  At the time of writing there is no third novel on the horizon so we may have seen the last of Tau.  That’s a pity because aside from my interest in Poison City’s setting, Crilley has created a charismatic character with a rich and intriguing past that might have taken his readers to other locations in South Africa, Los Angeles, or beyond in future instalments.