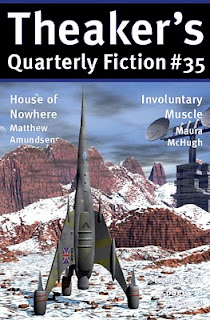 Feeling hopeless about 2011? Here’s Theaker’s Quarterly Fiction #35, 96 pages of fiction and reviews, to wash away your pain with the pain of others. “Involuntary Muscle” by Black Static contributor Maura McHugh tells of Lilly, her unhappy life made more miserable yet by surprising news. “House of Nowhere”, a novella by Matthew Amundsen, concerns brave Hully Bo, trapped in a submerged house and tortured by the mean and mysterious Conjurer.

We then have reviews of books by Justin Isis, Brendan Connell, Lucius Shepard, Johnny Mains, André Gide, Kevin Anderson and Sam Stall, Scott Edelman and Kristine Ong Muslim, and of the latest instalments of Doctor Who and Harry Potter. In the comics section we take a look at Clint #4, the wonderfully wordy Showcase Presents DC Comics Presents Superman Team-Ups, Vol. 1, and Strangers: Homicron.

The seasonal cover is by lovely Howard Watts.

Available in all the usual formats, all free except the print edition, which we’ve priced as cheaply as possible:
Here are the magnificent people who made this issue possible:

Matthew Amundsen’s stories have been published in The Harrow, Millennium SF&F, Zygote in My Coffee, Starsong, and others. He has also published extensive music criticism for brainwashed.com and various print publications. Over the years, he has worked in film, television, and photography while living in New York, Atlanta, and Minneapolis. He now lives in Knoxville, Tennessee, where he continues to write as well as record and perform experimental music as Surface Hoar.

John Greenwood is the co-editor of Theaker’s Quarterly Fiction, as well as its most frequent contributor. His blog on rare and unusual books can be found at http://oxfambooksandmusicmoseley.blogspot.com. In this issue he reviews I Wonder What Human Flesh Tastes Like and A Roomful of Machines.

Maura McHugh was born in the USA but was transplanted to Ireland when too young to protest. Her short stories and poetry have appeared in publications in the USA and the UK such as Fantasy, Shroud Magazine, Black Static, Goblin Fruit, M-Brane SF and Year’s Best Dark Fantasy and Horror 2010. In 2009 her script, “Hotel Training”, was shot and premiered as part of the Hotel Darklight anthology film. She also co-juried/edited The Campaign for Real Fear horror story competition with author Christopher Fowler. In the coming months Atomic Diner will publish the graphic novel Róisín Dubh, for which Maura wrote the scripts.

Douglas Ogurek’s Roman Catholic faith and love of animals strongly influence his work. He lives in Gurnee, Illinois with his wife and their pets. To this issue he contributes a review of the latest Harry Potter film. To TQF33 he contributed the astonishing “NON”.

Stephen Theaker is the eponymous editor of Theaker’s Quarterly Fiction, and writes many of its reviews. His reviews have also appeared in Prism and Black Static. He wishes you all a happy new year.

Howard Watts is an artist from Brighton. He has previously provided covers for Pantechnicon, Dark Horizons and TQF, and for this issue as well as supplying the cover he has written a review of the Doctor Who Christmas Special.

Next issue due March 27!
Posted by Stephen Theaker