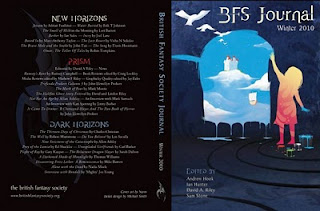 The first issue of the new BFS Journal has been going out to members this week. If you're not a member, I believe there are a few copies in reserve, but join quickly or it'll be gone for good!

I'd been writing up to a quarter of some recent issues of Prism, but there's not as much as usual by me in this first combined publication; a combination of the deadline jumping forward and a bit of doubt about whether reviews would appear in the journal at all. But pages 93 to 97 of the journal are by me – all the dull BFS news! – and page 130, a review of Doctor Who: City of Spires.

Pages 62 to 87 print the runner-up and winner of the BFS Short Story Competition 2010, which I organised – "The Song" by Travis Heermann and "Omar, The Teller of Tales" by Robin Tompkins – but because of the way the competition works I haven't actually read them yet: I'm looking forward to that.

The journal certainly looks nice – unsurprisingly, if you spend twice as much on a publication, it looks twice as good! – but structurally it needs some work. It feels like three different publications stuck together between hard covers, which is exactly what it is. Giving the sections of a journal issue numbers seems redundant: we've already had a Dark Horizons #57, for one thing!

The next issue should be much better in that regard, this one having been pulled together in a rush. There's a lot of potential: once it settles down, and drops the pretence that it's three magazines rather than one, I think it will be very impressive. It's very handsome, nicely designed, and the full-page artwork looks brilliant. It feels very laid-back.

I haven't read much of it yet, but in Prism it seems very odd that David Riley has chosen to publish his review of Wine and Rank Poison under a pseudonym (or at least that's what I assumed – the comments are very similar to those made on his blog and on forums, and Ian Redfern is a pseudonym he's used in the past), but uses his own name for more positive reviews.

He's explained on the BFS forums that it was someone else using his pseudonym, making it an anonymous review, in which case it should have been printed as such (or not, which I think would be the decision of most editors), rather than being printed under a pseudonym to give it the cloak of respectability.

Giving books bad reviews isn't pleasant, and giving bad reviews to books by people you know is even worse, but if the reviewer doesn't respect their own opinions enough to stand by them, why would anyone else respect them? A grave misjudgment there by both reviewer and editor, if indeed they aren't one and the same.

On a more positive note, I enjoyed the interview with Kari Sperring – reading Living With Ghosts I was strongly reminded of Dumas, in particular La Reine Margot, by its images of people wandering through the streets of a city in chaos. I had no idea she was actually a Dumas scholar. Score one for me!

Six whole pages are given over to reprinting this ramble from Des Lewis's blog, which I expected to be annoyed by, but it worked very well in the context of a journal.