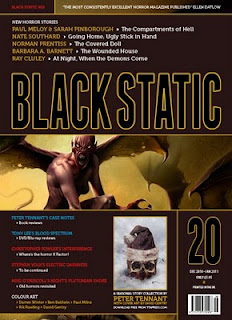 I'm sure everyone will agree, though, that the undoubted highlight can be found on page 52, where I guest review Bob Lock's The Empathy Effect (reviewed for TQF here by John Greenwood – I liked it quite a bit more than John did).

I'm exceptionally proud to have a piece of writing in Black Static, which was a terrific magazine even before it added (temporarily) my distinctiveness to its own!

A year's joint subscription to Black Static and the equally brilliant (but so far Theakerless) Interzone costs just £40.
Posted by Stephen Theaker