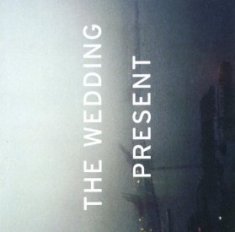 Time for another round-up of the dazzling discs dominating my five-CD stereo (which is beginning to show a few worrying signs of wear and tear – if it breaks down it’ll blow as big a hole in my work routine as, well, the day I found I could access Facebook via https, thus circumventing all my carefully laid keyword blocks at the router).

Last time I did a round-up I was having a big catch-up with New Order, and this time it’s been the turn of The Wedding Present, inspired by the imminent release of their new album, Valentina. This bundles up the four singles from Take Fountain, together with their b-sides, and a trio of lovely acoustic versions. Not everyone is keen on David Gedge’s voice, but I love it, for its sincerity and heart, yes, of course, but also because it’s easy to sing along with! I’ve tried singing along with David McAlmont and the results were not pleasant. I was intrigued enough by the added vocals on the Klee remix of “I’m From Further North Than You” to buy one of their EPs, and it’s very nice indeed, even if I can't sing along (whatever I learnt while taking GCSE German has been long forgotten).

Includes sessions nine, ten, eleven and twelve, covering the period from the Hit Parade to Take Fountain. Only just bought this box set, and so far this is the only CD I’ve listened to. At the time, I was a bit disappointed by the Hit Parade, when The Wedding Present released a hit single every month – I couldn’t bring myself to buy “Boing” – and Watusi, because to me they felt like a retreat from the more serious, grinding music they had produced with Steve Albini. But listening to them on here along with the excellent songs from Saturnalia and Take Fountain, the ups and downs of changing production styles evened out by consistent BBC engineering, it turns out I’m really keen on all these songs. Feels sometimes like the album I’d hoped they’d make after Seamonsters (one of my favourite albums of all time). The one thing that could have made this better would have been a few snippets of John Peel, like the one that introduces Mogwai’s Government Commissions.

I must look anxious, 'cause she fixes me with this gaze.
“Face it tiger, you’ve just hit the jackpot,” she says.

Can’t go wrong with a Spider-Man reference! This one’s in “Santa Ana Winds”. Add to that a bit of Seinfeld in “Soup” (chorus: “No soup for you! No soup for you!”), production by Steve Albini, and this has been an instant winner. I’ve been singing the wonderful track nine all around the house, changing the lyrics to “The Thing I Like Best About Me Is My Ranjna”. I think a lot of people would agree with that. Wish I’d heard about this album when it first came out. Somehow I missed it till now and I am well on the way to adoring it.

4. Doctor Who: Companion Chronicles: The Invasion of E-Space

The supply of new audio adventures has dried up a bit since I stopped reviewing for the British Fantasy Society, but I have a few older ones that I didn't get around to before: Big Finish are an extraordinarily productive company! This one features Lalla Ward as Romana, telling the story of an adventure with the fourth Doctor and Adric. I think it’s fair to say that my opinion of most of these has been more or less the same: never awful, never mind-blowingly brilliant, but always enjoyable. Review to appear in Theaker’s Quarterly Fiction #40.

The one music CD to survive the avalanche of Wedding Present and Cinerama purchases! (I bought the superb Cinerama Peel Sessions set too.) I like this, but coming straight after the Big Finish CD doesn’t do it many favours, since the first track, “Get to France”, sounds an awful lot like Big Finish’s incidental music. It always takes me a minute or two to realise it’s Mogwai. "Hound of Winter" is unusual for Mogwai, being a proper song with words, but is rather fab, while “Drunk And Crazy” is lovely and noisy. “Does This Always Happen” is classic Mogwai, but with strings.

At one point last month all five slots were taken up by Moby albums, so I carefully avoided doing a Fab Five round-up then. They’re great for working to, but I don’t think I could ever truly love them.

Away from the five-CD stereo, I’ve been listening to the Aphex Twin’s brilliant acid house collection Chosen Lords on the iPad. I’ll be buying the full set of Analord EPs just as soon as my bank balance recovers from paying last year’s income tax. I’ve also been listening to Ghosts I by Nine Inch Nails, which is pretty good, but not quite good enough to get me to fork out for Ghosts II–IV just yet.

The Wedding Present’s new single, “You Jane”, is out now, and there should be a video below. It’s a grower, honest, even if the video's not that great.