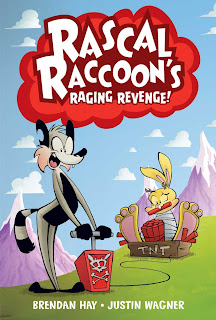 Rascal Raccoon is locked in an eternal struggle with Jumpin’ Jackalope, and one day, despite the terminal unreliability of his mail-order death-traps, he manages to kill him. Sort of: a pair of trucks do most of the hard work. Rascal is now a hero to other meanies, a monster to the merries, and a source of mixed feelings for Jackalope’s curvaceous widow Janey, who did once agree to go on a date with him. At something of a loose end without a nemesis, he agrees to help her find their creator and get him to draw Jackalope back to life, a mission that brings them into the “real” world.

Seeing analogues of Bugs Bunny and Wile E. Coyote battling in the early pages was quite novel for me (although apparently the two did meet in a small number of cartoons), and the death of Jumpin’ Jackalope, though expected, was mildly shocking, but after that the book struggled to keep my attention. The idea of cartoons interacting with the real world is hardly new: a version of Wile E. Coyote made it there in issue five of Grant Morrison’s brilliant run on Animal Man. Though you kind of feel for the raccoon and his lost purpose, Megamind was funnier, cleverer and more moving when dealing with the same themes. The art is okay but not outstanding, the lettering is basic, and the garish colouring works against the idea that it’s all animation (although, looking at the preview on Oni’s website, that last might have been exacerbated by a glitch in the pdf I’m reviewing from).

To be honest I was surprised to see this published by Oni—not that it’s utterly awful, just that their standards are usually so high. Buy an Animaniacs DVD instead.