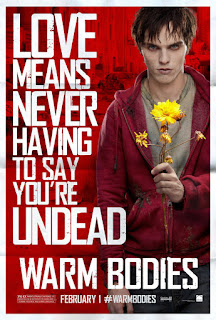 Introspective zombies? Hell yeah! R, the zombie protagonist of Warm Bodies (directed by Jonathan Levine), moves his finger in a circular motion and mumbles “more real” (I think it was) to explain to love interest Julie (a human) his preference for vinyl records. In this simple gesture, R captures the message of the zombie apocalypse/romantic comedy crossover Warm Bodies.

In an era of texting and tweeting and so many other technological temptations, this film gives credence to something that has taken a backseat in recent years: the face-to-face, technology-free relationship.

When Warm Bodies opens, R shuffles around a neglected airport with his zombie cohorts, and offers the viewer a treat that is a rarity in zombie films: inner monologue. That’s right, a sentient zombie. Seems preposterous, doesn’t it? But it works, and it adds to the film’s charm and humour. “This is what we are now,” thinks R. “This is a typical day for me. I shuffle around, occasionally bumping into people, unable to apologize or say much of anything. It must have been so much better before when everyone could express themselves, communicate their feelings and just enjoy each other’s company.” These thoughts are juxtaposed with a pre-apocalypse flashback in which the airport’s harried occupants, entranced by their technology, pay no attention to one another.

R and his best friend M go out hunting, where they encounter Julie and her crew on a medicine-seeking mission. R eats Julie’s boyfriend’s brains, then gains some of his victim’s memories about the young lady. Smitten, R rescues Julie from his hungry cohorts and brings her to the grounded airplane he calls home. As he gradually regains his humanity, R must keep his brethren and the even more threatening “bonies” (skeletal-like degradations of the zombies who’ve “given up”) from eating his find, while convincing Julie that he’s the corpse for her.

The chases and the fighting, compelling as they are, are not what makes this film a standout. Rather, Warm Bodies achieves its greatest allure in the quiet conversations in which R and Julie – don’t those names sound suspiciously similar to a famous literary couple? – get to know one another. In one fuselage scene, R plays Guns ’N’ Roses’ “Patience” for Julie. What a perfect anthem for what the film conveys.

Nicholas Hoult portrays R as a hoodie-wearing, shrugging, awkward young man. Take away the zombie makeup and add a smartphone, and he’s not all that different from the technology-
benumbed Gen Y male. While Teresa Palmer’s portrayal of Number 6 in I Am Number Four was a bit overblown, she plays a convincing, if not quite flawed enough, heroine in Warm Bodies.

If there were a zombie version of the Oscar’s (Zoscars?), Rob Corddry would deserve a “best supporting actor” nod for his role as M. Inspired by the blossoming relationship between R and Julie, M and his fellow zombies struggle to break free of the mindlessness that grips them. M’s clumsy quips (e.g. “Bitches, man.”) stand among the most humorous parts of the film.

Warm Bodies also serves as a declaration of the value of tolerance. When Julie brings R home to her zombie-hating father played by John Malkovich, R could just as easily be a person of another race, sexuality or religion.

At the risk of sounding fogeyish, I believe that technology, despite all its benefits, has a tendency to fragment people. Think about the dinner table at which Dad searches his tablet, Mom texts, Suzie updates her Facebook status and Timmy plays video games. Or what about the typical business presentation whose participants text, email, google… anything but listen to the speaker?

Warm Bodies and its references (e.g. record player, Polaroid camera, drive-through theatre) to a bygone era challenge viewers to put down the devices before they lose the elixir of the personal relationship. It holds out hope for that family, for those businesspeople and especially for those teens in the theatre who text throughout the film. In the film’s opening, R thinks, “I just want to connect.” One wonders how many young people, in a world full of violence, are having that same thought.