The God Engines by John Scalzi – reviewed by Stephen Theaker 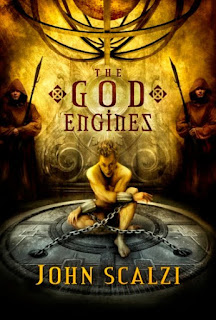 The God Engines by John Scalzi (Subterranean Press, ebook, 1223ll, originally published in 2009) opens with a classic first line: “It was time to whip the god.” That job falls to Captain Ean Tephe. The Righteous is powered by an enslaved god who must be punished if recalcitrant, with a whip whose handle is carved from the bone of a god, whose leather is godskin embedded with “first-made” iron, born in the heart of a star and never buried in the ground of a planet. Wounded gods can be healed with blood of the faithful, and thus each ship bears a complement of priests and acolytes; the book has no mention of engineers. The god worshipped by Tephe and his people long since enslaved his rivals, establishing dominion over this part of the galaxy, but the god powering the Righteous is not unique in his rebellion. The Righteous is thus sent on a mission to a world of people who do not yet worship any god (despite my groans when this world was first mentioned, it isn’t Earth!), whose faith will thus be of the most powerful kind: first-born, freely given. Mission success will gain Tephe a promotion but take him away from his sweetheart; a happy outcome for him seems unlikely.

Although this is not a book that quite explains the author’s stellar reputation (the same could be said for the individual works of many science fiction greats; it’s a genre where great reputations are often built on consistently good bodies of work), I enjoyed it, especially the depiction of Captain Tephe and first mate Neal Forn, good men caught in a bad system. They are like children taught that believing in god is enough to make them virtuous, here tested to their limits by revelation. The gods of the book are interesting, each of them different: Tephe’s ship is powered by a Loki-esque trickster, while others are dignified, quiet, grovelling, obsequious. Those mentions encourage the reader’s imagination to wander past the book’s few pages to imagine what else is going on in this universe. The mixture of religion and space war makes it strongly reminiscent of Warhammer 40,000, while there are shades of Firefly in the sexual healing offered by the on-board Rookery and the Captain’s feelings for his head rook, but such comparisons are almost forgotten as the book plays its trump cards: the brilliant first line is matched by a climactic succession of memorable and surprising scenes, leading to a horrific and emotional conclusion.
Posted by Stephen Theaker