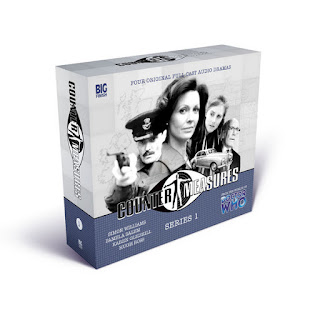 Doctor Who spin-off Counter-Measures, Series 1 (Big Finish, digital audiobook, c.4 hrs, plus 65 mins of bonus features) follows on from one of the seventh Doctor’s best television adventures, Remembrance of the Daleks. Some of the soldiers and scientists who helped him face down two Dalek armies, in particular Group Captain Ian Gilmore (Simon Williams), Professor Rachel Jenson (Pamela Salem) and Alison Williams (Rachel Gledhill), come together again to form a special counter-measures group for responding to such “insurgencies”. As you might expect from that, it’s quite reminiscent of Torchwood, if it were set in the sixties, or English black and white science fiction films of that period.

In the first adventure, Threshold, by Paul Finch, the coalescing team has to investigate the activities of Professor Heinrich Schumann, a former Nazi scientist (played by Vernon Dobtcheff) whose experiments in teleportation have attracted the attention of something… from beyond! The long single episode format makes the story feel rather special, and the cast is excellent. As ever, Big Finish’s talent for sound design delivers the goods; whether in headphones or through a surround sound system it all (notably the throbbing teleportation machine, and a talking doll animated by an alien intelligence) sounds marvellous. A very good start to the series.

Episode 2, Artificial Intelligence, is by Matt Fitton, who puts the team up against a psychic computer, a “learning intelligence” built to run a spy network – and it speaks with Professor Jenson’s voice, thanks to a spot of industrial espionage by former colleague Professor Jeffrey Broderick (Adrian Lukis); all great fun. A neurochemist working on the project, Czech defector Dr Nadia Cervenka (enthusiastically voiced by Lizzie Roper), has a romantic past with Group Captain Gilmore that goes back to post-war Berlin; the encounter reveals how passionate Gilmore is about helping those who need it, even those who were on the other side of the war.

There are shades of Moonraker and Quatermass II (the latter perhaps acknowledged by the use of “Keir” as a pseudonym) in episode 3, written by Ian Potter, as the team investigate The Pelage Project. Pelage, a new industrial town, has sprung up out of nowhere with government approval, and fish nearby are dying in their hundreds, all at once, of “massive necrotic metastasis”. Like the first two episodes, this story features a memorable aural element: in this case an oppressive, controlling tannoy announcer (“Onward and upward!”), but the orders come from the Alan Sugar type who built this town of biddable workers to serve his construction plant: Ken Temple, played with by belief and gusto by Stephen Grief. He’s a man with both eyes on the future, and he expects the worst.

Episode 4, State of Emergency by Justin Richards, was for me the best of the series, featuring a fine turn from Duncan Wisbey as Prime Minister Harold Wilson. After Winston Churchill’s excellent team-ups with the eleventh Doctor, it’s only fair to have a Labour PM given a similar chance to shine, and Wilson’s well-known terror of a military coup provides the basis for an excellent story that feels like a proper season finale. As Sir Toby Kinsella, manipulative controller of the Counter-Measures group, Hugh Ross is superb in all four stories, each line delivered with the lizardly drawl of a Sir Humphrey Appleby, and this story seems him at his best.

A fifth CD/file takes us behind the scenes, and there’s the usual mix of straight-talking and polite professionalism, with the odd moment that hints at hurt feelings and creative disagreements along the way. One concern discussed is the need to distinguish the stories from U.N.I.T. adventures, which is why Professor Jenson, by way of a slightly awkward conversation in episode one, ends up in charge rather than Group Captain Gilmore.

Taken as a set, Counter-Measures, Series 1 is very satisfying. There’s a good team of characters, each with interesting, distinctive voices. Ongoing storylines, such as Alison’s relationship with her beau Julian, build gently without detracting from the stories’ individuality. Each of the four stories is a substantial adventure and all are deeply rooted in the period’s politics, hopes and fears, making the sixties setting much more than atmospheric window dressing. It would be easy to say that this would be good enough to appear on Radio 4, but in fact I like it rather more than most of the drama I hear on there. Despite all the Who stories and spin-offs they’ve already produced, Counter-Measures shows that Big Finish are still finding new corners of that universe to explore and new stories to tell.