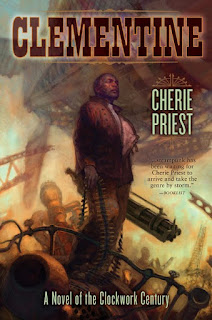 As Clementine by Cherie Priest (Subterranean Press, ebook, 2508ll) begins, the American Civil War has ground on for twenty-four years or so, rather than lasting from 1861 to 1865 as it did in our history. Airships sail the American skies: from huge armoured battleships down to speedy two-seaters (for passengers who don’t mind a stiff breeze). Slavery persists in the south, and strange things are going on up in Seattle. Across these disunited States, in a tiny, nameless airship, flies Captain Croggon Beauregard Hainey – one of the twelve Macon Madmen, who “made a big, nasty show of escaping from the prison there in ’64” – and his two men Simeon and Lamar, in pursuit of the Free Crow. His ship has been stolen by the scoundrel Felton Brink, renamed the Clementine, and sent cross-country with a mysteriously heavy load. Southern lady Miss Maria Isabella “Belle” Boyd has been sent to stop him by the Pinkerton Agency, but an encounter with an old friend will bring her older loyalties to the fore.

The TQF41 editorial discussed Lavie Tidhar’s comment that “Steampunk was fascism for nice people”, with regard to the apparent failure of some steampunk fans and writers to acknowledge the less pleasant sides of the nineteenth century. That certainly isn’t the case here. Our protagonists are a black captain who can’t visit some states – who can save a man’s life and still not be allowed to drink in his bar – and the white woman who could have a noose around his neck with a single scream. But though we sympathise with the prejudice Hainey encounters, we’re not asked to admire his thievery and killings, and he’s shown to be something of a sexist, insulted that a woman has been sent to bring him down – at least until he realises who she is. Belle is a former actress and sometime spy, who’s “been in prison a few times, been married a few times, and killed a few fellows if they interfered with her”. Each chapter is told from either his or her point of view, and we only see the villain when they do, which keeps the novella nicely focused.

Though this isn’t a book you would note for its magnificent prose, it tells its story effectively with a minimum of fuss. Action and adventure is the order of the day, with a flavour of Star Wars to many scenes. I appreciated the novelty of the setting, even if I imagine many of its attentions to American history passed unnoticed by this English reader. The plot is straightforward, but the characters have richly conflicting loyalties: Hainey to his men, his duty, his own skin; Boyd to the south, to Pinkerton, to decency. They unite in dislike of villain Ossian Steen, aptly described by an otherwise polite nurse as a “wicked bastard”, “a fiend, and worse” – he’s the most believable kind of villain: the one that thinks he’s the good guy, even as he terrorises old men, women and children.

Like the other Subterranean Press ebooks covered in this issue [TQF42], this is an older title (it’s from 2010) recently made available at a very reasonable price. All are well worth reading, though you may quickly come to share my frustration at the unfortunate (and presumably unavoidable) region restrictions on many of the publisher’s ebooks.
Posted by Stephen Theaker